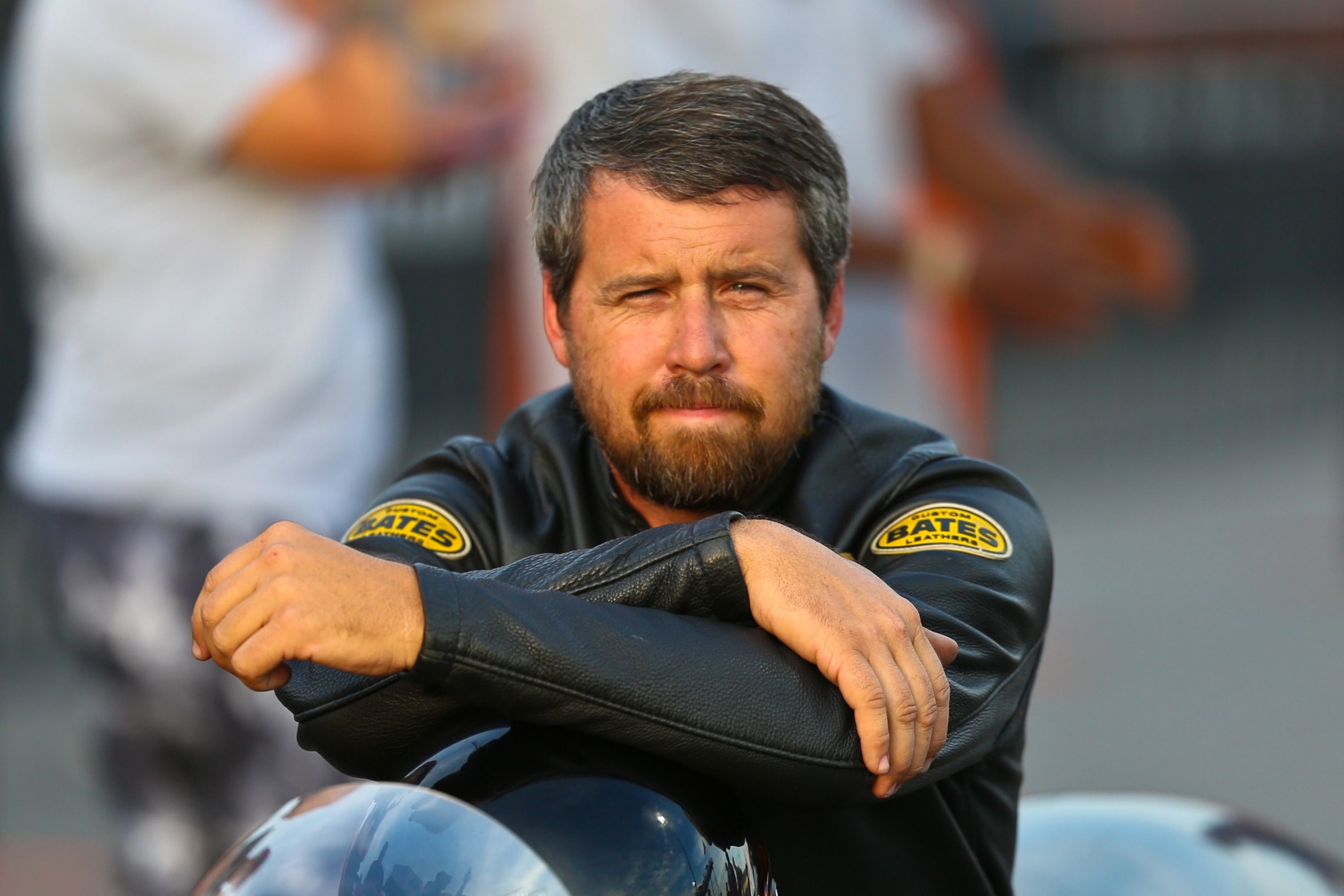 Travis Davis has been around motorcycles his whole life. His father, John, owned a motorcycle shop when he was growing up, so it was no surprise to Davis’ family and friends when he took an interest in racing motorcycles. At first it was motocross, but like more than a few motocross riders turned drag bike racers, Davis eventually realized racing bikes down a smooth, paved strip of asphalt was a lot safer.

“After a few broken bones and injuries [in motocross], you kinda figure that ain’t the route you need to be going,” Davis laughs. “That’s when I started drag racing. The first bike that I rode was a little small-tire bike that would run 5.90s. I made six passes on it, then jumped on a turbo bike that would run 4.20s. That was back in ’99 or 2000.”

Davis raced in the AMA Pro Star series, an all-motorcycle organization, where he won the Funny Bike world championship in 2003. He raced in the Funny Bike class for several years before purchasing a Pro Mod-style nitrous bike from his longtime friend and current competitor, Ashley Owens. He ran that bike in ADRL Pro Extreme Motorcycle before moving over to PDRA competition after the series launched in 2014.

Davis still races a methanol-fueled turbo bike in addition to the race gas-burning nitrous bike he fields in Drag 965 Pro Nitrous Motorcycle. He even won the XDA Pro Extreme world championship this season with the turbo bike, all while chasing his third PDRA title.

“Luckily, this year some races got canceled that were on top of that deal so I would just go from one to the other and they never conflicted with each other this year,” Davis says of running two different series. “It’s a lot of time away from home, a lot of time away from work. Just keeping both of them prepared for the next race is tough to do. It’s a lot of difference in the riding and the tuning side of it. The nitrous bikes run 175 mph and my turbo bike runs 185 mph in the eighth mile.” 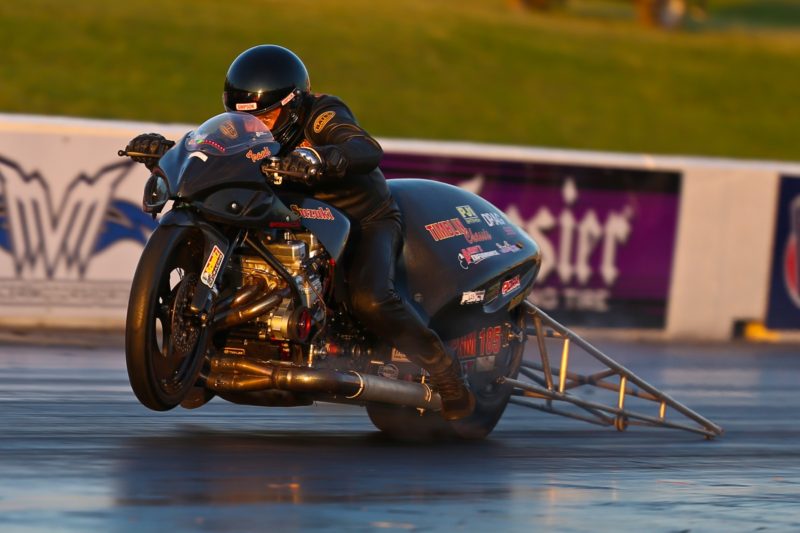 After securing the XDA championship, the Douglas, Georgia-based rider returned his focus to the PDRA championship chase. He had a solid lead over perennial championship contender Chris Garner-Jones going into DragWars presented by Modern Racing at GALOT Motorsports Park in early October. The two riders ended up facing each other in the first round of eliminations. Garner-Jones left two-thousandths of a second sooner than Davis, but Davis rode around him with a 4.069 at 175.09 to beat Garner-Jones’ 4.084 at 171.49, securing the title in the process.

“Chris is a tough competitor and you have to bring your A game,” Davis says. “I put a pretty good tuneup in there that I thought would do what it had to. He matched me on the tree – actually was a couple numbers better than me. We got lucky and turned the win light on.”

Luck had little to do with Davis’ success over the last several races. Out of the four PDRA races where the class competed, Davis won three and runnered-up at one, with Paul Gast being the only rider to defeat Davis in PDRA competition. Davis attributes the consistent success to years of data and a durable engine combination.

“Last year at the end of the year I switched over to this new cylinder head that Monster makes,” Davis says. “This year, this motor hasn’t been apart this whole season. I go home, I check it, look over it, leak it down, nothing’s wrong with it, so I send it to the next race. It’s been real easy on parts this year. The performance side, we still struggle with that some. Maybe by Virginia we can figure out how to get back into the 3.90s like we have been. The biggest thing is zero parts failure.”

Davis also credits the people and companies who support his racing program. His wife, Brandy, and their son, Brayden, go to the races with him and help at every step of the process. His father and his stepmother, Tracy, support the team at home. Davis’ “number-one fan,” Donna Broadway, also regularly travels to the races to cheer on the Davis team. Other supporters include Timblin Chassis, Fast By Gast, MTC, Schnitz Performance, Worldwide Bearings, Perry’s Performance, Cycle Masters, Nettles Cabinets, Kipp Pittman and Shot Gun Graphics. Davis is also always sure to thank Drag 965 for sponsoring the class.

Travis isn’t the only Davis racing at PDRA events, as Brayden is also a championship racer in the series’ Jr. Dragster classes. The father-son duo won world championships together in 2017 when Brayden won the Top Jr. Dragster title, then they shared the winner’s circle together at the 2019 World Finals. Though he still has a couple years left in Pro Jr. Dragster, the younger Davis is already eying up the two-wheeled machines.

“He’s just waiting until he reaches the age to be able to get on these bikes,” Davis says. “We’ll slowly bring him up to speed on these things, but he’s got his heart set on racing these motorcycles in the future. He’s a real, real talented bracket racer. He’s won a lot of races, won a lot of good money races that people put on down here. Even though we’ve struggled this year in Pro Jr., just to get qualified, it’s just a tough field to get in. He’s very talented at what he does.” 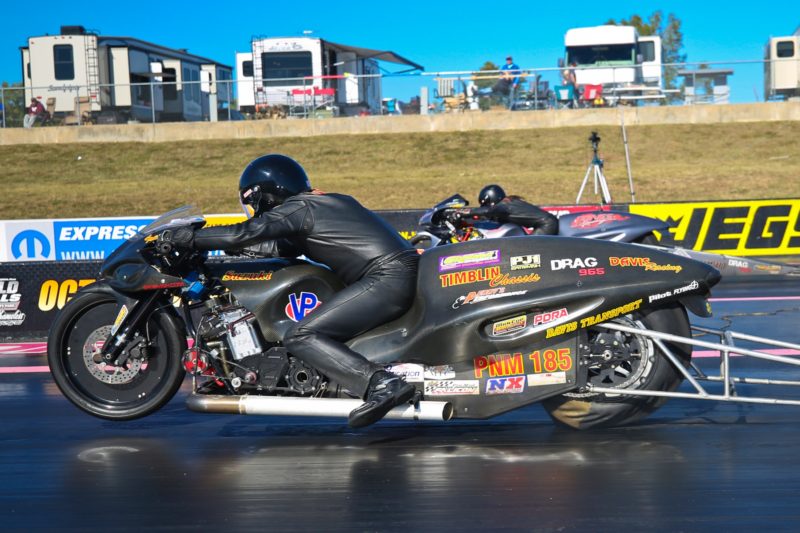 Given everything he’s learned at the track, Brayden will likely take after his dad, possessing skills in the riding and tuning departments.

“Most of the time, he can probably tune as good as I do because he’s been brought up in it,” Davis says. “He can hear the bike go down the track and he knows if I missed a gear change or it’s too rich or whatever, he knows. When he gets older, he’s definitely going to be a forced to be reckoned with.”

While some father-son teams in drag racing have raced side by side in the same class, Davis says he’ll probably prefer to be behind his son on the starting line, not next to him in the other lane.

“I think I’m going to just pass the torch,” Davis says. “I’ve always just enjoyed the tuning part of it. I’ve rode these things for so many years. I still enjoy riding them, just not as much as I enjoy tuning them and trying to get it to the next level. I’m just going to be the guy standing on the starting line sending him down the track.”