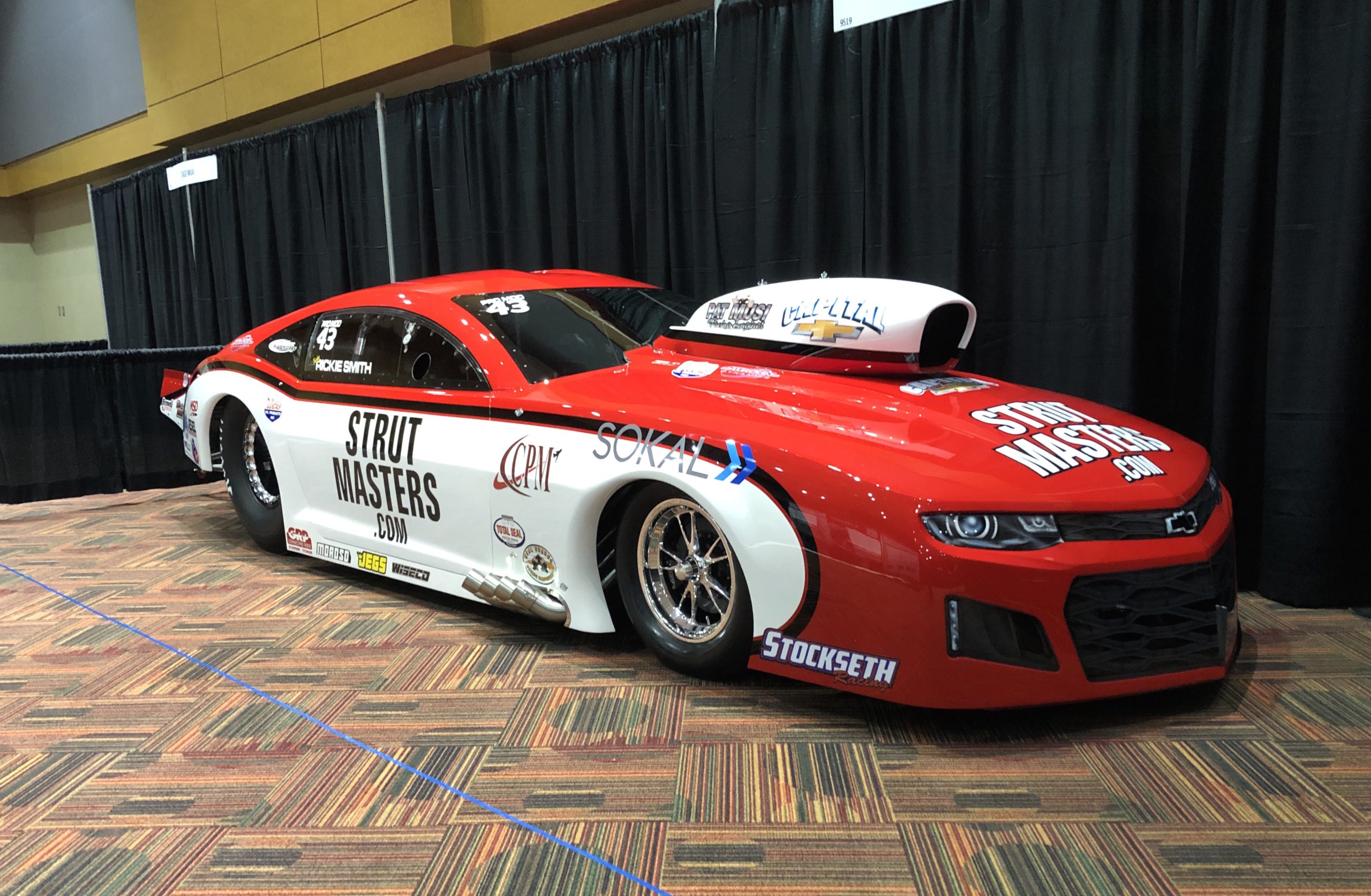 Rickie Smith sent out two sponsorship proposals to two different companies less than two months ago, knowing full well it was late in the season to be trying to procure a sponsor for 2020.

Within just a few hours he got a response and, from there, it didn’t take long for Strutmasters to commit to the Pro Mod legend.

He talked with Chip Lofton on a Tuesday, was in their Roxboro, N.C. office two days later and had a sponsorship deal for 2020 signed, sealed and delivered just hours later. Smith has enjoyed a career filled with championships and big-time support from quality sponsors, but never has a deal come together this quickly.

“I had no idea when I went down there I would come out with a deal,” Smith said. “I left there with a signed deal with everything done. It’s just awesome when you can come away with a new sponsor. It was so late in the year, but it just came together. I’m tickled to death to work with Chip. He came in and helped, and it’s just a pretty awesome deal.”

The good news doesn’t stop there. Strutmasters.com will be the major sponsor on the side of Smith’s new 2020 nitrous Camaro from Jerry Bickel Race Cars.

He just took delivery of the Musi Racing Engines-powered Camaro on Monday, revealing the car and new sponsor on Thursday at the PRI show in Indianapolis.

The new Musi motor hasn’t been on the dyno yet and everything on the car is brand new – including the sponsor – giving Smith, a three-time NHRA Pro Mod champ plenty of enthusiasm heading into 2020.

After a tumultuous year, the longtime veteran feels reinvigorated and energized with the new season approaching.

“All of it puts a little life in you. When a guy like (Chip) picks you up, it was absolutely a good boost for me,” Smith said. “The new car is awesome. We changed a few things on the chassis, but we’re interested to run the car and get some laps on it.”

Smith expects to test in Florida early next year to get the nitrous Camaro set for the NHRA opener in Gainesville.

A year ago, Smith was preparing for his debut in a turbocharged Mustang, an experiment that quickly went off the rails.

He was back in the nitrous car by midseason, going on a solid run that included back-to-back No. 1 qualifiers, two straight finals appearances and a win in St. Louis. But Smith also split with longtime teammate Khalid AlBalooshi and skipped the finale in Las Vegas, putting an end to an adversity-filled 2019.

At the tail end of the turbulent finish, though, Smith sewed up the deal with Strutmasters.

He met with Lofton a week before the event in Las Vegas, and was blown away with how fast the deal was done. It was a bright spot to end the year, assuring Smith he went about things in the correct fashion.

“I emailed a couple proposals and within 3-4 hours, Chip emailed back and said, ‘I’m interested.’ We texted back and forth and he asked when I was going to come down,” Smith said. “I said I could be down there on Thursday, and a couple hours later he said he would do the deal. I left there that day with everything done.”

Smith was still partially in shock, but in Lofton’s mind, it was an easy decision.

“Growing up in the Carolinas and being a Pro Stock fan and a Pro Mod fan, I never thought I could reach this place where I could sponsor him,” Lofton told Competition Plus. “He lives to race and races to live. He’s been one of those guys that has figured out a way to do it.”

It’s left Smith, a 15-time winner in NHRA Pro Mod, excited about the possibilities for 2020.

“We’ll see what we can do, but it definitely sparked us,” Smith said. “We’re back to what we’re used to doing.”