While Mike Bowman’s racing path has moved away from Pro Modified since winning the inaugural Drag Illustrated World Series of Pro Mod at Denver’s Bandimere Speedway in 2017, the 2023 edition of the $100,000-to-win invitational is bringing the Street Outlaws: No Prep Kings standout back to Pro Mod.

The California native has briefly paused the sale of his ’69 Chevelle and is feverishly working to prepare it for WSOPM competition March 3-5 at Bradenton Motorsports Park.

“The car was for sale, but I haven’t sold it yet, so I needed to make a decision. And that is to go back one more time,” said Bowman, who defeated Steven Whiteley in the $100,000 final round at the 2017 WSOPM. “The thing about this race that intrigued me the most was it is going to be the baddest of the baddest dudes in door cars, period. There’s none of this excuse about Denver and the air and I don’t want to do it because of this, that, or whatever. Just being a part of it is pretty special.”

Bowman, who’s competed in numerous different classes with multiple different power adders over the course of his career, has been focused on No Prep Kings competition for the past couple seasons. He put his current ’69 Chevelle Pro Mod, a replica of his WSOPM-winning car, up for sale to help buy two new motors for his NPK Chevelle.

Since the 2023 WSOPM was announced, Bowman has gone back and forth regarding his decision to compete in the event. After the Performance Racing Industry (PRI) Show in early December, the temptation was too much for Bowman. He decided to hang on to his car, accepted his lifetime invitation as a past DI Pro Mod event winner, and went to work ordering parts and making changes to his Jerry Bickel-built Chevelle. Those changes include switching from a twin-turbocharged powerplant to a new ProCharger-boosted Pro Line engine.

“There’s a whole lot to do in a month’s time to be able to have February to get down to Florida and start testing there. We want to know that we’re 100% competitive when the time comes when we get there,” Bowman said.

When Bowman won the first WSOPM, it was a quarter-mile, NHRA-legal race featuring 16 invited drivers at Bandimere Speedway, a mile above sea level. For the 2023 edition, over 40 invited drivers will attempt to qualify for the 32-car field. The race will use an outlaw eighth-mile format, and Bradenton Motorsports Park is situated along Florida’s Gulf Coast just above sea level. Bowman realizes this WSOPM will be much different race than the one he won.

“There’s more cars in the field, they’re going to be faster, and the way that I see it, when qualifying ends, you’re going to have 32 of the fastest Pro Mods in the world,” Bowman said. “I just want to be a part of that. I won’t feel like I succeeded if I don’t at least qualify. Because if you qualify, you have a chance to win the race. You have a one-in-32 shot of winning that race.” 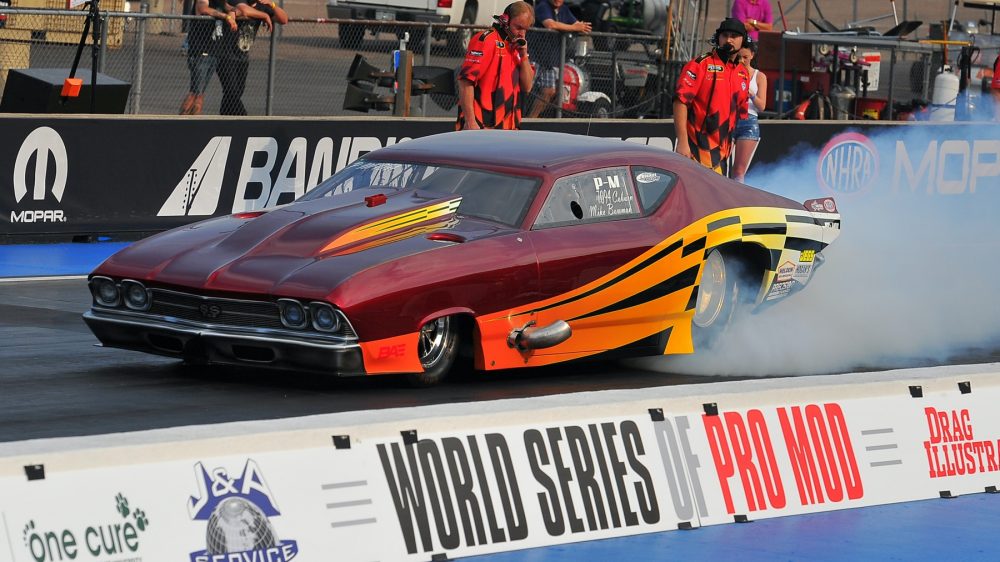 It’s not just the quantity of drivers and cars that makes this year’s WSOPM different for Bowman. It’s also the quality of the competitors. The list of invited drivers includes the 2022 champions in nearly every Pro Modified class or series, record holders, and star drivers from across drag racing.

“Winning the first one means the world to me, and I think that nobody can ever take that away from me,” Bowman continued. “But man, if I could go there and win that again, against the baddest of the baddest dudes in the world, that would be insane.

“It’s racers from other places, all the different champions, all the different organizations,” Bowman continued. “When you think about that as a whole, that’s a hell of a group of people. So why wouldn’t I want to be a part of that when I actually have the opportunity to do it? Nothing better than that. Not in what we do. I am all in with the No Prep Kings and all that, but this was just too much for me to walk away from if I have the opportunity to do it.”

Bowman understands he’s going into the race a step or two behind many of the other competitors. He hasn’t raced his current Chevelle Pro Mod since late 2019, plus he’s bringing a new-to-him engine combination. But as a past WSOPM champion, Bowman has the advantage of knowing what it takes to win and what comes along with a win.

“I feel like I got a lot of pressure on me to come and perform well, because I expect it and I would think that some of the others do too,” Bowman said. “This is probably one of the biggest challenges that I’m going to face. I don’t think there’s going to be too many lucky rounds. If you win this race, you’ve beat five of the baddest dudes there are along the way. It’s not going to be any better than that for anyone. Whoever wins this race, it’s going to be so special for them, probably more so than they even understand. That’s all I can say. If you win this race, it’s better than any race you’ve ever won, period.”

Tickets for the World Series of Pro Mod are on sale now. Visit www.WorldSeriesofProMod.com to order tickets and learn more about the race.