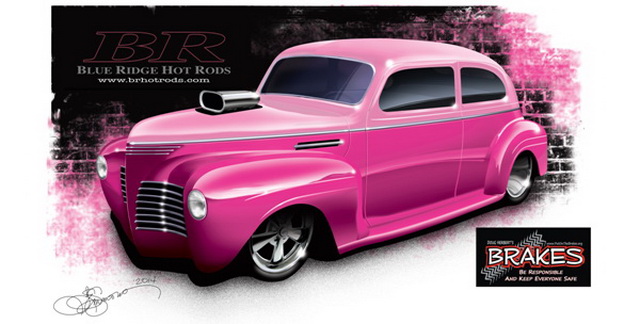 The proceeds from the sale of the two-tone pink hot rod will be donated to B.R.A.K.E.S. (Be Responsible And Keep Everyone Safe), the 501(c)3 organization founded by Herbert, that teaches young drivers greater levels of skill and concentration when behind the wheel.

Shirley’s son, John Muldowney, was responsible for fabricating the custom chassis and handling the initial build for the unique machine. The final construction of the “Grocery Getter” will be performed by Loren Harris and his crew at Blue Ridge Hot Rods in Staunton, VA, (www.brhotrods.com) who are donating their time and talents toward the completion of the project.

“Blue Ridge Hot Rods is very excited to be the shop chosen by Doug and Shirley to make this hot rod dream a reality for the B.R.A.K.E.S. foundation, “ says Harris, whose shop has turned out a long string of award-winning street rods and customs.

“This is going to be a major undertaking by everyone,” says Herbert, who also owns and operates the Herbert Performance Parts Center in Concord, NC. “We’re planning on having the car completed by summer of this year and to take it on a show car tour around the country. Shirley and I have even talked about taking it on the Hot Rod Power Tour.

“We hope to see six-figure bidding for such a quality hot rod with Shirley Muldowney’s name on the title.”

“The job that Doug has done with B.R.A.K.E.S. helping kids to become such better drivers makes me even prouder to be his friend,” says Shirley. “I’m hoping the proceeds from the sale of the ‘Grocery Getter’ will make it possible for even more young drivers to stay safe and avoid making a serious mistake out on the roads.”

For more information on B.R.A.K.E.S. or to make a tax-deductible donation, please log on to www.putonthebrakes.com