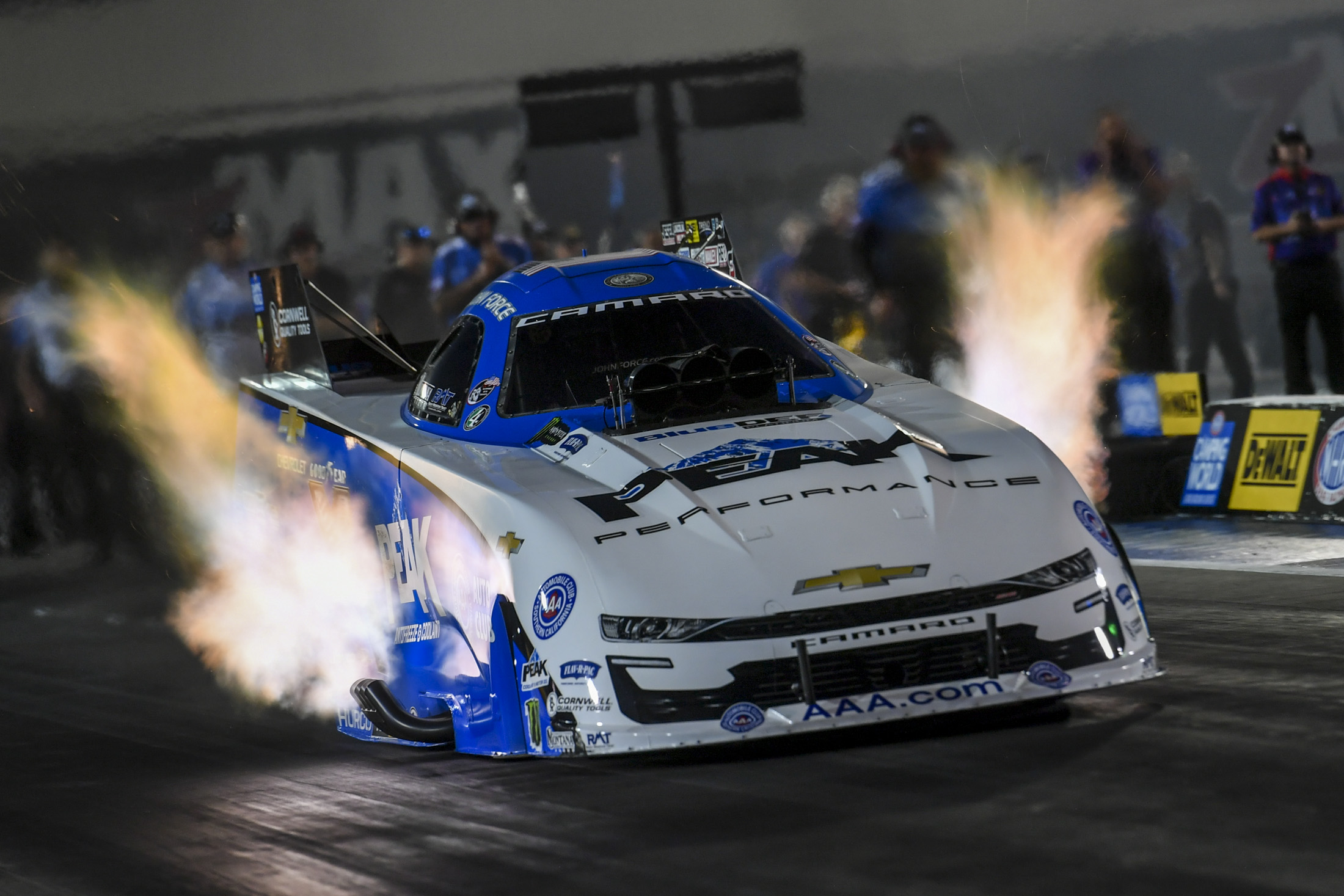 Funny Car points leader John Force drove his way to the No. 1 spot for the 163rd time in his career, taking the top qualifying position on Saturday at the DeWalt NHRA Carolina Nationals at zMAX Dragway.

Brittany Force (Top Fuel), Aaron Stanfield (Pro Stock) and Steve Johnson (Pro Stock Motorcycle) also qualified No. 1 at the 15th of 20 races during the 2021 NHRA Camping World Drag Racing Series season and the second race in the Countdown to the Championship playoffs.

J. Force’s run of 3.860-seconds at 332.18 mph from Friday in his 11,000-horsepower PEAK Antifreeze and Coolant Chevrolet Camaro held up, earning his third No. 1 qualifier of the season. His daughter, Brittany, joined him at the top in Top Fuel, marking the fifth time the father and daughter have shared the No. 1 spot together in their career, and the second time in the past three races. The standout Force combo both qualified No. 1 at each of the two Charlotte races this season as well. J. Force will now look for his fourth win this season taking on a loaded Funny Car ladder.

“It’s going to be tough, but it feels really good for my guys and we’ll see how it goes tomorrow,” J. Force said. “I love to see Brittany do well. She’s got a lot of my personality, she’s a good racer and I’m proud of her. It’s exciting for me to watch her excel. It’s Countdown time and now it’s time to show your stuff. There’s 5-6 cars (in Funny Car) that can take the lead and we’ll see how it goes.” 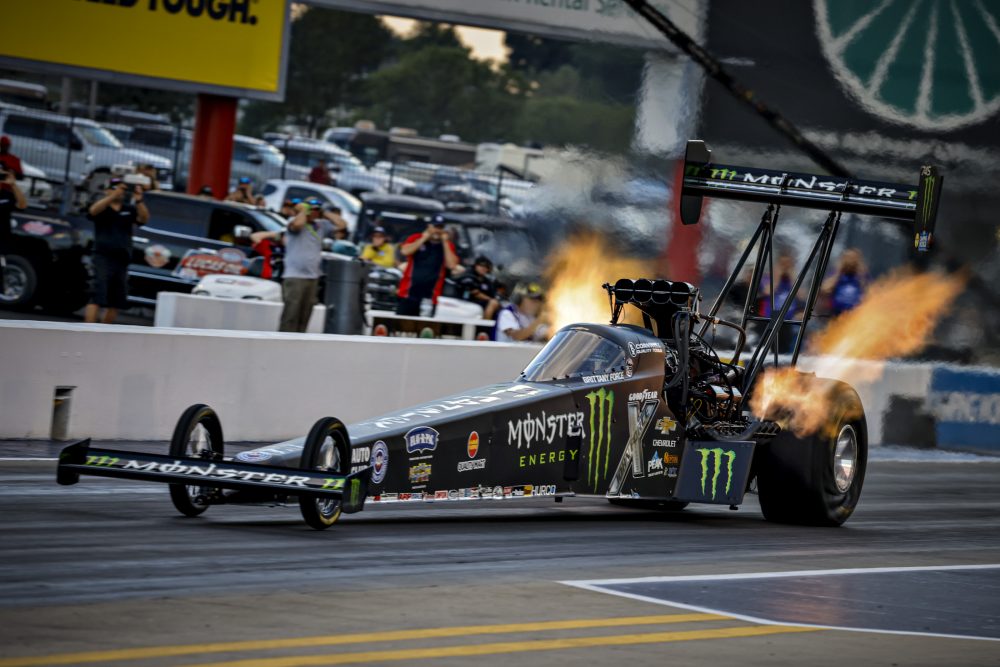 B. Force stayed atop Top Fuel thanks to her standout run of 3.662-seconds at 331.85 mph on Friday in her 11,000-horsepower Monster Energy dragster. It is her eighth straight No. 1 qualifier, which is the longest qualifying streak in a single season in Top Fuel history, 10th this season and 30th in her career. Force also made the quickest run in each of the three qualifying sessions for the second straight race, giving her a one-point lead over Steve Torrence heading into eliminations, where she will open raceday against Artie Allen in the first round.

“There’s nothing like getting three solid runs in down the racetrack in qualifying before going into eliminations,” B. Force said. “We feel good about it and we had solid consistent runs, and we’re looking to have a long day. For us, we want to throw down every single run and grab the best number we can, and that seems to work for our team. We have to stay focused and we’re going into this one round at a time. To share No. 1 (with her father), it’s special and something I’ll always remember.” 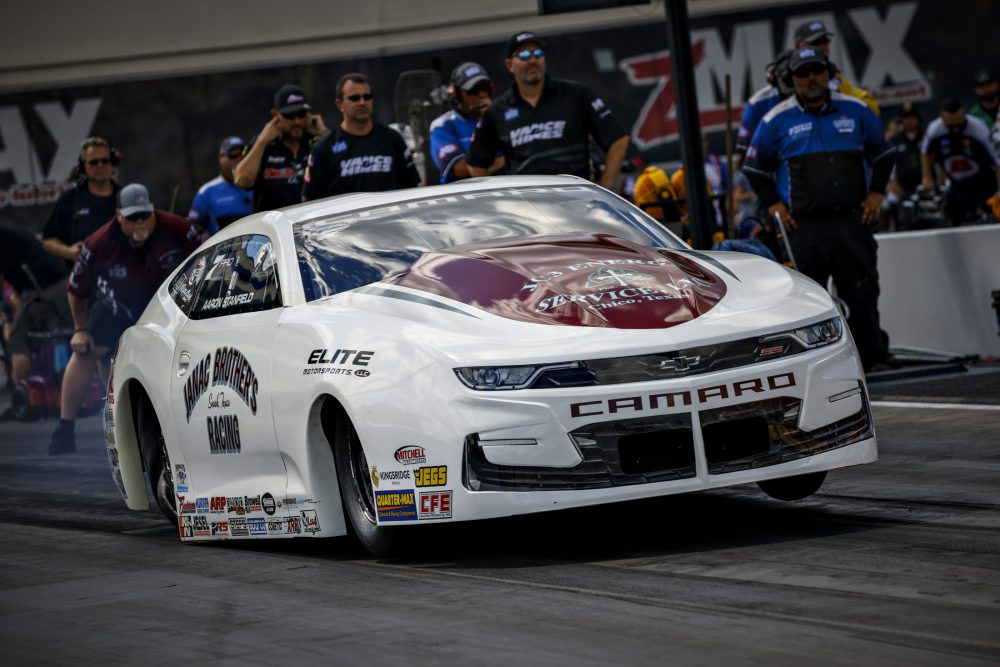 For the first time in his Pro Stock career, Stanfield is the No. 1 qualifier as his run of 6.575 at 208.59 in his Janac Brothers Chevrolet Camaro held up from Friday. Looking to make a big move after a second round exit in the Countdown to the Championship opener, Stanfield did that in qualifying and will take on Wally Stroupe in the first round of eliminations. Competing in his first Countdown to the Championship, Stanfield, who is third in points, is searching for his fourth win this season.

“It’s really cool and a testament to how hard these guys at Elite Motorsports work,” Stanfield said of qualifying No. 1 for the first time. “I’m the lucky one who gets to be behind this really fast hot rod and it’s been a blast. Hopefully we can carry momentum into raceday. If I can stay on my game behind the wheel and we make the right calls, hopefully we can have a long day.”

Defending world champ Erica Enders stayed second thanks to her 6.578 at 208.49 from Friday and Greg Anderson qualified third with his 6.580 at 208.39 from the first qualifying round. The points leader made the quickest two qualifying runs on Saturday, taking momentum into Sunday as he attempts to pick up his 98th career win and move past Warren Johnson for the most wins in Pro Stock history. 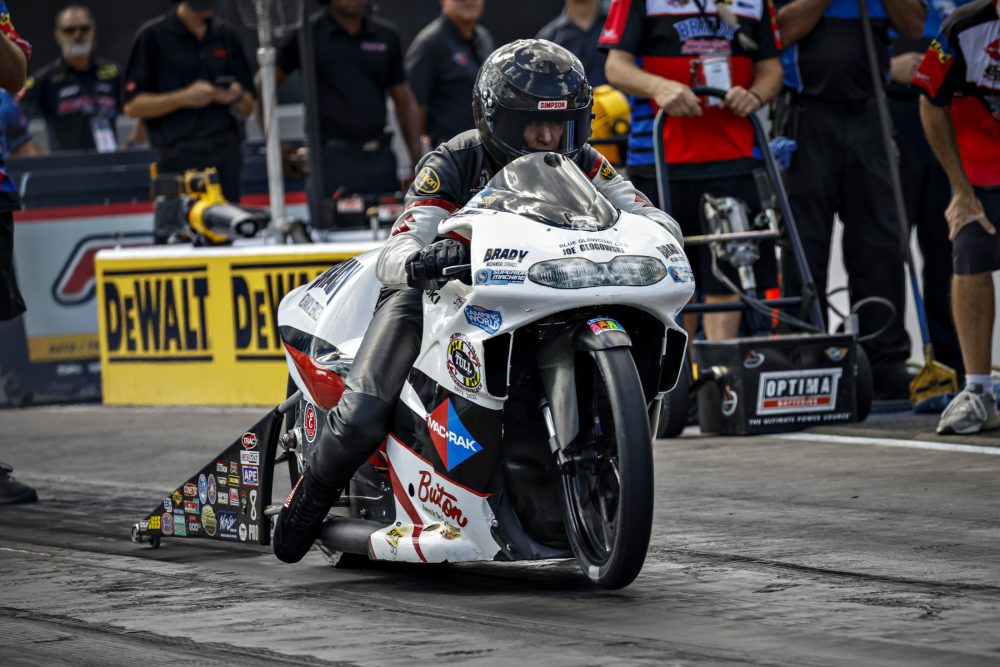 Johnson turned in another standout day on his Mac Rak/Slick 50 Suzuki, improving from Friday’s run and qualifying No. 1 with a stellar pass of 6.788 at 197.74 in Pro Stock Motorcycle. It gives Johnson his second No. 1 qualifier this season, marking the first time in his career he has qualified No. 1 two times in a season. The points leader dominated in qualifying, making the quickest run in all three sessions and taking plenty of momentum into eliminations. Johnson is after his second straight win in the playoffs and following his impressive performance in qualifying, he feels good heading into raceday.

“I love the education of this. I’m learning so much,” said Johnson, who also won the spring race at Charlotte earlier this year. “We were pretty darn proud of that run and I’m proud as heck with how we’re running. I’m extremely pleased with this and we’ve never run like this before. It was all really, really small adjustments. The first run (Saturday), we got to learn from Q1 and we made little tiny adjustments and I rode it better.”

In the E3 Spark Plugs NHRA Mod Pro Mod Drag Racing Series presented by J&A Service, Justin Bond drove to the No. 1 spot in his ProCharger-powered Bahrain 1 Racing Camaro with a run of 5.775 at 246.71. It is his third No. 1 qualifier in four races and his fifth this season. Indy winner Jeffrey Barker is second after going 5.784 at 250.18 and points leader Jose Gonzalez is third with a 5.786 at 247.93.

Eliminations for the DeWalt NHRA Carolina Nationals at zMAX Dragway begin at 10:30 a.m. ET on Sunday.