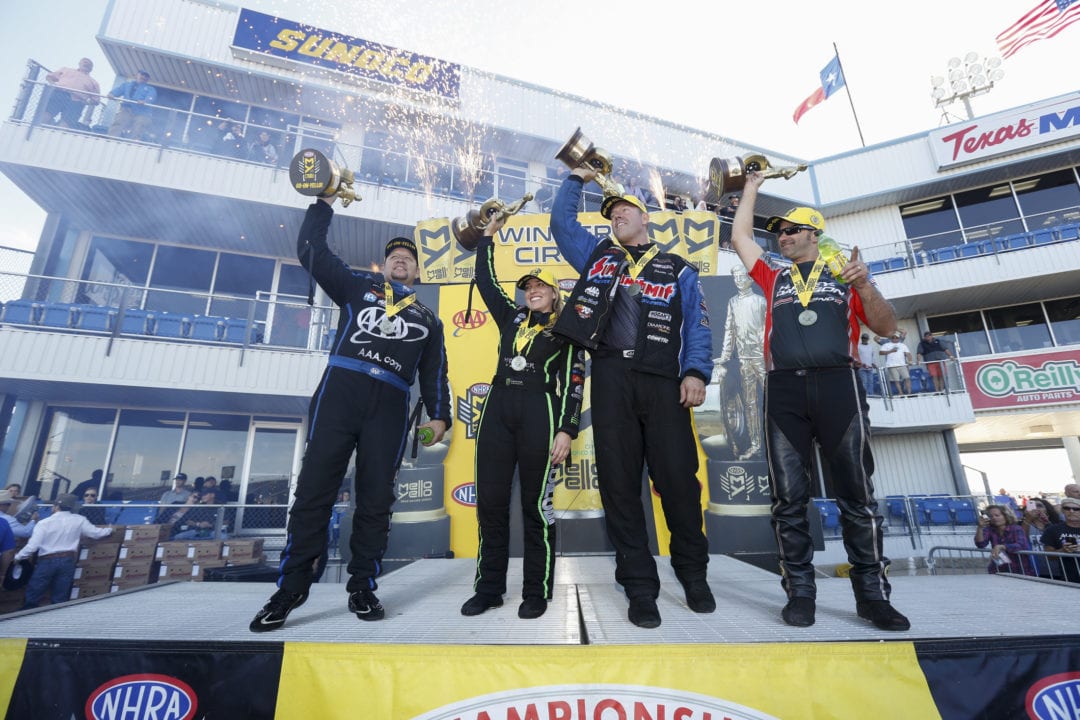 Hight raced to a 3.877-second pass at 332.34 mph in his AAA of Texas Chevrolet Camaro SS to defeat reigning world champion and category points leader Ron Capps’ 3.927 pass at 329.18 in his Napa Auto Parts Dodge R/T in the Funny Car final. It is Hight’s fourth win of the season, 41st of his career, third at Texas Motorplex and second in the 2017 NHRA Mello Yello Drag Racing Series Countdown to the Championship. Hight remains second in the points standings with Capps in first by just 24 points. 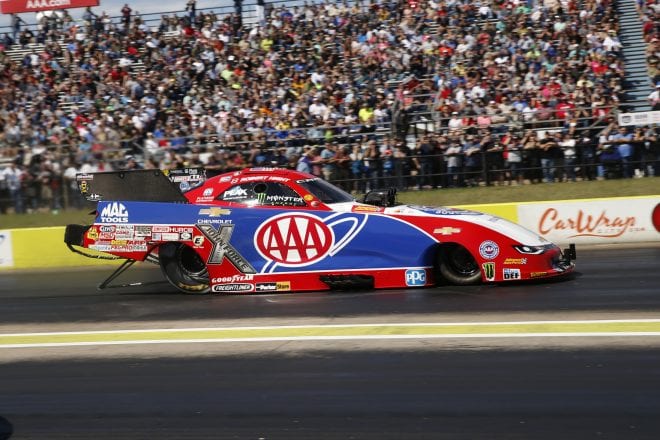 “This was huge. A round win is worth 20 points but truthfully that final round win for us was 40 points,” said Hight, who was also the No. 1 qualifier at the event. “We were 44 back going into the final round and had we lost that’s 64. Winning brought it back to 24 which is a little over a round with two races left. That was a 40-point swing for us. That was big. We needed that one. We would have been pretty bummed leaving here over three rounds back.” 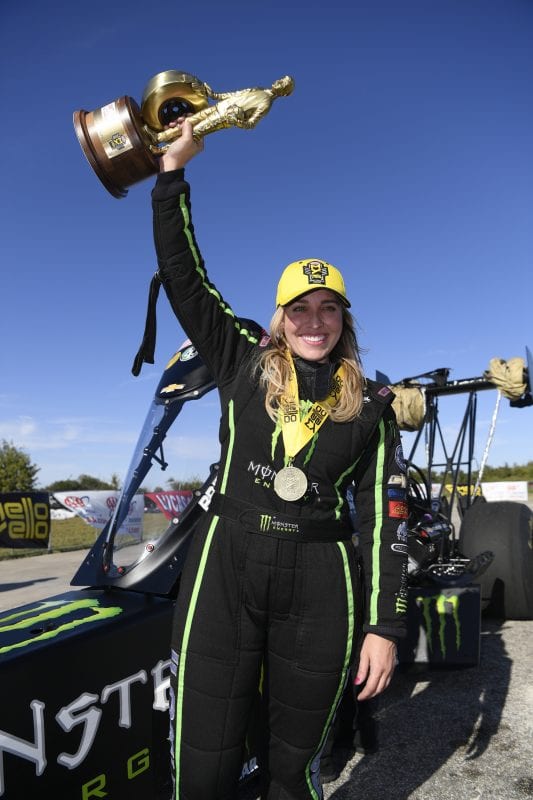 Force piloted her Monster Energy dragster to a Texas Motorplex elapsed-time record of 3.681 at 326.87 to defeat Shawn Langdon and his Global Electronic Technology dragster’s 3.693 pass at 326.56 in the Top Fuel finals. The victory, Brittany’s third of the season and sixth of her career, moves her into second in the points standings.

“It’s been quite a day. A lot needed to happen and it seemed to work in our favor,” Force says. “Really it was about us going rounds. We had Doug Kalitta and Steve Torrence, the two people in front of us in the standings. Everyone has been struggling trying to take them down. They’ve been killing it. When we pulled up there I felt confident in us that we were going to turn those win lights on. That’s what we needed to do, we were able to do it and then we were able to take down Langdon and won the thing. This is a huge win. It’s a Countdown race. And we’re still climbing that ladder.”

Her route to victory included wins against Terry McMillen, Doug Kalitta and points leader Steve Torrence. Torrence, an East Texas native and the No. 1 qualifier, raced Force in a back-up vehicle after his Capco Contractors dragster lost control after crossing the finish line in his quarterfinal win against Richie Crampton. Langdon, who was racing in his first final round since his win at St. Louis in 2016, had round wins against Clay Millican, Terry Haddock and reigning world champion Antron Brown before falling to Force in the final. 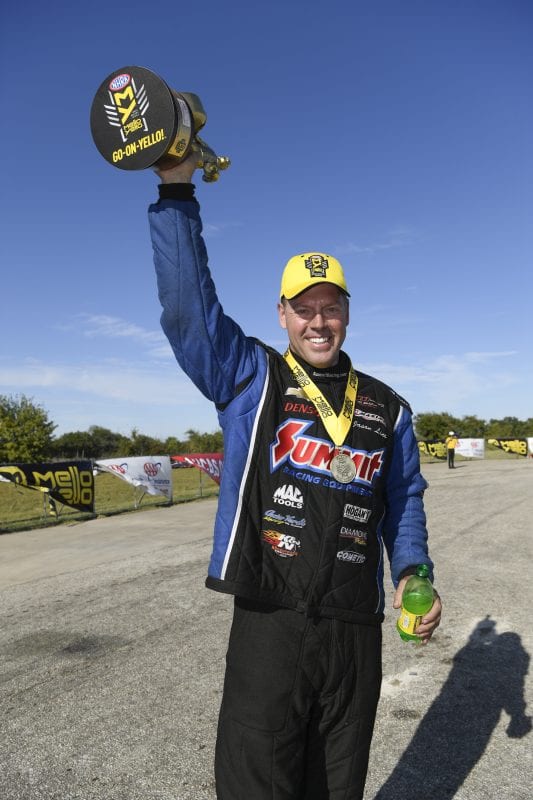 this season and 27th time of his career, after running a 6.548 pass at 211.20 in his Summit Racing Equipment Chevrolet Camaro to take down Drew Skillman who lost on a red-light start.

“The truth is whit the playoff format, now is what matters,” Line said. “We are picking up at the right time. I’m hopefully giving Greg Anderson, Bo Butner and everybody else something to think about for the next couple of weeks. No questions it’s not over. For me it was do or die. If we didn’t win here this weekend the chances of winning the championship were going to be slim to none. Really had to kind of win. And I was lucky enough to win. Really a nice feeling.”

Line raced past Alan Prusiensky, Texas native Alex Laughlin and Brian Self on the way to his third final round of the season. Skillman bested veteran Jeg Coughlin, Bo Butner and points leader Greg Anderson before losing to Line. Anderson maintains the points lead by 15 points over Butner who is trailed by Line.

In Pro Stock Motorcycle, Eddie Krawiec rode his Screamin’ Eagle/Vance & Hines Harley-Davidson to a 9.336 pass at 92.62 which was enough due to a red-light start from defending world champion Jerry Savoie. It is Krawiec’s sixth win of the season, 42nd of his career and second consecutive and third total at Texas Motorplex. 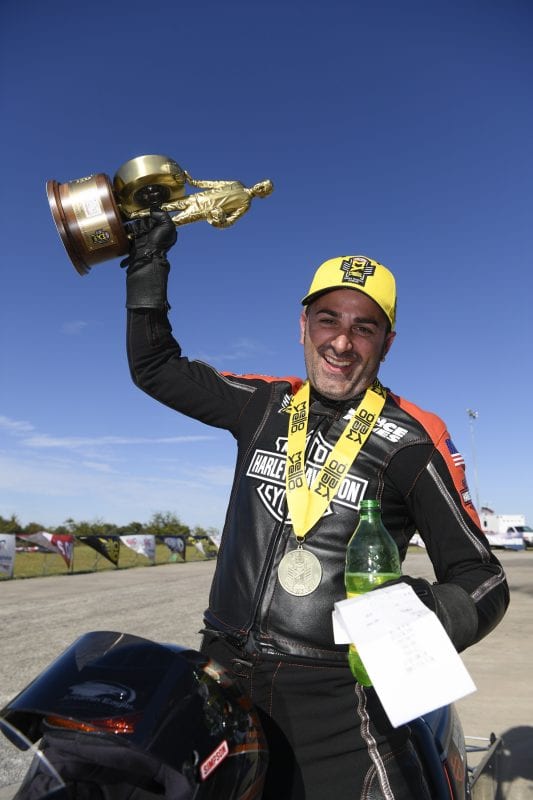 “This track really, leaving here kind of sets the tone for how that championship is going to shape up. I probably put more pressure on myself to do really good here,” Krawiec said. “You need to capitalize. For me, I had, I would say, a perfect weekend for how it worked out. I went out there got a lot of the little points in qualifying. I needed to capitalize, this was the opportunity for me to grab the ball and run with it. I think that was more of my drive for today. Lucky enough for me I had a great motorcycle under me.”