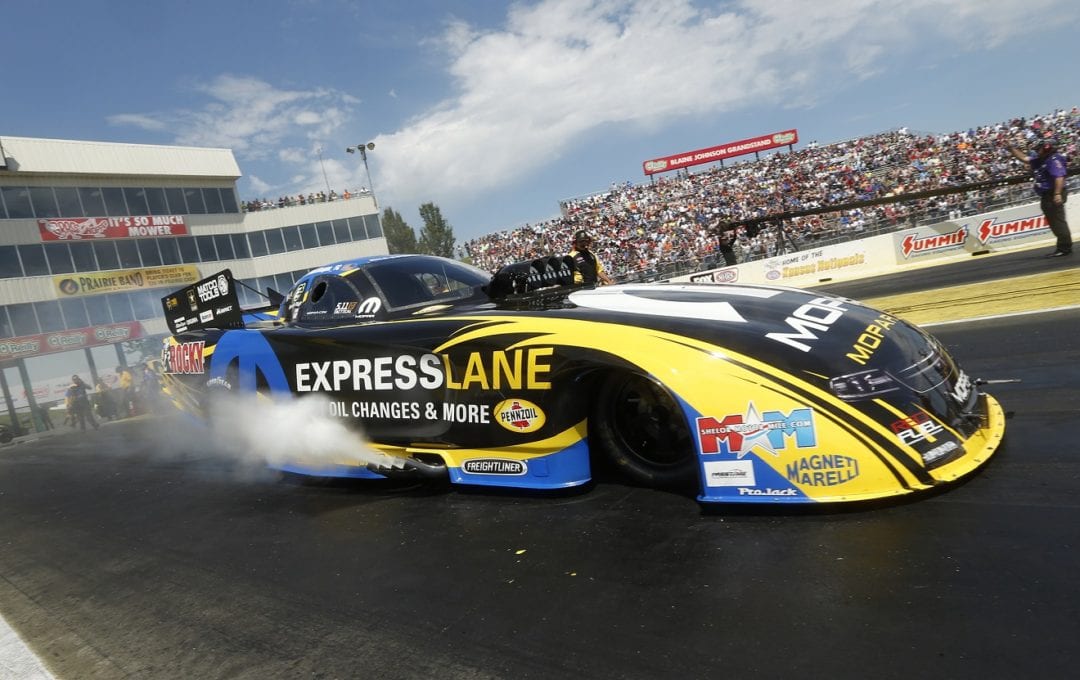 Brittany Force claimed her first No. 1 qualifying position of the season Saturday at the NHRA Kansas Nationals at Heartland Park Topeka, continuing the theme of “the year of the women” in the NHRA Mello Yello Drag Racing Series.

Matt Hagan (Funny Car) and Jason Line (Pro Stock) also will lead their classes into Sunday’s 11 a.m. eliminations as No. 1 qualifiers in their categories at the spacious multipurpose motorsports park in Kansas’ capital city.

No one improved on Force’s national record time of 3.676 seconds from Friday and she is in position to earn her third victory of the season and add a sixth victory by a female driver in the first third of the season. It was her fifth career top qualifying effort and second at Topeka.

“We are very anxious for tomorrow,” Force said. “This track is always a good one for us. We seem to do pretty decent. To put a number on the board like we did yesterday, get the No. 1 qualifier and set the national E.T. record is pretty exciting. We’re pumped up, ready for tomorrow and I am proud of the Monster Energy team.”

“It’s tough when something like that happens,” Force said. “You are ready to go, hit the gas and get the car down the 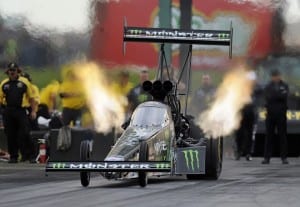 track and they come over and tell you to shut it off. We pulled out there and waited for the Funny Cars to run. Since the conditions improved a little bit, we were trying to push and run a little better, but it shook and didn’t make it down there. We still have three awesome runs [this weekend] and we’ll go from there.”

Hagan earned his first No. 1 of the season and 22nd of his career with his national record performance of 3.862 at 335.57 from Friday in his Mopar/Rocky Boots Dodge Charger. He will face Brian Stewart in the opening round as he goes for his second consecutive win.

“It’s anybody’s ballgame tomorrow,” Hagan said. “These cars are so strong and they are running so good and consistent. You just have to go up there and have your gameplan together and hope that things go your way. Even tonight I didn’t know if that record was going to hold. It got later and later, and the timing issues and different things like that, you never know.

“But it’s cool to be number one. We are very humble about that. We have to be focused on round by round tomorrow.”

Nine-time Topeka winner John Force, who had to go to a back-up car after damaging his primary Peak Camaro in Friday’s night session, rallied to qualify 11th with a 3.962 at 318.84 and he will face defending world champ Del Worsham in the opener.

In Pro Stock, Line took his third No. 1 of the season and 44th of his career with his Friday effort of 6.578 at 210.37 in his Summit Racing Equipment Chevy Camaro. Line, who has advanced to the final at every race this season, will try to keep that streak going and extend his series points lead when he meets Mark Hogan in round one. 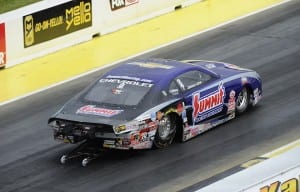 “That’s the first good thing I’ve ever done at Topeka so I feel great about that,” Line said. “We have a great car right now and our Chevy Camaro is bad to the bone. The chances of winning tomorrow is pretty good. It would be a big deal. It’s always nice to do well at a place that’s been a problem for you in the past. If I do a good job tomorrow we are going to have a heck of a good shot at winning. I’ve always liked the track, it just doesn’t like me. I just haven’t done well here, and I couldn’t tell you why.”

Bo Butner qualified second and will race David River in the first round, while Greg Anderson will start third in his Summit Camaro and pair against veteran V. Gaines. Defending world champ Erica Enders, also the defending winner at this event, will meet teammate Drew Skillman.