Four-time NHRA Pro Stock champion Greg Anderson experienced a drastic swing of highs and lows on the second day of qualifying at the NHRA New England Nationals, but the seasoned driver took the day in stride and is eager to return to the starting line in his Summit Racing Chevrolet Camaro for the first round of eliminations at the inaugural event.

Friday’s qualifying sessions amounted to a 6.621-second pass at 211.79 and a 6.591 at 211.63 that positioned the Mooresville, N.C.-based competitor sixth heading into day two. On Saturday, Anderson brought a very strong 6.580 at 211.56 mph to the table and was second quickest of the opening session.

Enthused and eager to return to the driver’s seat for the last session to see what else Team Summit could extract from the brand new racing surface before the fields were set, Anderson had no way of knowing that his day was about to take a dramatic turn. 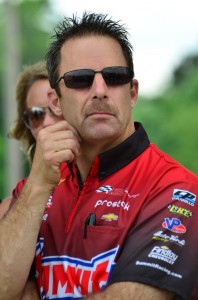 A freak occurrence during the quick turnaround between qualifying sessions on Saturday – a stripped spark plug hole – set the team off schedule, and Anderson was forced to sit out the fourth and final session of qualifying. The extremely rare situation left Anderson disappointed, but also grateful.

“We just ran out of time to get it fixed,” said Anderson. “You hate to miss a run like that, but it was just a freak deal, and you have to be thankful that it didn’t happen on raceday. We’ve got it fixed now, and this Summit Racing Camaro will be good for tomorrow.”

The high point for Anderson was the 6.58 in the third qualifying session, and running towards the top of the pack is a very comfortable and familiar position that has been just out of reach in recent times.

“That was very encouraging, and I think we can do even better,” said Anderson, who retained the No. 6 position and will meet up with Steve Kent in the first round of eliminations on Sunday. “We’re not going to try to get crazy, but we’re going to try to stay consistent. We’ll just chisel at it a little bit, and I think we’ll have a chance tomorrow.

“This is a neat racetrack, and so far I’m loving it here. The fans are great, they’re really into it, and that makes it a very exciting place to race. It’s a challenge, and we definitely like a challenge. I’m having fun with it, and hopefully what happened today was our bit of bad luck for the weekend. Tomorrow, we’re planning for a smooth raceday with a chance to win.”