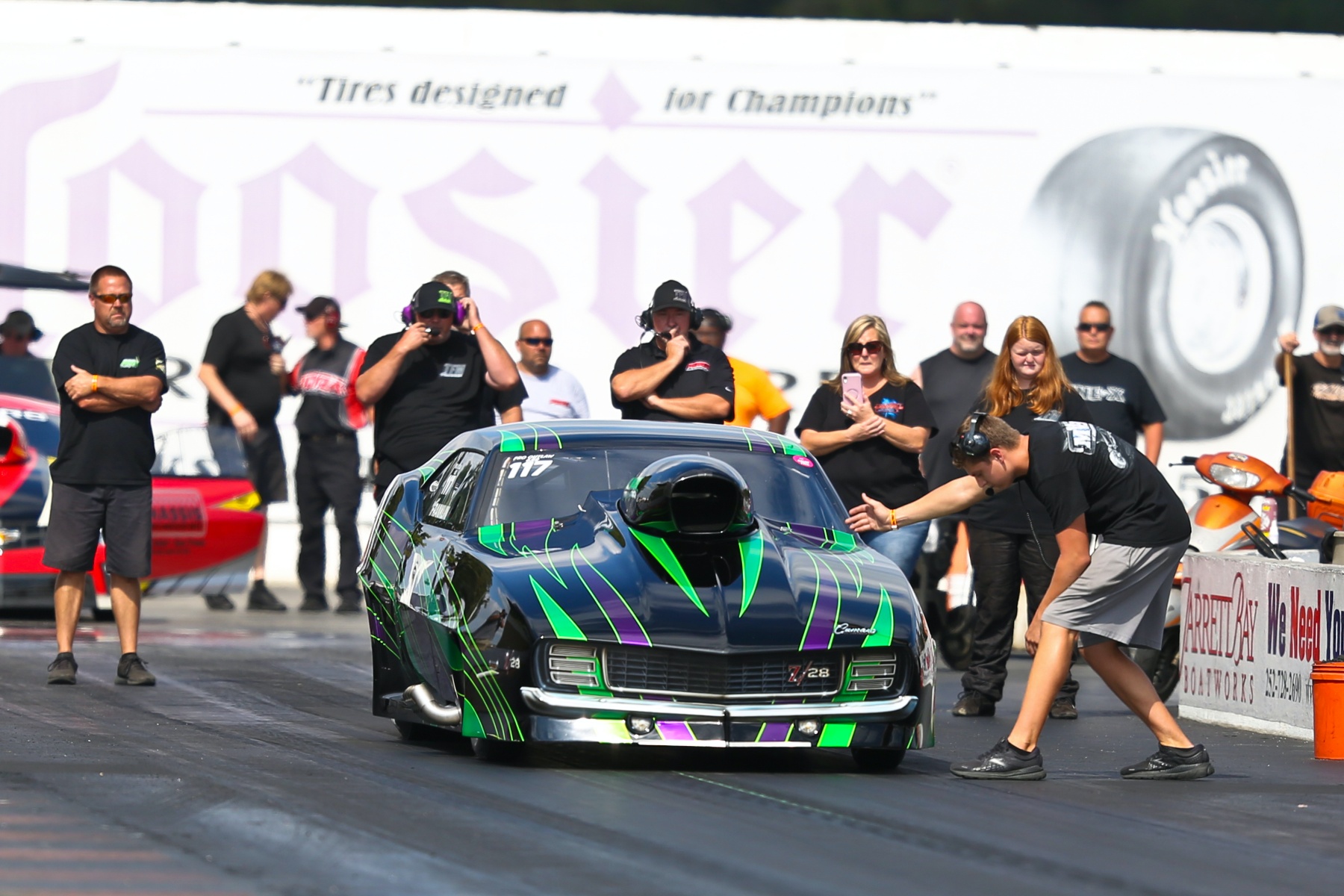 For months now, Amber Franklin has been patiently waiting to make her debut in the PDRA’s $hameless Racing Pro Outlaw 632 class. Parts delays prevented the 2017 Pro Jr. Dragster world champion from bringing out the “Jungle Rat” ’69 Camaro her father, Tommy Franklin, drove to the 2016 and 2017 Pro Nitrous world championships.

This weekend at the PDRA Proline Racing DragWars presented by Modern Racing, Franklin finally got her chance to make her “big car” door car debut. After testing the car – now sporting a Pat Musi-built 632ci engine – during prerace testing at the Shakedown Nationals in September, Franklin made her competition debut during Friday qualifying at GALOT Motorsports Park.

“It’s awesome. I couldn’t ask for anything more,” Amber said. “I was not expecting any of this. We were just coming out wanting to make A-to-B passes and get the car figured out. I can’t thank my parents enough and everyone that made this happen: Robert Hayes, Jerry Bickel, Pat Musi, Mark Micke, and everyone else that helped us get here. The car has been great. It makes it a lot easier on me to drive.” 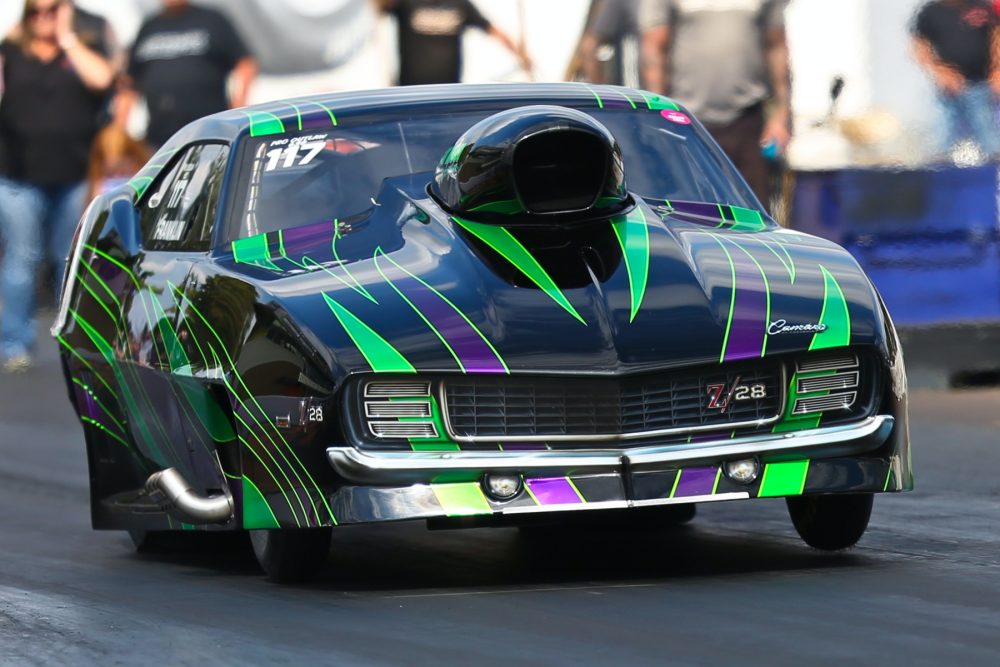 The elder Franklin has watched proudly over the years as Amber excelled in Jr. Dragsters, then stepped up and had success in Top Dragster and bracket races at the family’s track, Virginia Motorsports Park. It’s been rewarding for him to see Amber transition to the door car so smoothly.

“Definitely a proud dad moment,” said Tommy, who qualified No. 2 in Pro Nitrous. “They come out here and stand behind the cars and watch all the time, and I guess they just soak it up. She got in it and she’s been flawless. She’s done her part 100 percent. The car has just been great. Pat Musi built the motor for it. It’s our first time doing that combination. We’re shooting a little in the dark and seeing what we’ve got, but we’re happy with it. She’s done great and definitely exceeded our expectations.”

The Pro Outlaw 632 debut is the result of a plan that was set in motion shortly after Tommy won the 2017 Pro Nitrous title. He had a brand-new, nearly identical “Jungle Rat” ’69 Camaro on order from Jerry Bickel, and rather than selling the car that carried him to back-to-back championships, he kept the car for Amber’s move up to a big car, whenever that came.

In a late 2017 interview, Tommy said, “I’m going to keep my old car for now for two reasons: it’s too good to race against, but also because there’s no sense in selling that car and buying another car for Amber. We don’t know exactly what the process will look like. She has a big interest in the Outlaw 632 class right now, which I think is a really cool class.”

It’s all worked out pretty well. The car has performed just as well as it did when Tommy was driving it in Pro Nitrous, even though it’s undergone changes not limited to the engine and the driver.

“It’s been such a good car for us,” Tommy said. “I miss that thing like crazy. It’s such a good piece. Just to stand back behind it and watch it, it’s like my gosh, that thing just makes such pretty runs out there. But it takes a lot of people. We’ve got a great crew here: our whole crew, and Jeff Pierce helped us a lot to get us headed in the right direction with this thing. These things aren’t easy. A lot of great people have helped us get to where we could come out and do good today.”

Along with having fun watching Amber make the transition, Tommy has enjoyed the new challenge of tuning a different combination in a different class.

“This is a tough class and it’s fun,” Tommy said. “I’m all over this thing trying to see what I can do to pick it up. It’s got my brain spinning all the time. It’s probably not a good thing, but it’s great.” 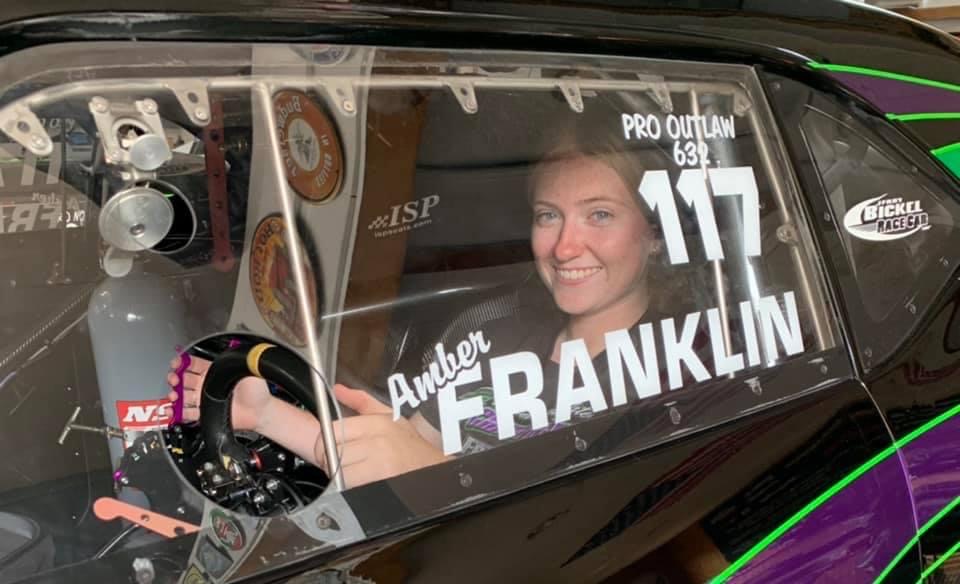 On the driving side, Amber has proven she has what it takes to compete in the PDRA’s growing Pro Outlaw 632 class. She admits she’s still learning the car, but judging by her reaction times in Thursday testing and Friday qualifying, she’s going to be a real contender in Saturday eliminations.

Going into eliminations, Amber’s goal is to build on the qualifying success and turn on some win lights.

“At first, our goals were very small. But now I feel like that’s quickly changed,” Amber said with a laugh. “I definitely want to do my job as a driver and make sure I back this team because they’ve given me – I think – the best car out there. We definitely have the potential to be the fastest. I think if I do my job we can definitely go some rounds. That’s the goal.”

Amber and Tommy aren’t the only Franklins racing this weekend. Amber’s younger sister, Ashley, is racing in Pro Jr. Dragster, where she also cut a .000 light in the first qualifying session and qualified No. 4.