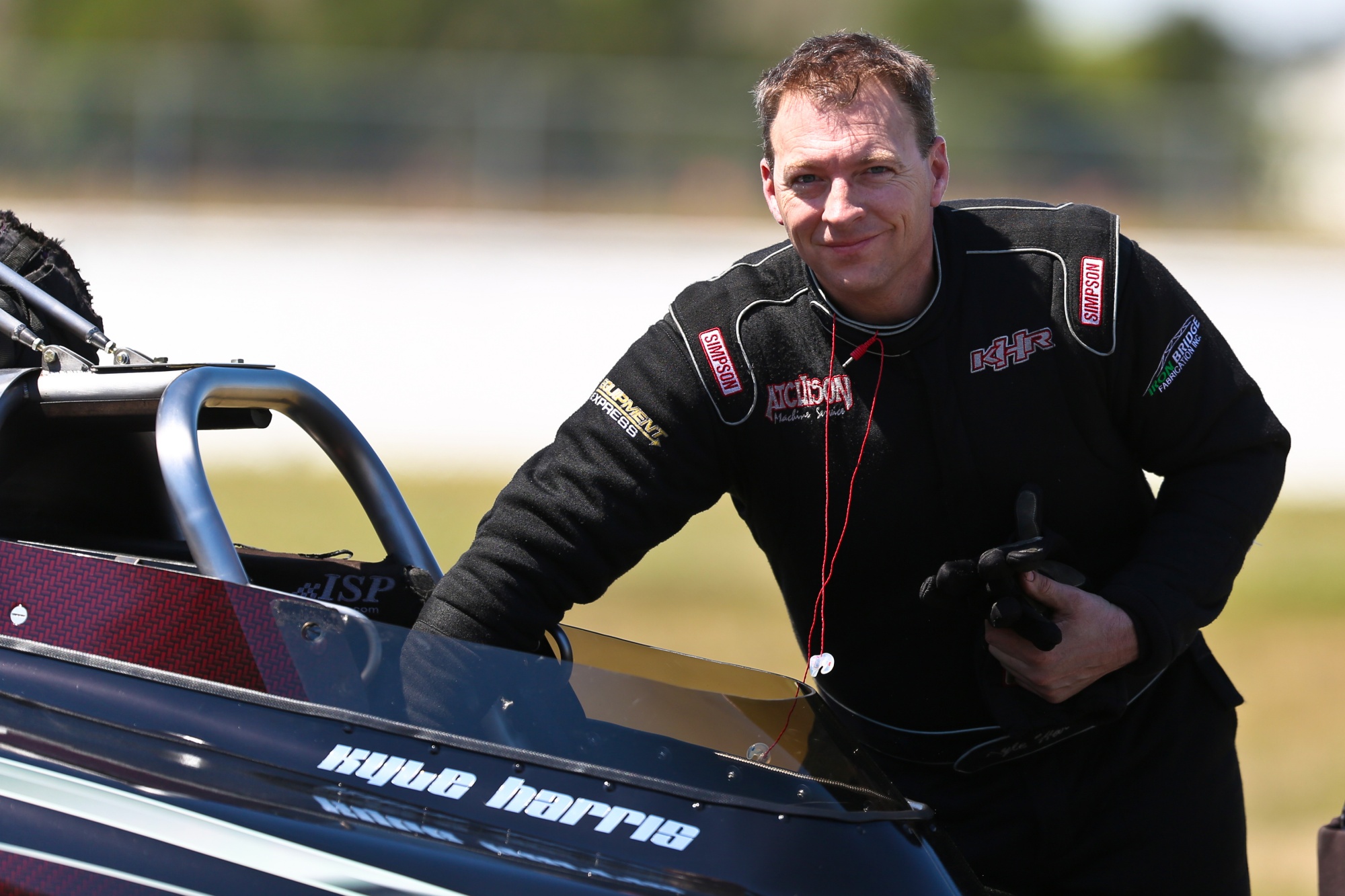 Kyle Harris knows his Charles Jones Industrial Limited ’32 Bantam Altered isn’t exactly what everyone imagines when they think of a traditional Top Dragster. With its short 125-inch wheelbase and roots-blown, methanol-burning engine, it isn’t always the most consistent combination available. But the Canadian drag racing veteran had his mind set on making the setup work, and after a third-place points finish in his first full season in Lucas Oil Elite Top Dragster competition last year, it’s safe to say Harris is accomplishing what he set out to do.

“At the first race, everybody probably thought we were crazy for trying to run an Altered in Top Dragster because these cars are normally pretty volatile,” says Harris, who made his PDRA debut at the inaugural World Finals at Virginia in 2014 before returning for a full season in 2018. “When we were down there for the first time trying it out, I was all over the racetrack trying to get the car set up. The track was just so stuck and I had to get it right. When I got it right, that’s when we started to be competitive and I think we gained a little bit of respect from the teams we were racing against and they opened up to us.” 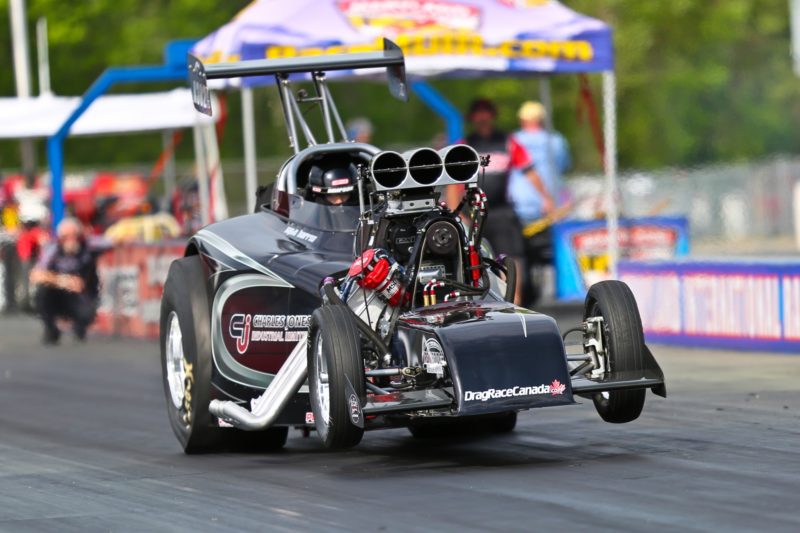 Harris’ Altered started life as an alcohol Funny Car campaigned by three-time IHRA world champion Rob Atchison. Harris was a crew member with Atchison from 2001 through 2008, so he was familiar with the chassis when he bought it from Atchison and had Richard Hartman at Horton Race Cars convert it into its current form. An Atchison Racing Engines-built AJPE 481X engine with a 14-71 blower sits between the frame rails, closely resembling the combination that powered the ride when a Funny Car body covered it.

“The Altered always interested me,” Harris says, “and I just thought, if given enough time and resources, I could probably put something together that looks pretty cool and is fun for me to drive – which it is. It’s definitely a handful.”

Last season, Harris drove his Altered to semifinal finishes at the season-opening East Coast Spring Nationals and the late-season Drag Wars, both at GALOT Motorsports Park, placing him solidly in championship contention going into the Brian Olson Memorial World Finals at Virginia. There, he posted a runner-up finish and ended the season in third place, just six points behind Nick Hamilton and just over four rounds behind world champion Chaz Silance.

A third-place finish was a strong foundation for another championship chase this season, but the memories that left the biggest impressions on Harris were made in the pits, not on the track. “It was super validating to finish in the top 3,” Harris says, “but we were just happy to come down and be a part of the series. What we didn’t expect was the friendships we made with a lot of the racers in Top Dragster, Top Sportsman, even in Pro Boost. Everybody was so welcoming to us. We just felt like part of the group.”

Harris was attracted to the PDRA series for several reasons. For one, the fast bracket racing in Elite Top Dragster was a perfect fit for his car. But perhaps more importantly, the all-eighth-mile series is known as a family-oriented organization, which really appealed to Harris and his wife, Jennie. Harris’ team is a family operation, as his daughter, Cristina, graduated from Jr. Dragsters to the family’s Top Alcohol Dragster a couple years ago, and his son, Ryan, currently competes in Gilbert Motorsports Top Jr. Dragster. Kyle’s brother, Cody, goes to the races as well, joining crew members Mike Azzopardi, Jordan Hardie and Jeff Lilley.

“My wife doesn’t like to travel, but when she gets to the racetrack she loves meeting all the people and she’s made a lot of friends there too,” Harris says. “Mike Azzopardi is actually one of our sponsors. He owns Mountain Tire and races with us on the team. He’s super-pumped to go to the PDRA races. The people who race with us have been racing with us a long time, they’re dedicated, and I think it’s important for me to acknowledge what they do for us.”

Ryan is becoming a consistent racer just like his father too, as he earned a semifinal finish at the Fall Nationals in Darlington, South Carolina, last October. He raced his way into the final round at the Mid-Atlantic Showdown presented by Modern Racing at Virginia in May this season. Ryan will square off with Nathan Tanner for the win at the North-South Shootout presented by Line X, May 30-June 1.

“My son, Ryan, he’s just having a blast,” Harris says. “He’s very sociable and he loves to meet new people. It seems like all the kids and parents know him. Just the social aspect of it for him has been excellent. He, too, has been trying to sharpen up his lights and his driving abilities – and he’s 11 years old. I’m tremendously proud of him for what he does. He’s his own crew chief. I help him with the mechanical part of the car, but he has to do the rest of the work. He keeps it clean, he’s gotta service the car after every run, he helps me download all the information and read the weather and set up the whole program, and he loves every part of it.” 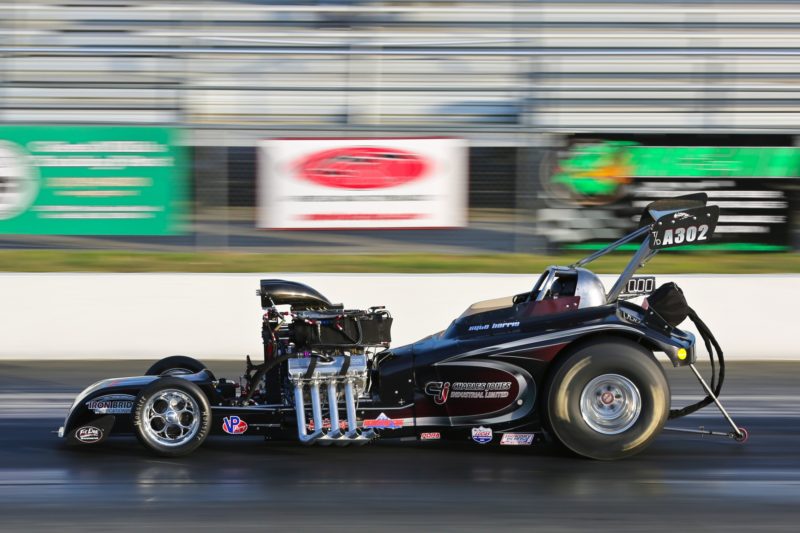 Despite the 12-17-hour trips between the PDRA races and Harris’ home in Burford, Ontario, Canada, the heavy equipment transportation project manager intends on running nearly the entire eight-race 2019 PDRA schedule. Prior commitments, including a 4,000-mile roundtrip trek to Edmonton, Alberta, Canada, for a display and race for sponsor Charles Jones Industrial Limited, caused Harris to miss two races last season.

“I feel like if we would’ve hit them all, things might’ve been different at the end of the year and we would’ve been that much closer to winning the championship,” Harris believes. “This year we’re trying to hit them all. Valdosta (for the Summer Nationals presented by Lithium Pros, June 27-29) will be tough for us, but we’re doing what we can to make it there.”

Harris and his family could easily stay north of the border and race at their local tracks – and they do on occasion – but the challenge of racing fast, consistent dragsters and competing for a world championship is just too attractive of an opportunity to turn down.

“The logistics are a little bit tough for us and it definitely adds to the cost of racing for us,” Harris admits. “We just really liked how the PDRA was promoting this super-fast ‘elite’ bracket racing that we just felt wasn’t available to us up here in Canada. We have a good contingent of race cars up here and it’s very competitive – Canadians are just as competitive as our American counterparts – but the car counts are definitely higher in the U.S., so the competition is a little bit broader. We were looking for some fast bracket cars that we could run with and we found it with the PDRA.”

This story originally appeared in DI #145, the Sportsman Issue, in June of 2019.