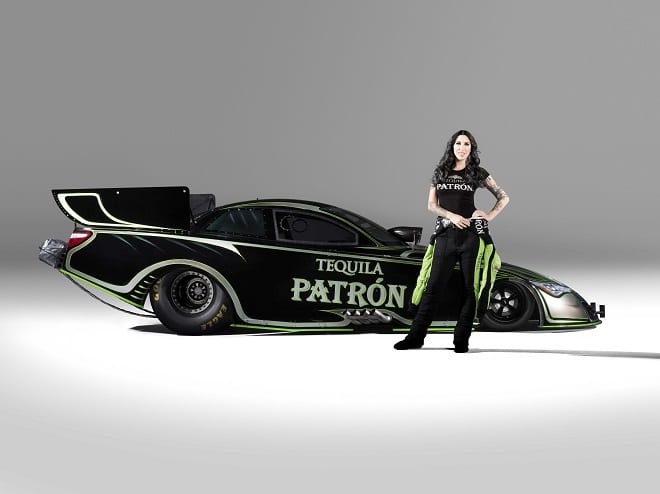 Alexis DeJoria Racing is going back to its roots for the 2016 NHRA Mello Yello Drag Racing season. Operating out of the Kalitta Motorsports camp, The Patrón Spirits Company-backed Toyota Camry Funny Car team will once again sport the iconic ‘Patrón green,’ as they return to the distiller’s signature Patrón Silver label in 2016.

the NHRA world by showing up to the 2014 season-opener in Pomona, California in purple and gold. The team represented the Patrón XO Cafe liqueur brand throughout the 2014 season until the final race of the year when they surprised fans yet again with a red, orange and yellow car emblazoned with Patrón’s latest incarnation, Patrón XO Cafe Incendio. While the Incendio brand was originally intended to be a one-race-only look, fan response was so positive that the new colors remained for the 2015 season.

As the Patrón team enters its fifth year of Funny Car racing, they will return to the quintessential green Patrón Silver scheme.

“Alexis and the entire Patrón team were tremendous partners in helping us launch and generate excitement and awareness for the new Patrón XO Cafe Incendio. However, in 2016, we decided to return to the classic Tequila Patrón livery on Alexis’ Toyota Camry Funny Car for the 2016 season. Additionally, this more closely aligns Alexis DeJoria Racing with our global motorsports marketing platform, including our Tequila Patrón ESM Team, racing in the World Endurance Championship series,” said Lee Applbaum, Chief Marketing Officer at Patrón Spirits. “Though it can sometimes be difficult to see clearly at 300-mph, we couldn’t be more proud to fly our colors, and our iconic Patrón Silver bottle, on Alexis’ incredible 10,000-horsepower race car.”

“We started our first season in Funny Car branded with Patrón Silver. I love the way the green and silver looks on the car, it’s incredibly sharp,” said DeJoria. “It makes sense to represent the company’s flagship spirit on our Toyota Camry. I think the fans will like it too- it’s very recognizable. Everybody knows that label. When you think of Patrón, you automatically think of the Patrón Silver bottle. Over the years, we’ve had a lot of fun with the other Patrón brands on our car, but I’m really happy to get back to our roots for year five.”

Alexis DeJoria and the Tequila Patrón Toyota Camry Funny Car team take to the track on Friday, February 12th in Pomona, California for the first qualifying round of the NHRA season at the 56th annual Circle K NHRA WinterNationals. Fans can get a sneak preview of Team Patrón’s updated look at the NHRA Nitro Spring Training test session in Phoenix, Arizona, February 3-6.