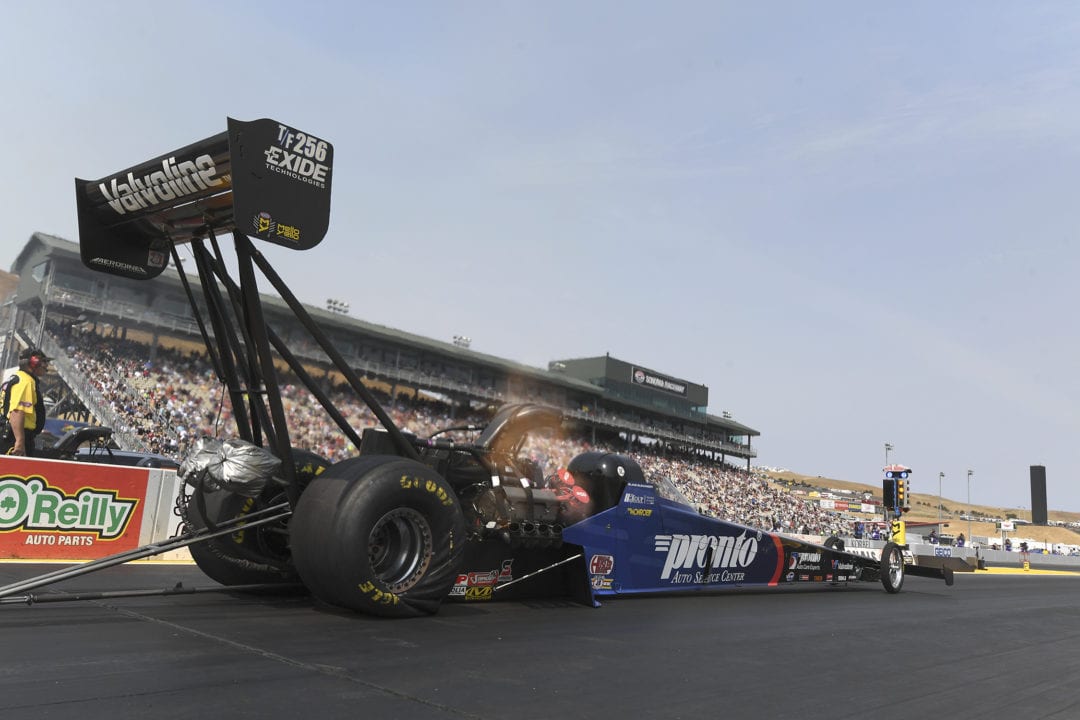 Alexander powered to the winner’s circle with a run of 4.004-seconds at 287.41 mph in his Pronto Auto Service Center dragster to take down the winningest driver in Top Fuel history, Tony Schumacher, in the finals. Despite having competed at only six events on the season, Alexander now has three final round appearances as he is now one of four Top Fuel competitors with multiple wins on the year. 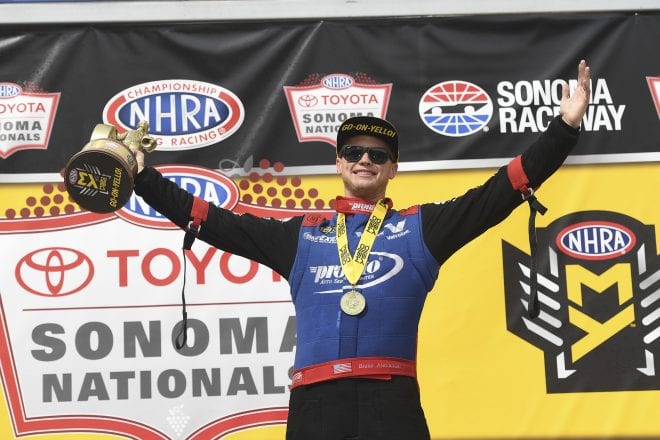 “We may be a part-time team but we come out to the track trying to win every race, and so far this year we have had a lot of success with that,” Alexander said. “My life has changed this year with how well we have been running, and the opportunity that Bob [Vandergriff] has given me to drive his racecar has been paramount in my career to take me to higher levels.”

Alexander took down Mike Salinas, three-time world champion Antron Brown and Scott Palmer as he continues to make a bid to qualify for the Countdown to the Championship.

Schumacher’s third runner-up finish of the season helped vault him into second in the points standings as he continues to close the gap on points leader Steve Torrence.

Schumacher was also one of four Top Fuel competitors to join Torrence by clinching a position in the Countdown to the Championship playoffs, as he, Clay Millican, Doug Kalitta and Leah Pritchett fill out the first half of the 10 available Top Fuel spots in NHRA’s six-race postseason championship clash.

The defending Funny Car world champion Hight used a 3.984 at 319.75 in his Auto Club of Southern California Chevrolet Camaro SS to beat Ron Capps in the finals. He secured his second win of the season and the second of his career in Sonoma. 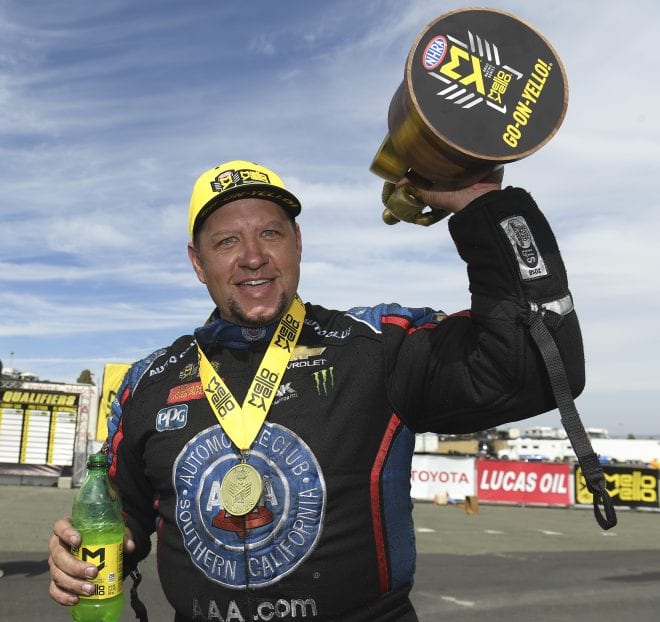 “This track is unbelievable, and we were fortunate to have three great days of racing because of these conditions this weekend,” Hight said. “This is the time of year you have to get it together if you want to win a championship, and we know we need to keep clicking before we start off the Countdown to the Championship.”

Hight qualified 11th and was able to defeat Tim Wilkerson, Bob Tasca III and Tommy Johnson Jr. on his path to victory as he locked in his position in the Countdown playoffs.

Capps now has two runner-ups in his three final rounds on the year, as he and teammate Matt Hagan each joined Courtney Force by locking in their spot in the 2018 Countdown.

Coughlin Jr. drove to a 6.532 at 212.16 in his JEGS.com/Elite Performance Chevrolet Camaro to defeat Deric Kramer in the final round as he became the second driver in the Pro Stock class with three victories on the year. The five-time world champion secured his third career win in Sonoma and first since 2010.

“We’ve weathered a few storms over the past few seasons, but this team is a lot of fun and the fact that we are a threat to win every weekend is a real testament to how far this team has come,” Coughlin Jr. said. “We never once felt like we had to back-off because of these conditions, and seeing four win lights turn on at this track is an amazing feeling.”

Despite falling in the semifinals, Anderson became the first driver in the Pro Stock class to clinch a spot in the Countdown.

Tonglet brought home the win in the Pro Stock Motorcycle class after a 6.771 at 198.52 on his Nitro Fish Racing Suzuki to take down points leader Andrew Hines in the final round. The 2010 world champion notched his third consecutive victory at Sonoma Raceway as he now has two wins on the season.

“We got lucky in the first round because I had a terrible light, but once we got that round win we just kept rolling and turning on win lights,” Tonglet said. “We came off the trailer going fast this weekend and that kept going with each round, so that made today a great day.”

Hines now has four runner-up finishes on the season as the current points leader will look for his first win in 2018 when Pro Stock Motorcycle returns to the circuit in Brainerd.

Five competitors in Pro Stock Motorcycle have now clinched a spot in the Coutndown, as Hines, Krawiec, Tonglet, Hector Arana Jr. and Jerry Savoie have locked-in their postseason berths.