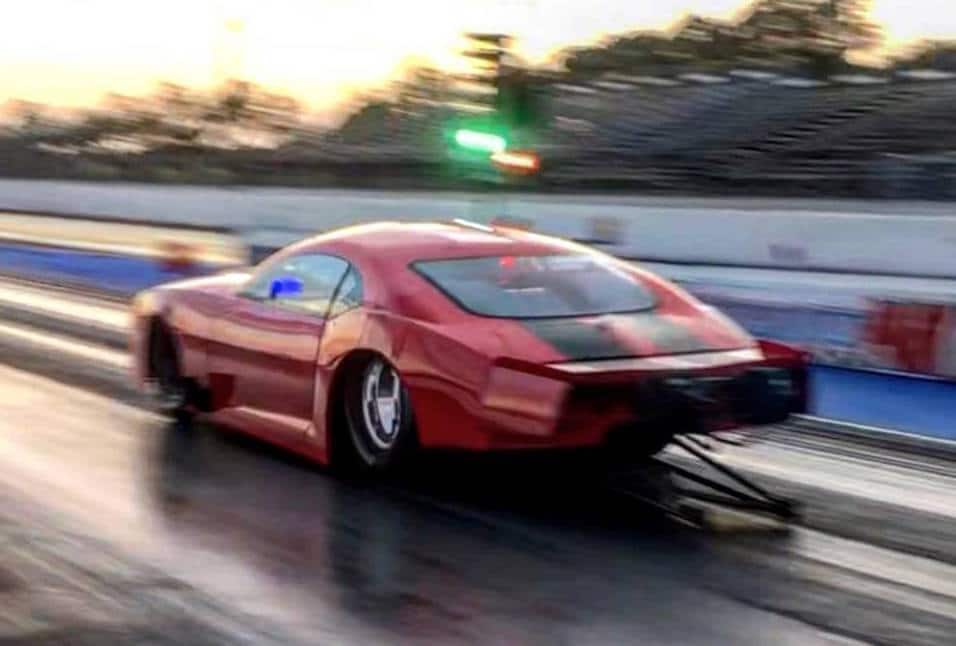 Stepping into a turbocharged Pro Mod Camaro for the first time, Alex Laughlin had his own way of rating the initial experience.

Forget anything technical. Laughlin instead decided to go with the pucker factor, an appropriate rating system when it comes to a hell on wheels Pro Mod.

“I can’t compare it to anything except something in my imagination, like the space shuttle,” Laughlin said. “It’s unreal. I’m telling you, the pucker factor is a level 10.”

Now at the completion of his third day of testing the Camaro at Bradenton Motorsports Park with the rest of the Elite Motorsports team, the pucker level has lessened for Laughlin, but the thrill is just getting started.

From just the initial burnouts to the first quarter-mile pass at 5.90 and 250 mph, Laughlin is learning that driving a Pro Mod is unlike anything he’s experienced in his racing career and Laughlin has dabbled in a lot.

The Pro Stock driver, who plans to race a full NHRA Pro Stock and Pro Mod schedule with Elite Motorsports in 2019, has piloted everything from lightning-quick go-karts to an A/Fuel dragster to a blown drag radial Corvette, which he raced for the first time last year.

That experience was close to hellacious as the Pro Mod, but the extra 1/8-mile made a considerable difference.

“I’ve driven an A-Fuel dragster and been 280 (mph) and it’s not even in the same ballpark,” said Laughlin, who has two NHRA Pro Stock wins. “I’m between two actual car doors now and it’s chugging along and, I tell you what, my eyes have to be the size of silver dollars by the end of the race track.”

It’s been a Pro Mod baptism by fire for Laughlin, who admitted he was more of a blower guy and wasn’t exactly a turbo fan. In the course of a couple days, that opinion quickly changed.

“Let me tell you how wrong I was,” Laughlin said.

It’s a massive step for Laughlin, much like Elite teammate and two-time Pro Stock world champ Erica Enders experienced a year ago when she made her NHRA Pro Mod debut.

But being the talented driver she is, Enders made considerable strides throughout the year and Laughlin expects to do the same.

Even from the initial burnout earlier this week to Thursday’s final 250 mph run, Laughlin has been pleased with the progress. The shock value of a turbocharged monster is still there, but it’s not quite as daunting as it was just a few days ago.

He’s gone from “just hanging on and cannot wait to dump the laundry on this thing” to an unreal experience.

Of course, it’s all made Laughlin crave the adrenaline rush the car provides even more.

“I absolutely can’t wait (to start the season),” Laughlin said. “Every pass that I make in this thing, I’m able to slow it down a little bit and process it a little bit. It’s getting easier with every pass, but in the beginning it’s a whole lot. You’ve got the adrenaline, the noises, and you feel the tail of the car wagging the whole way down and you have to drive it.”

It’s a total reversal from what he would do in his Pro Stock Camaro. With the way that car is set up, any slight waggle means letting off the gas and quickly ending the run. In a Pro Mod, that’s simply when the fun starts.

“This is something it does and it’s perfectly fine,” Laughlin said. “You just hang on, steer it in the right direction and keep rolling.”

Laughlin will keep rolling into an ambitious 2019 season that already includes more than 30 weekends of racing when you factor in his NHRA schedule, an appearance at the third annual World Series of Pro Mod and a few appearances in his radial car at Donald Long’s big three events.

But there’s a definite excitement for racing in Pro Mod this year and that extends through the entire Elite Motorsports camp. They’re bringing their Pro Stock knowledge, expertise and technology into the Pro Mod class, which will make for an interesting dynamic on a number of fronts.

They will have three cars racing full-time in Pro Mod with Laughlin, Enders and class veteran Steve Matusek, and Laughlin has high expectations heading into the season debut at Gainesville in March.

“The excitement is one thing for sure, the competition is another as well,” Laughlin said. “You’re talking about a huge number of cars trying to fit into a 16-car field and the difference in ETs aren’t that much more drastic than what we’re seeing in Pro Stock. It’s an interesting time to be getting involved in Pro Mod because it’s so strong right now. But you want to come in and run well and be competitive and win, so we’re going to do whatever it takes to do just that.”