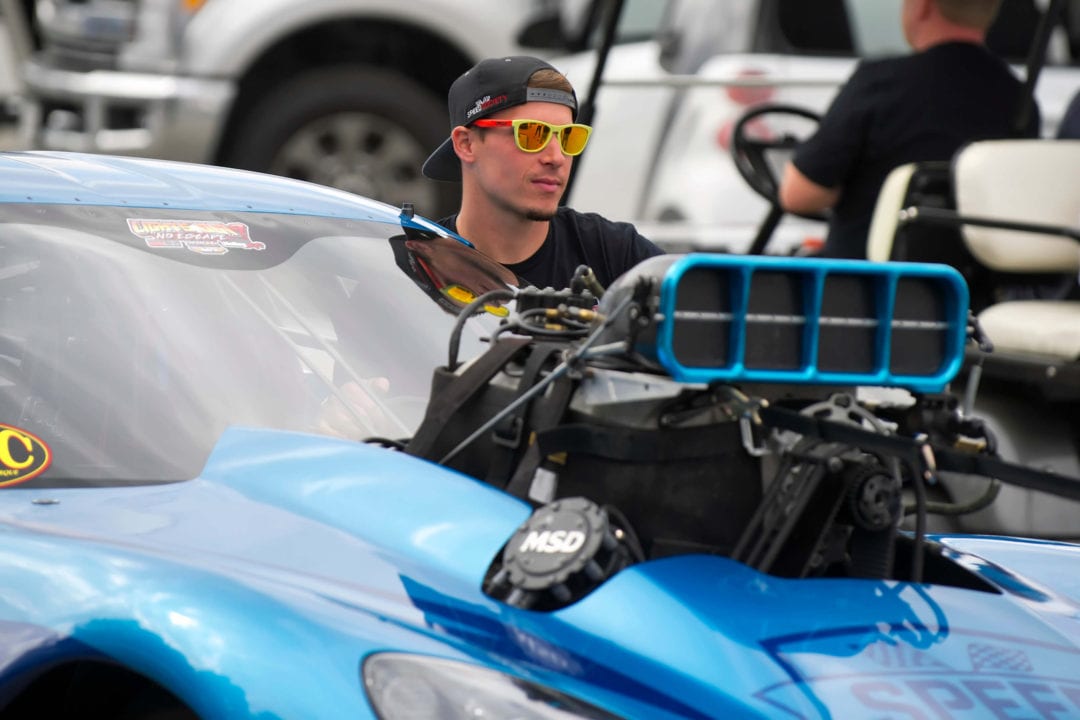 A new challenge has always been appealing for Alex Laughlin.

It’s already taken him to new places like Top Alcohol Dragster, a drag radial car at the biggest radial events in the country and a spot on the popular “Street Outlaws” television show.

Now, that thrill ride curiosity is sending Laughlin to the biggest and richest Pro Mod race in the history of the known universe.

Laughlin, a standout in the NHRA Pro Stock ranks, officially accepted his invitation to the DRAG ILLUSTRATED World Series of Pro Mod, which takes place Aug. 10-11 at Bandimere Speedway. Final details of what he will be driving on “Thunder Mountain” are still being worked out, but, for the time being, that’s beside the point. Laughlin will be in Denver in August in a Pro Mod car with a chance to win $100,000, and that’s more than good enough for him.

“I’m so grateful for the opportunity,” Laughlin said. “It was something I wanted to be a part of, even last year. It is an absolute dream come true, to be honest. Just the whole deal with Wes [Buck] coming to the pits, presenting my dad and I with an invitation – it’s just over the top. It might be the coolest thing that has ever happened to me.

“We’re working out some details on the car that I’ll be driving, but I’ll be there no matter what.”

That need for speed will be quenched in a major way at Bandimere Speedway, as Laughlin makes his Pro Mod debut alongside some of the biggest names in the sport.

That’s a daunting task, but Laughlin isn’t concerned with that. Standing pat has never been his way, whether it was working hard to find sponsors to race full-time in Pro Stock, jump into the radial world and make his debut at Lights Out 9 or anything else he’s accomplished along the way.

Laughlin simply wants to race, do it on a high level and do it as fast as possible. It’s an approach that meshes perfectly with Pro Mod racing in general and especially the WSOPM.

Add in the matter of racing at a high altitude – something Laughlin does during the NHRA Pro Stock race at Bandimere – a winner-take-all prize of $100,000 and the scoreboards being off during all shakedown runs, and Laughlin was hooked.

“I think that’s so cool,” Laughlin said. “You can watch a car go down the track, but you can’t tell if it ran a 5.50 or a 6.00. All you know is it went straight, it was loud and you heard the tires squealing. It’s going to be really interesting. I’ve never done anything like that where I don’t know what my competitor’s lights or ETs are. When I’m racing in Pro Stock, I’ll get the sheet out that has everybody’s information on it. I’m pouring over those details, trying to learn as much as I can about the competition – just know what I’m up against. Throwing all that out the window with the World Series of Pro Mod, it’s pure badassery.”

It’s the perfect summation of a race that made a thrilling debut in 2017 and has only continued to gather steam heading into the WSOPM’s second year. That rapid ascent of interest in the race also serves as a reminder for Pro Mod’s recent explosion in popularity with both fans and racers alike.

Laughlin has seen it on a large scale in the NHRA Pro Mod ranks, and the draw for him with the class is that it mixes the best of both worlds from his Top Alcohol Dragster and Pro Stock experiences.

“I like the speed of the (dragster), but I just really like driving a door car,” Laughlin said. “You put those two together and you’ve got a Pro Mod. I think that’s the baddest class in drag racing.

“Pro Mod is the coolest thing out there, and one of the things that’s so cool to me is watching up on the starting line at an NHRA event, there’s Top Fuel drivers, there’s Funny Car drivers, there’s the Pro Stock guys. Everybody wants to watch Pro Mod. If you think for a second none of the pro know the names of the Pro Mod drivers, you’re completely wrong.”

Laughlin, who has two career Pro Stock wins and three final round appearances, knows many of those names will be his competition in Denver for the WSOPM. That possibility has Laughlin even more excited to compete on “Thunder Mountain,” using it as a thrilling first step to immersing himself into the Pro Mod world.

“I think it’s bigger than it’s ever been and it’s not done growing and getting bigger,” Laughlin said of the Pro Mod class. “Pro Mod is where it’s at and the World Series of Pro Mod is the biggest race there is for these cars and drivers – there’s no way I’d miss it.”

For more information, or to purchase tickets visit www.worldseriesofpromod.com.