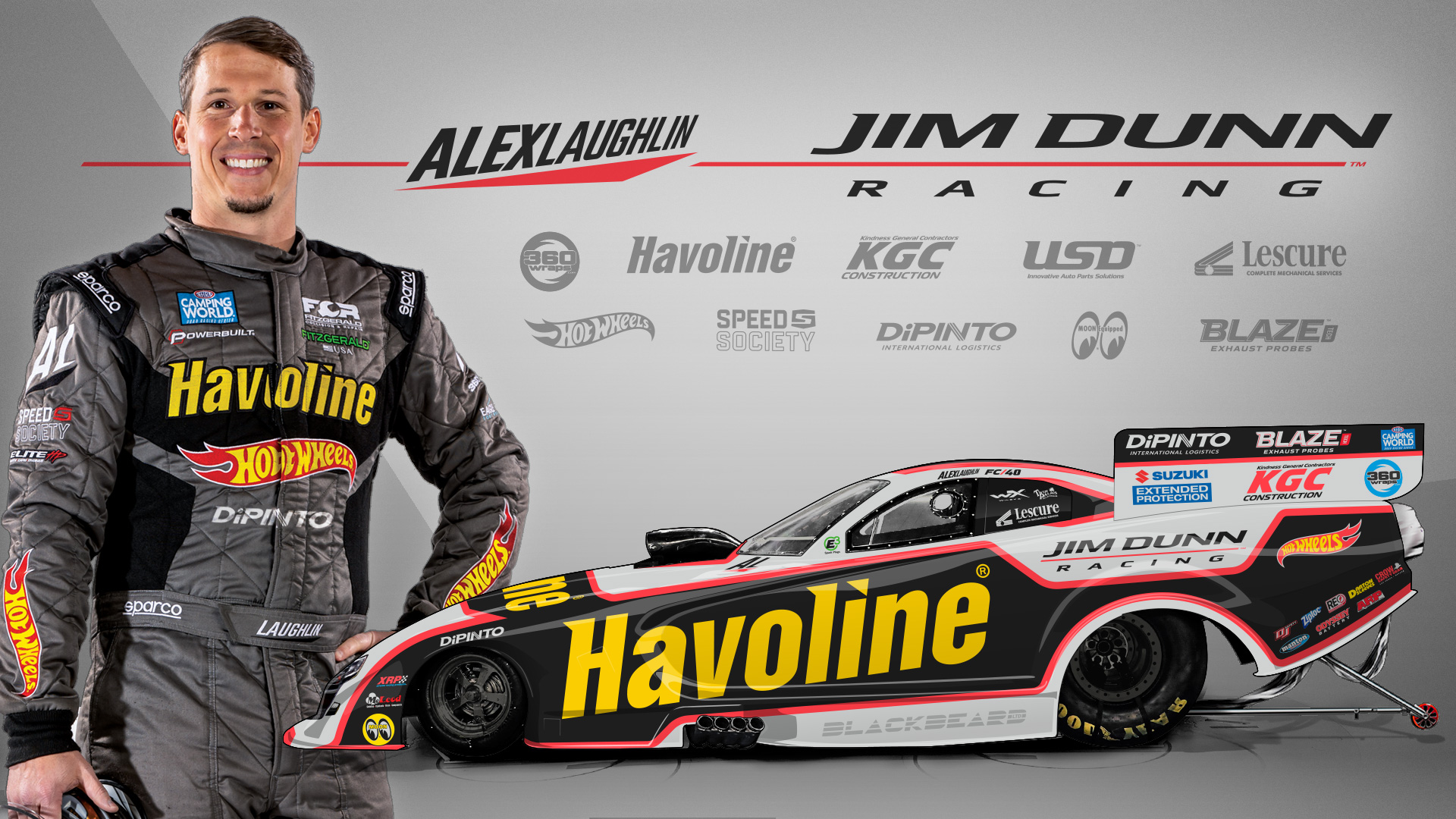 Alex Laughlin is not new to the NHRA or winning big events but he is new to Jim Dunn Racing as the team’s Funny Car driver in 2023. Laughlin, who has succeeded at every level he has competed at in drag racing, will bring a wealth of talent and young energy to the historic team. Team Manager, Jon Dunn, announced the new driver at this year’s Performance Racing Industry (PRI) tradeshow in Indianapolis.

The team’s first order of business will be to get Alex a crossover license from Top Fuel Dragster to Nitro Funny Car prior to next season’s opening Camping World Drag Racing Series event at Gainesville, Florida in March.  The team will get Alex fitted for the Funny Car and then schedule a testing and licensing session for its new driver.  Alex has already had a chance to visit the team’s shop in California and spend time with Hall of Fame team owner and former Funny Car driver, Big Jim Dunn.

Jim and Jon Dunn have both paid attention to Alex’s racing career and have no worries about his ability to jump in the 11,000 hp Nitro Funny Car. “When you see a young driver that has accomplished as much as Alex has by winning big events like the U.S. Nationals in Pro Stock, and has competed in the Countdown to the Championship, it brings momentum to the team,” said Jon Dunn.  “My dad likes Alex’s enthusiasm for the sport and sees how much confidence he has to compete in multiple classes like Pro Stock, Pro Mod, Street Outlaws, Top Fuel Dragster, and now Funny Car.”

Becoming the driver for Jim Dunn’s Funny Car also means a full season of competition. Jim Dunn Racing will enter all twenty-one Camping World Drag Racing Series during the 2023 season, giving Alex plenty of seat time.  To say Alex can’t wait for the season to start is an understatement.  “This is an opportunity that has my emotions running rampant. The last couple of years in the Top Fuel category has really revolutionized my trajectory as a driver and widened my comfort zone. I’m grateful for the Dunn family to offer and bring more new, uncharted experiences to my story of drag racing at the highest levels. This is one of those deals that every driver only hopes for. To be able to bring my current resources and align with the extensive network of Jim Dunn Racing, the sky is the limit.  I’m ecstatic to see what 2023 will bring for all of us as we embark on this new endeavor together,” noted Laughlin.

Existing Jim Dunn Racing partners DiPinto Logistics, KGC, Blaze, USD, Lescure, Suzuki Extended Care, and Moon Equipment will return for the 2023 season, and be joined with several of Alex’s promotional partners including Havoline, Hot Wheels, 360 Wraps, and Speed Society.  The family racing team returns with Jim Dunn as tuner alongside veteran crew members including his granddaughter Johnna Dunn, who is being recognized in this year’s “Drag Illustrated 30 Under 30,” a distinction that Alex was previously recognized for as well.