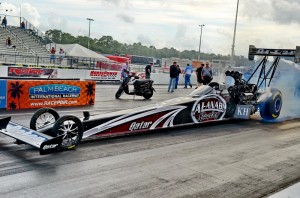 Al Balooshi’s gold Al-Anabi dragster is radically different from last year’s design.  Created by Roland Sands Design, the new graphics feature gold images on a black background with a chrome finish on the top of the body.

The team will participate in the PRO Winter Warm-up this weekend before returning to its shop near Indianapolis to prepare for the  start of the 2014 NHRA Mello Yello Drag Racing season.

Al-Anabi Racing operates out of multiple locations in both the United States and Qatar.  In the United States, the Brownsburg, Ind.-based operation is a two-car NHRA Mello Yello Drag Racing Series team that is managed by Alan Johnson Racing. Sheikh Khalid’s initiative has created increased international awareness of the State of Qatar while highlighting the nation’s international sports outreach. Alan Johnson is a 15-time NHRA champion in various capacities including crew chief, team owner and team manager.