AJ Berge of HEMI Tuner Performance drove his Whipple Supercharger, Security Dodge Power Brokers-sponsored Challenger Drag Pak to victory in the Holley EFI Factory Super Cars class during the 21st annual NMCA All-American Nationals at Summit Motorsports Park in Norwalk, Ohio. The 47-year-old Bayshore, New York resident is also a co-crew chief (along with Kevin Helms) on three Don Schumacher Racing (DSR) Challenger Drag Paks driven by Mark Pawuk, David Davies, and Warren Walcher, that were also in competition at Norwalk. This is the first NMCA event win for Berge as a driver, but not the first time he’s visited the winner’s circle at a NMCA race. Berge and Helms tuned DSR driver Mark Pawuk’ Drag Pak to victory earlier this year at the NMCA season opener at Bradenton. 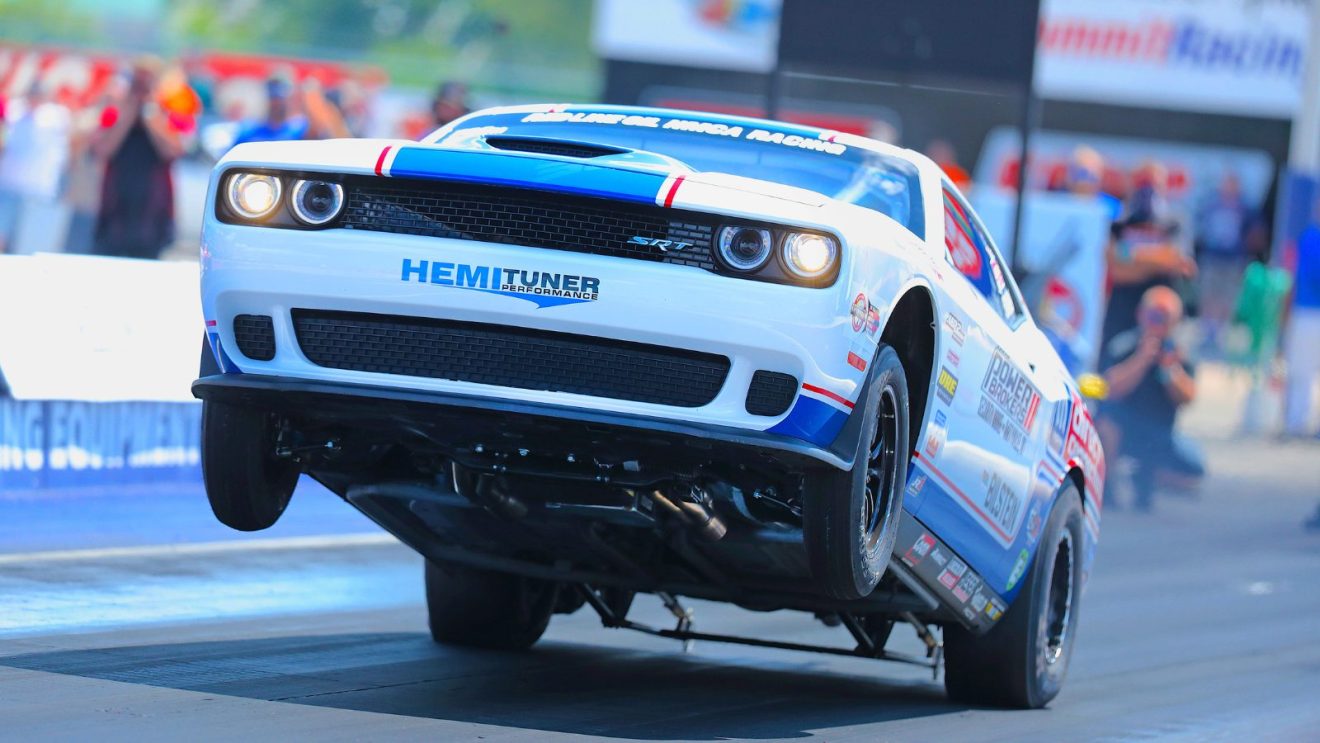 “I’m pinching myself. It’s been such a long road to get here and to this level of performance. After purchasing my Drag Pak about a year ago and joining the Don Schumacher Racing (DSR) organization, we’ve learned a great deal as to what these cars want and have made changes,” said Berge. “We did struggle during qualifying this weekend, as we had some chassis set-up problems with the car, and it was fighting us. But, getting more power out of our supercharged HEMI was never a problem for our team. We did well at the NMCA Martin race up in Michigan a few weeks back, ended on the pole during one of the qualifying sessions and because we couldn’t complete the Michigan race due to rain, we had to finished up the eliminations at Norwalk.

“Prior to this race, we had 35 runs on the engine, so we went home and swapped out the motor, trans, and converter, and made wholesale changes before heading to Norwalk. So, we really didn’t have a chance to test prior to coming here (Norwalk). During qualifying, we made corrections to really take advantage of what we’re learning, and the car responded by going faster. It was tough to take out my fellow teammates like Mark (Pawuk) and Warren (Walcher) during eliminations. In the final round against Trip Carter’s Cobra Jet, I was ready. Luckily Kevin Helms was able to help coach me when it came to driving and we put our heads together to get our Drag Pak to the finish line ahead of the Cobra Jets that have been dominating all season. We took a big jump in the tune-up that normally we would not have done at a NHRA event, and it worked. In the heat, I was able to run a 7.85 ET for the win but Tripp (Carter) was next to me with a 7.87 ET.”

Berge continued, “Every run I make on my Drag Pak gives us valuable data. It’s part of my responsibilities to DSR to make sure all the team cars are taken care of. At NHRA events, I don’t race against my teammates in Factory Stock Showdown, I run Comp Eliminator, which is a totally different class, but it still allows me to gather run information for our team cars. In a way, my car is a guinea pig to try different things and if something works, Kevin (Helms) and I look at the data gathered from my car, decipher it, and apply that knowledge and changes to all the DSR Drag Paks. Our goal is to put a DSR car in the winner’s circle every time and with the Dodge Power Brokers NHRA US Nationals coming up, that will be our mission.”