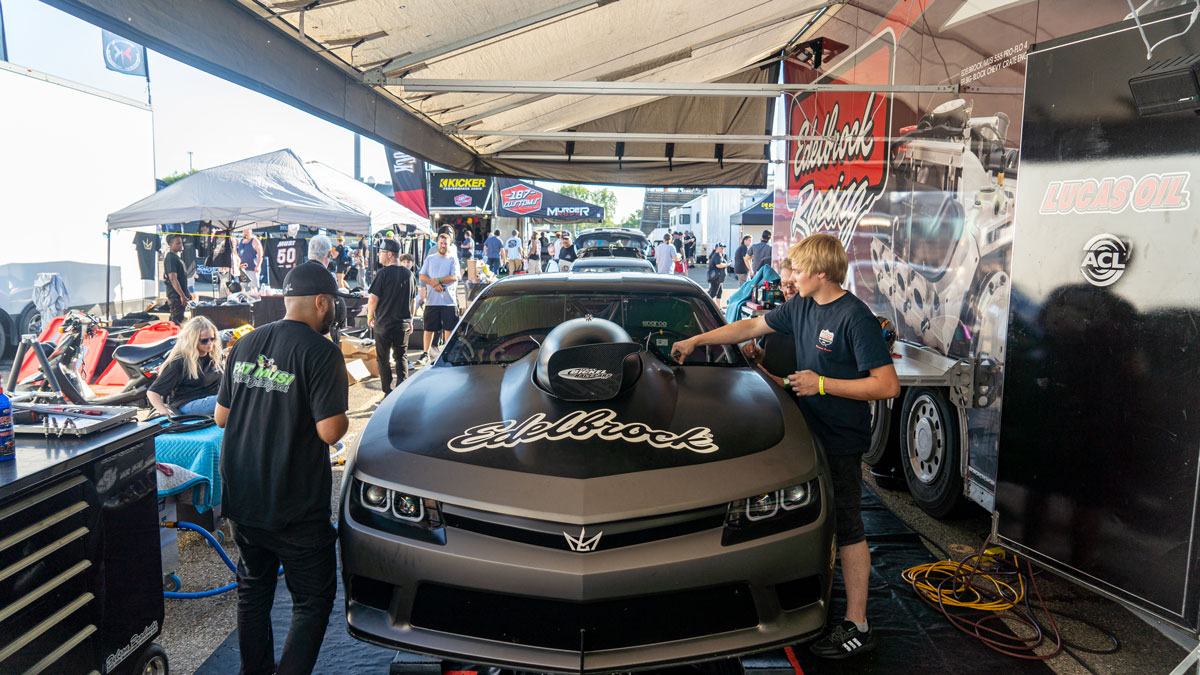 A week after a terrifying top-end wreck in Darlington, Lizzy Musi and the Musi Racing team are determined to rebound as quickly as possible. That means a short turnaround and the return of the Edelbrock-equipped Lucas Oil “Aftershock” Camaro for this weekend’s Street Outlaws: No Prep Kings race at Cordova International Raceway in Cordova, IL.

With the popular No Prep Kings tour returning just a week after Darlington to cap off a rigorous four-race stretch, Musi Racing had to quickly adjust following the wreck in the new ’69 Camaro known as “Bonnie,” which was making just its third appearance since debuting last month.

The new car is already back under the watchful eye of builder Robert Hayes with the intent of having it ready by the end of the month, but in the meantime that meant pivoting back to “Aftershock” for at least this weekend.

“We’re going to get Lizzy some seat time and get her comfortable again,” Pat Musi said. “’Aftershock’ isn’t the car ‘Bonnie’ is, but we can get it down the track. She’s anxious to get back out there. (The crash) is a setback, but it’s not something we can’t overcome.”

If there’s one thing that describes the Musi Racing team, it’s resilient and that’s already been on display this week.

Hayes has been diligently working away on the car, with the team noting there wasn’t major damage after the car got loose on the top end and hit the wall in Musi’s matchup with Brandon James. The car needs a new front half and rear quarter panel, but the chassis is in good shape and Pat Musi expects the car to be back in action before long.

He also noted the litany of companies who have stepped up to help, praising the likes of Edelbrock, Lucas Oil, Newell INX, ACL RACE Series, SRI Performance, Strange Engineering, Moroso, Penske/PRS Suspension, Brown & Miller, and Glasstek, who stepped up in a big way by supplying a new nose for the car much quicker than Musi originally anticipated. That kind of support didn’t go unnoticed as the team remained steadfast in returning “Bonnie” to the track as quickly as possible.

“What Robert Hayes has done in two days, he’s like Houdini,” Musi said. “And without Torry at Glasstek we’d be in a bad spot. This car is going to be together faster than anybody can believe or possibly imagine. How quickly this car gets back out there, it’s going to be a testament to our partners and our team.

“Our commitment was to make all the races and that’s what we’re going to do. It’s all about this team and now we get to see how we react to the situation.”

He’s confident Lizzy will be ready to compete this weekend in Cordova, noting she didn’t suffer any injuries from the crash. She was sore following the collision with the wall, but her father was impressed with how she reacted afterwards. Noted tuner Dean Marinis will join the team in Cordova this weekend while Hayes will stay back working on the new car, and Musi remains confident the team can be competitive to finish off this four-race trek.

“She’s in good spirits and she’s a heck of a driver. She got out after the crash and said she drove it too far,” Musi said. “Stuff like this happens and when you’re competing on raceday, it’s a different ballgame. It can happen in an instant. I’m proud of her and we’re all ready to get back after it.”