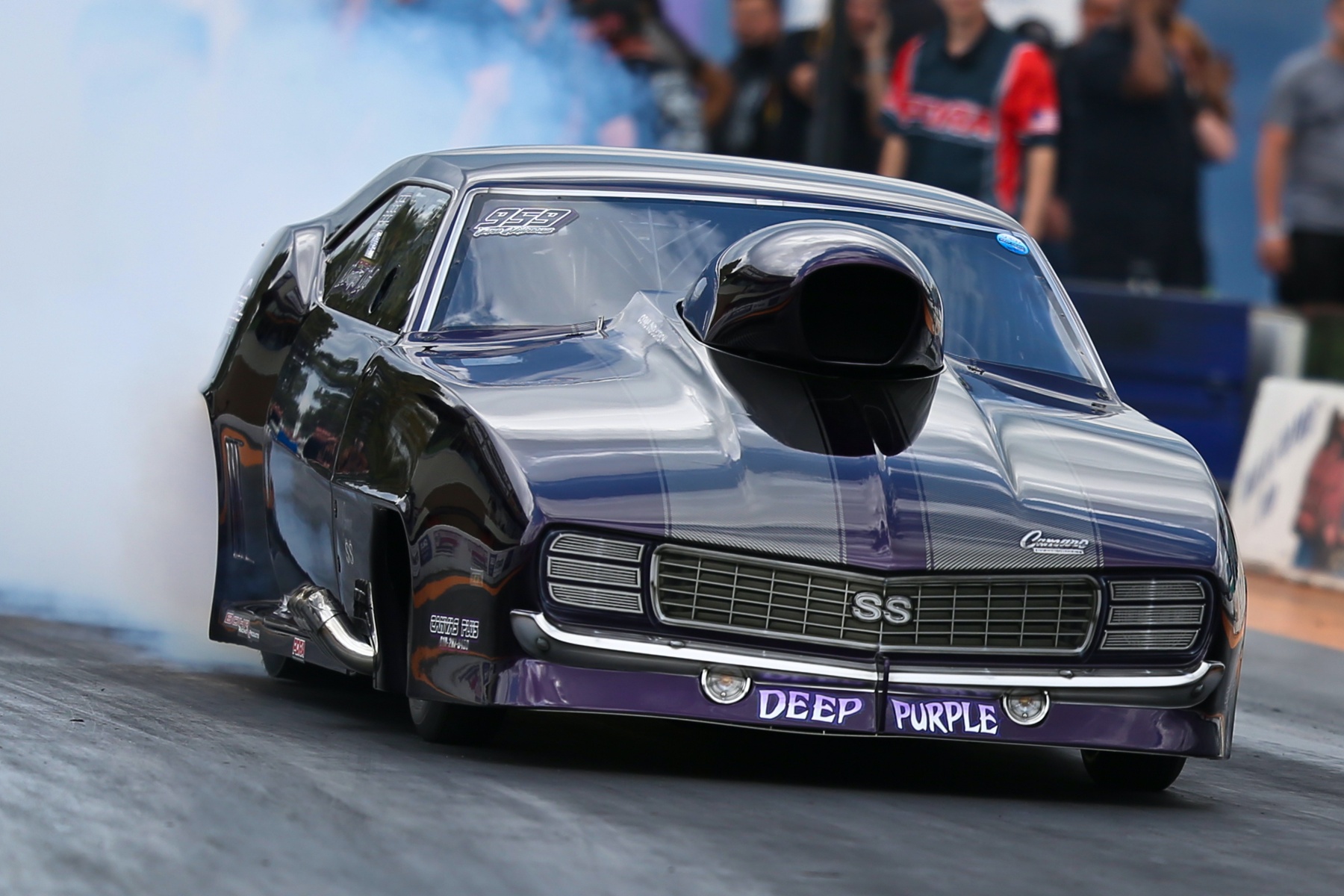 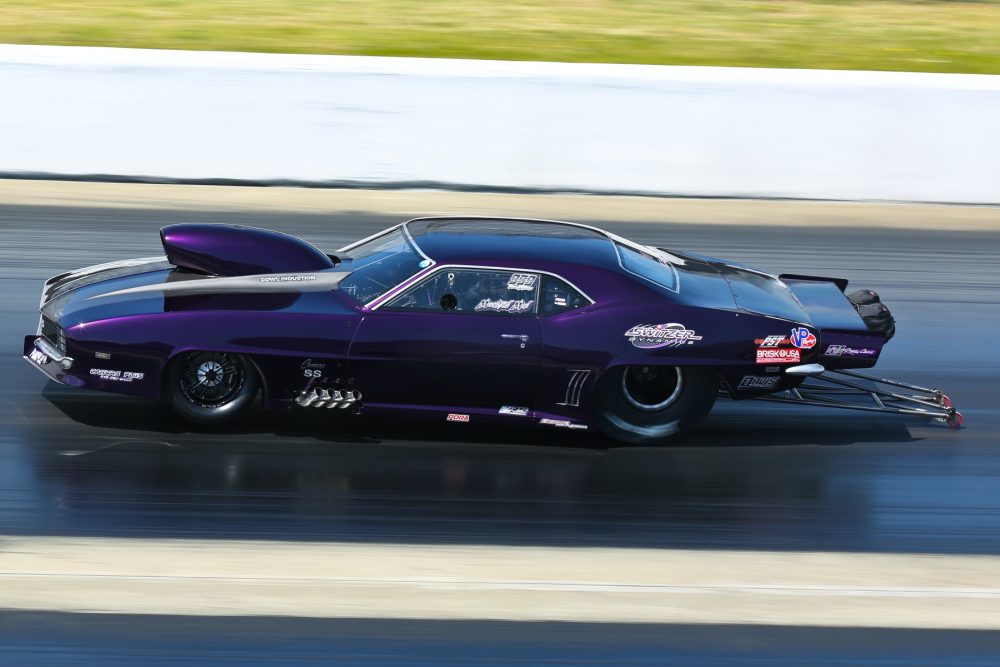 “Mountain Man” Mike Achenbach once thought he wouldn’t run in PDRA Pro Nitrous because the competition was so tough, but after now winning two events over the last year, he’s proven that he’s one of those tough competitors himself. The Pennsylvania native recorded a weekend-best 3.668 at 206.80 in his Brandon Switzer-tuned “Deep Purple” ’69 Camaro in the final round to knock out nearby Smithfield, North Carolina’s Jay Cox in the final round. Cox slowed to a 4.366 at 127.33 in the runner-up effort.

“This win means a lot,” Achenbach said. “We struggled with the car at the end of last year. We took it to Brandon [Switzer]’s shop, went over it, did some different things to it, and I think he’s got a handle on it now. We’ll see what happens. I’m so new at this out here. I said I would never really run over here because it’s the best of the best. I started over here last year at a couple races and really liked it. It’s a family-oriented deal. I just love it.”

Cox, who tested extensively at GALOT Motorsports Park over the offseason, qualified third in his Musi-powered Butner Construction “Pumpkin” ’69 Camaro. He ran a 3.725 to beat John Vergotz in the first round, a 3.695 over teammate Marcus Butner in the second round, and a 3.693 to drive around Fredy Scriba in the semis. 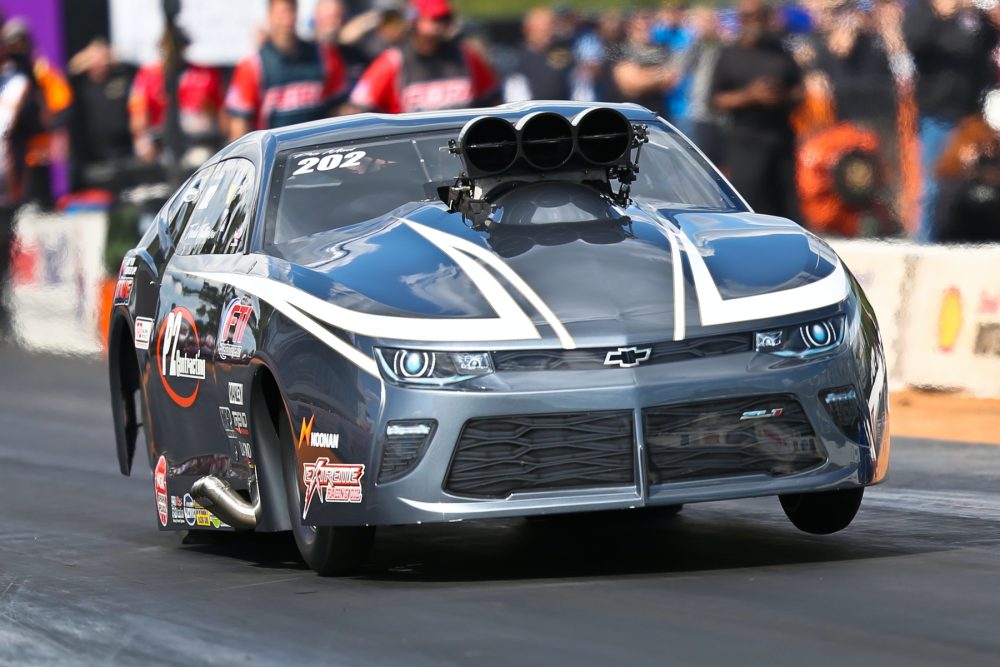 North Carolina drag racing hero Todd “King Tut” Tutterow added another Pro Boost victory to his list of accomplishments when he beat fellow North Carolinian Stan Shelton in the final round. Tutterow in his screw-blown P2 Contracting/FTI Performance ’20 Camaro fired off a 3.588 at 212.29 to overcome Shelton’s holeshot advantage and 3.61 at 210.70.

“A man told me before, you can’t win them all if you don’t win the first one,” said Tutterow, who was the 2021 championship runner-up. “We’ve got Kurt Steding and Wendi Steding [of P2 Contracting and P2 Racing] and Paul Lee and Greg [Samuel] at FTI supporting us. I have a good bunch of guys at my shop keeping all this stuff going. This is very important to me. We had 24 cars here, a good bunch of cars. Any one of them could’ve won. We just put runs together and it all worked out. I just need to get Kurt up here in the winner’s circle. I’d like to see us go one and two in the finals.”

Tractor pulling veteran Stan Shelton enjoyed his best weekend yet in Pro Boost competition driving his screw-blown Culp Lumber ’67 Mustang. He qualified No. 9 and opened eliminations with a holeshot win over two-time NHRA Pro Mod world champion Stevie “Fast” Jackson in a 3.635-to-3.627 race. Another huge holeshot win followed in the second round when he knocked out No. 1 qualifier and record setter Melanie Salemi and her 3.57 with a 3.602. A consistent 3.603 gave Shelton the semifinal win over Scott Wildgust and his 3.858. 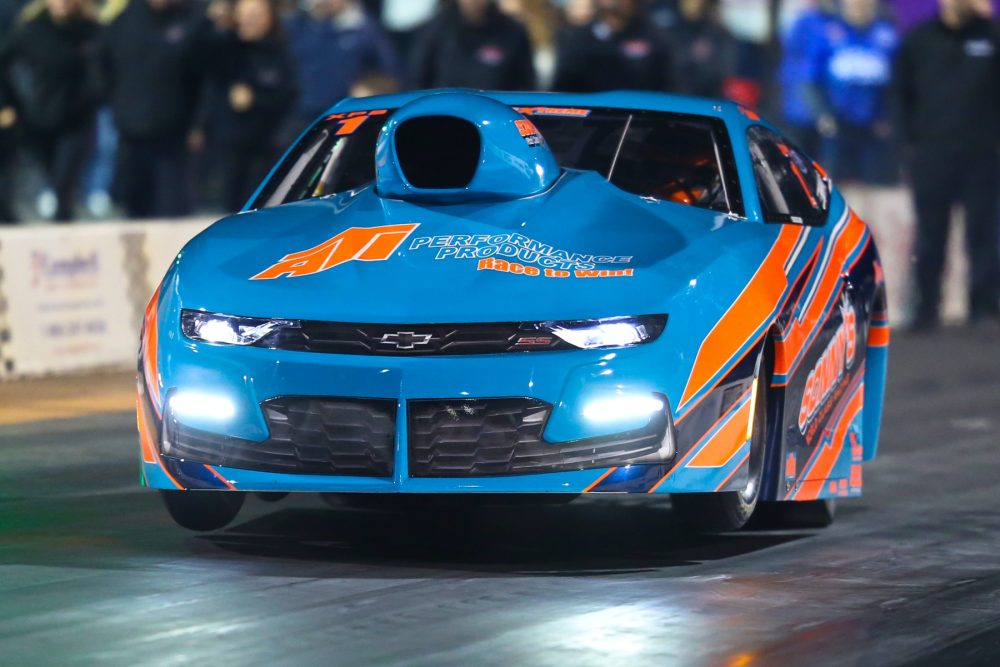 After winning the Extreme Pro Stock world championship last season, Chris Powers still felt like he had something left to prove as the 2022 season started. His new Sonny’s Racing Engines/ATI Performance ’21 Camaro made its competition debut at the East Coast Nationals and proceeded to qualify No. 2 and carry Powers to victory, proving that Powers will be a championship contender again this season. Final-round opponent Justin Kirk left the line just ahead of Powers, but lost traction almost immediately. Meanwhile, Powers unleashed low E.T. of the weekend, a 4.014 at 178.76.

“Sonny’s with us,” said Powers, referring to the late Sonny Leonard. “He’s done so much for us with my career and our performance. Kelly [Ward] and Francis [Leonard] and Jr. [Ward] still doing all the work and keeping things running with the shop, this is all credit to them showing their power. They’ve got the smoke. We proved it on that last lap there. I can’t say enough for Chuck Samuel and Rob Bealko. This is all credit to them. They work their butts off on this car. To have a brand-new car like this and come out and win, it’s special.”

Kirk, a third-generation Pro Stock wheelman, qualified No. 8 in his Sonny’s-powered Kirk Racing ’12 Mustang before running a 4.077 to move past the first round over Dillon Voss, who broke after the burnout. Kirk used holeshot advantages to win the next two rounds, running a 4.06 to beat No. 1 qualifier JR Carr’s 4.017 and a 4.063 to defeat Tommy Lee’s 4.015.

Making his Pro 632 debut, Orlando, Florida’s Alan Drinkwater put the class on notice with consistently quick reaction times and an equally solid Kaase-powered ’04 Escort prepared by two-time Pro 632 world champion Johnny Pluchino. Drinkwater raced past some of the toughest drivers in the class to win in his debut, ultimately running a 4.213 at 169.64 in the final round to finish ahead of Walt Lannigan Jr.’s 4.208 at 169.59. It was Drinkwater’s third holeshot win in four rounds.

“It’s a dream come true,” said Drinkwater, who thanked car owner Kenny Floid, John and Johnny Pluchino, and cousin and crew member Preston. “We had all the right people around us. Just the right place at the right time. The engine, ‘Gambini,’ was already in another car out here, Johnny’s old 632 car, so it’s back. We’re just glad to be able to put it in the winner’s circle. We had all great guys around us. I tried to do my job the best I could and we got the best of everybody today.”

Lannigan was making his return to Pro 632 competition as the new driver of $hameless Racing’s Musi-powered ’68 Camaro, which won the last two world championships with Wes Distefano driving. Lannigan and tuner Troy Russell picked up where Distefano left off, qualifying No. 1 and charging through eliminations. He used a 4.215 to beat Mike Murphy, a 4.14 to defeat Lexi Tanner, and a 4.111 on a semifinal bye run to earn lane choice for the final round.

As the defending world champion in Pro Nitrous Motorcycle, all eyes were on Chris Garner-Jones and his T.T. Jones Racing Hayabusa to see if he would continue his championship performance. Garner-Jones and his family-based team delivered, qualifying No. 3 and racing into the final round, where Garner-Jones won in a side-by-side race with Jeff House. The two riders left the line with nearly identical reaction times, then Garner-Jones maintained his slight lead with a 4.08 at 174.41 to beat House’s 4.086 at 173.78.

“I want to defend [the championship] and I want to repeat, and three-peat, four-peat, five-peat, six-peat, if I can,” said Garner-Jones, who thanked his family, including brother and tuner William Garner and his late father, T.T. Jones, as well as PDRA and supporters like ProFab, FuelTech, Mickey Thompson Tires, Summit Racing, and Drag 965. “But it’s drag racing – anything happens in this sport. This is a relief for sure. I We didn’t run our best at all, but we still came out with a win. I feel great about that. When we do run good, we should have a much better chance at winning.”

House and his Fast By Gast Hayabusa scored a major round one win over multi-time world champion Eric McKinney, running a 4.068 to McKinney’s 4.11. It was a warmup for House’s semifinal matchup against another multi-time champion, Travis Davis, who ran a 4.055 to come up short to House’s 4.045.

Defending world champion Tim Essick proved that offseason rule changes and a mix of new Pro Street competitors can’t slow him down, as he picked up another win to start the season in his ProCharger-boosted “Brown Sugar” ’18 Mustang. In the final round, Essick posted a 3.966 at 194.07 to stop No. 1 qualifier Nick Agostino, who slowed to a 4.849 at 113.28.

“We plugged and chugged on it all winter long,” said Essick, who thanked his sponsors and team led by longtime friend Dan Whetstine. “We knew we were going to be a hundred-plus [pounds heavier] and we just had to try a bunch of different stuff. We experimented through some testing and qualifying and ended up coming around and putting a package together for race day. It’s just a dream come true. It’s huge to get that wintertime monkey off your back. It definitely puts some steam straight ahead. We’ll do a little bit more testing, try to iron some things out, make it a little happier and we’ll be ready for Ohio.”

Agostino, a Canadian Outlaw 10.5 veteran making his Pro Street debut, laid down a 3.939 to defeat another first-time Pro Street racer, Bill Lutz, in the first round. He tested the limits on a second-round bye run, pedaling to a 4.489.

A pair of Ohio-based nitrous cars squared off in the Elite Top Sportsman final round. Past Top Sportsman world champion Chris “Nitrous” Nyerges had the starting line advantage in Dr. Gary Schween’s Buck-powered ’20 Corvette, but he had to lift after leaving the starting line. Steve Drongowski went on to run a 3.967 on a 3.89 dial-in in his Buck-powered ’55 Chevy to get the win.

Past world champions Steve Furr and Matt Cooke met up in an all-North Carolina Elite Top Dragster final round. Furr’s starting line advantage and 3.786 on a 3.77 dial-in allowed him to get the win over Cooke, who ran a 4.029 on a 4.01 dial-in.

Nick Meloni also made his way to the final round in Top Dragster 48, but came up short to Tisha Wilson. Wilson had the starting line advantage and recorded a 4.434 on a 4.40 dial-in in her ’01 Undercover dragster to win over Meloni’s 4.302 on a 4.24 dial in his ’16 Dan Page dragster.