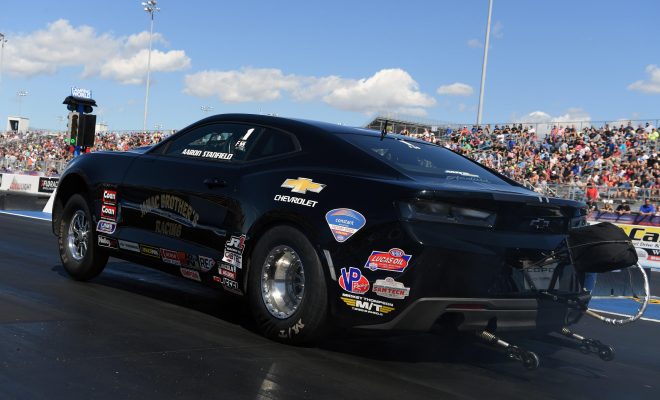 For the second time this season, 2019 Factory Stock Showdown champion Aaron Stanfield qualified No. 1 at a Constant Aviation Factory Stock Showdown national event. On the final day of qualifying at the NHRA Midwest Nationals from World Wide Technology Raceway Stanfield made the two quickest runs to solidify his position at the top of the field. In the final session he bettered his previous best run with a blistering 3.765 second pass at 176.12 mph.

“That last run felt like poetry in motion,” said Stanfield, who was the No. 1 qualifier at the Dodge Mile-High Nationals. “The front end didn’t come up too much because the track was pretty tight. We were able to keep the front end down. It set me back in the seat pretty good. I could tell it was a really good run.”

Stanfield blasted down the track to end the second qualifying session and posted the quickest time of the weekend to that point to move to the No. 1 qualifier position. His 3.773 second time moved him around. Mark Pawuk raced to the top spot just prior to Stanfield’s run. Stanfield was No. 5 coming into Saturday’s first session.

“Just because we qualified No. 1 doesn’t mean we are perfectly set up for race day,” said Stanfield. “I would anticipate we won’t quite have the track that we had this evening. The conditions and the track came to us, so we decided to get after it on that last run. Tomorrow we will have to slow it down just a little bit to make sure we get it down the track.”

Stanfield was challenged today by veteran driver Mark Pawuk who was also making consistently quick runs including a 3.772 second pass at 179.14 mph in the final qualifying session. In the first session on Saturday Pawuk ran 7.793 seconds at 179.28 mph to jump from No. 10 to No. 2.

On Friday night Leonard Lottig of Meyersdale, Pennsylvania, raced to the provisional No. 1 with 7.817 seconds at 178.83 mph pass. Lottig will face U.S. Nationals champion Jesse Alexandra in the first round. Alexandra will have the Constant Aviation Factory Stock Showdown $1,000 bounty on his head.

No. 3 Leonard Lottig vs. No. 14 Jesse Alexandra