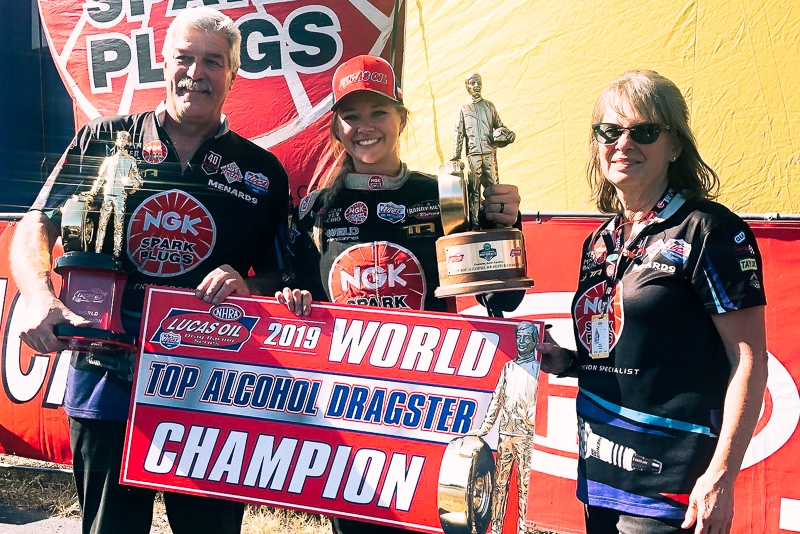 Heading into one of the biggest racing rounds of her life, Megan Meyer felt at peace. It was Monday at zMAX Dragway, the Top Alcohol Dragster world championship was within reach, and Meyer was competing at her sponsor’s race, but there was a calm that came over Meyer.

It was a far different feeling than two days earlier when Meyer lined up against Shawn Cowie in a must-win situation in the second round. It was then when the magnitude of what Meyer was after – her first world title and the potential first for a female in TAD – suddenly hit her going against the battle-tested Cowie.

“That was the biggest hurdle to get over. I was so nervous and I remember just shaking,” Meyer said. “After the burnout and pre-stage, I was still having all these flashbacks to when I lost to Shawn. I just had to tell myself to calm down, get out of your own head and try to think of the positives. Mia (Tedesco) reminded me earlier that they’re chasing me. That really helped and I just try to go do my thing.”

Cowie was no match for Meyer that round, as she was quicker off the starting line and cruised to the victory. From there, Meyer was rolling with confidence, finishing the job on Monday in Charlotte to claim her first career world championship.

“I felt completely different going into Monday. (Coughlin) was right on our heels, but I felt a lot more confident,” Meyer said. “We only had 30 minutes between the semis and finals, but we somehow pulled out a (5.14). My dad (Randy Meyer) knew what he was doing with the tune-up and we were able to finish it off.” 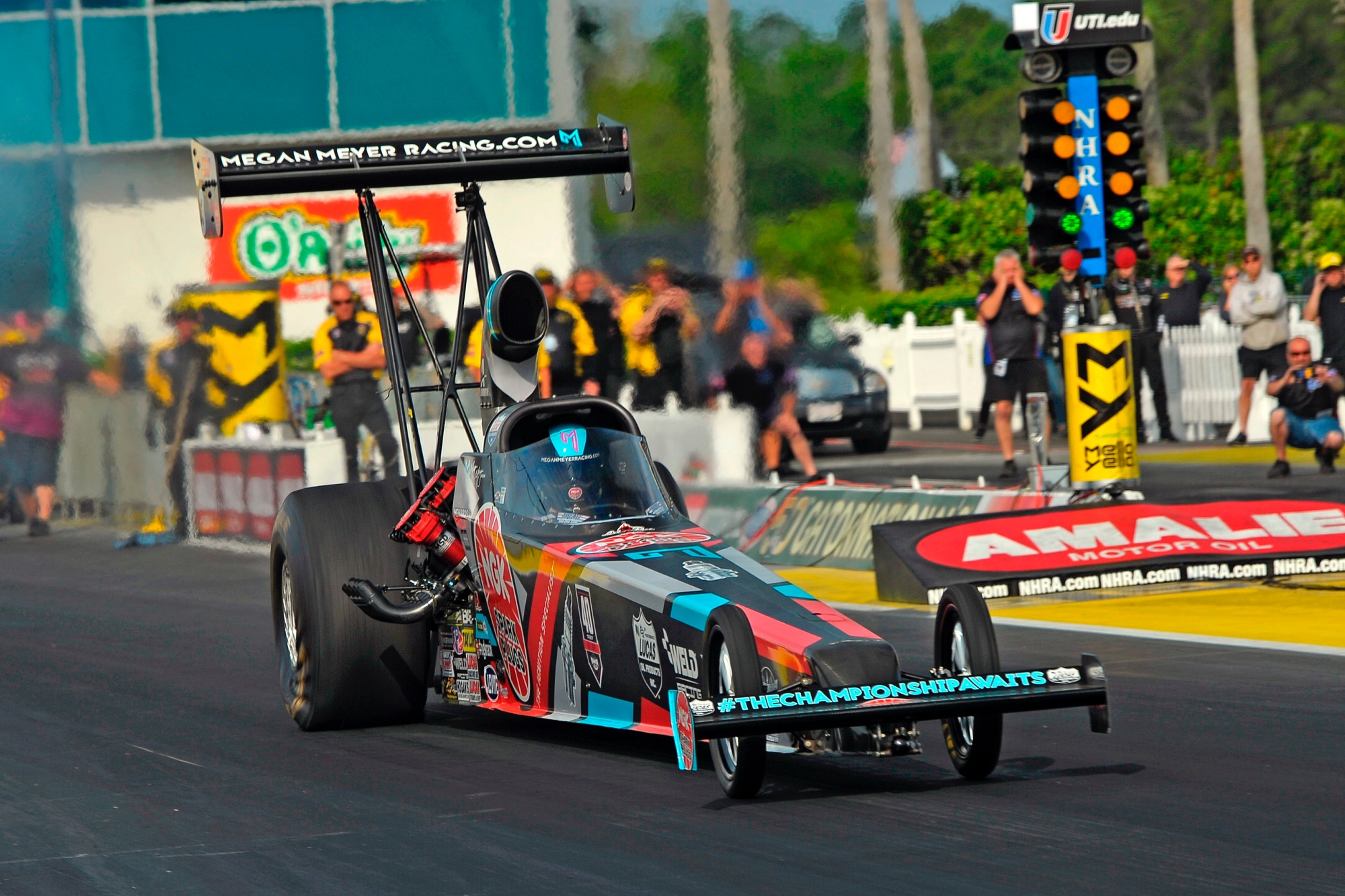 The memories of that incredible weekend are still alive and well for Meyer, who is still trying to process just how spectacular her 2019 season was.

She followed up the championship-clinching weekend in Charlotte with a victory the next weekend in Dallas, putting the ultimate capper one of the most impressive seasons in TAD memory.

It demonstrated Meyer’s growth as a driver, becoming just the fourth female to win an NHRA Lucas Oil sportsman championship, her ability to perform under pressure and the prime example of a simply dominant season for Randy Meyer Racing.

With a team that also included her sister, Rachel, Julie Nataas, Camrie Caruso and Matt Sackman, the team racked up 15 wins – including at least one from every driver – and finals appearances at nearly every race. With Randy Meyer’s tutelage, the team stayed a step ahead throughout, enjoying unparalleled success in his 40th year of racing.

“By far it was our best year ever,” Megan Meyer said. “It all goes back to the hard work from the guys and that my dad has put in over the years. All the guys work so well together and I trust them so much. Being that this is my dad’s 40th year of racing, it’s just another thing that makes this more special.” 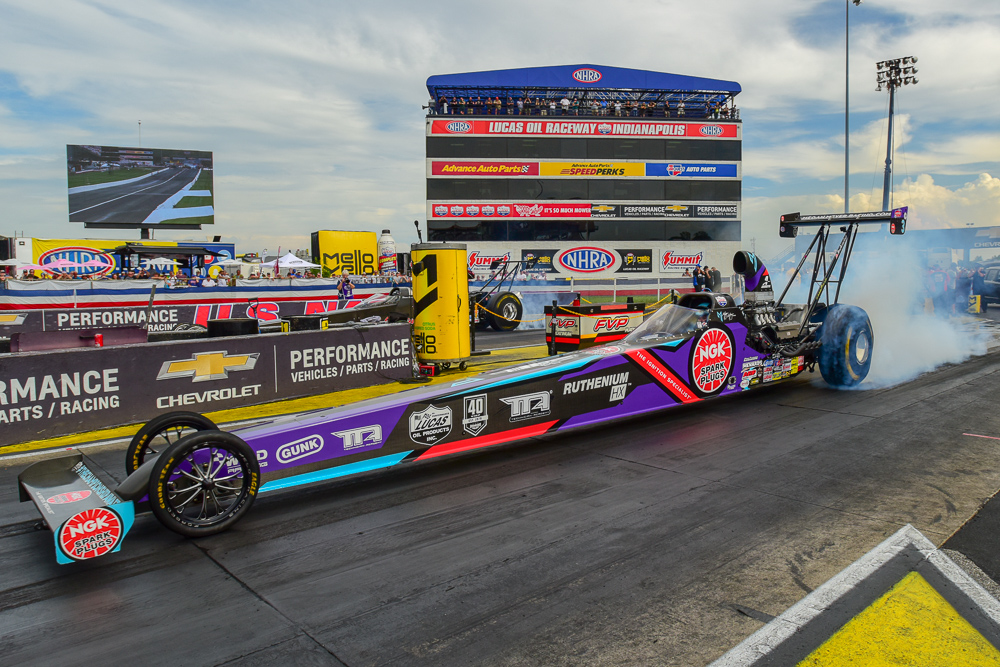 Meyer made 13 final-round appearances in 2019, collecting eight wins, five of which came at national events. Of those, Meyer grabbed noteworthy wins at the 50th annual Gatornationals and the U.S. Nationals, as well as the Charlotte and Dallas victories to close out the year.

Meyer more than did her part as well, improving her lights to a significant degree. She was regularly in the .030-.040 range, finding a comfort level in the car she had never experienced before.

“I felt like I improved on my lights and I was just more consistent on my depth staging the car,” Meyer said. “I started working on that in the off-season, and I was a lot more comfortable and relaxed. I was a little less tense and that led to better reaction times.”

The spotlight on Meyer only figures to get bigger after a season like this one, but she’s fine with that – and she’s also plenty content continuing in Top Alcohol Dragster.

She feels good with her place in the sport as the winningest female in TAD, feeling proud of the class and no pressure to try to move into the Top Fuel ranks. For Meyer, racing in TAD is where her heart is at, and her next goal is simply trying to defend her championship.

“I’ve only raced with my family and it would be hard to leave that,” Meyer said. “I’m perfectly content being in Top Alcohol Dragster. The class is growing so much and thriving right now, and I want to try to defend my title. I love the competition we have and next year everyone’s going to try even harder to take us down. But winning this title was such a great feeling.” 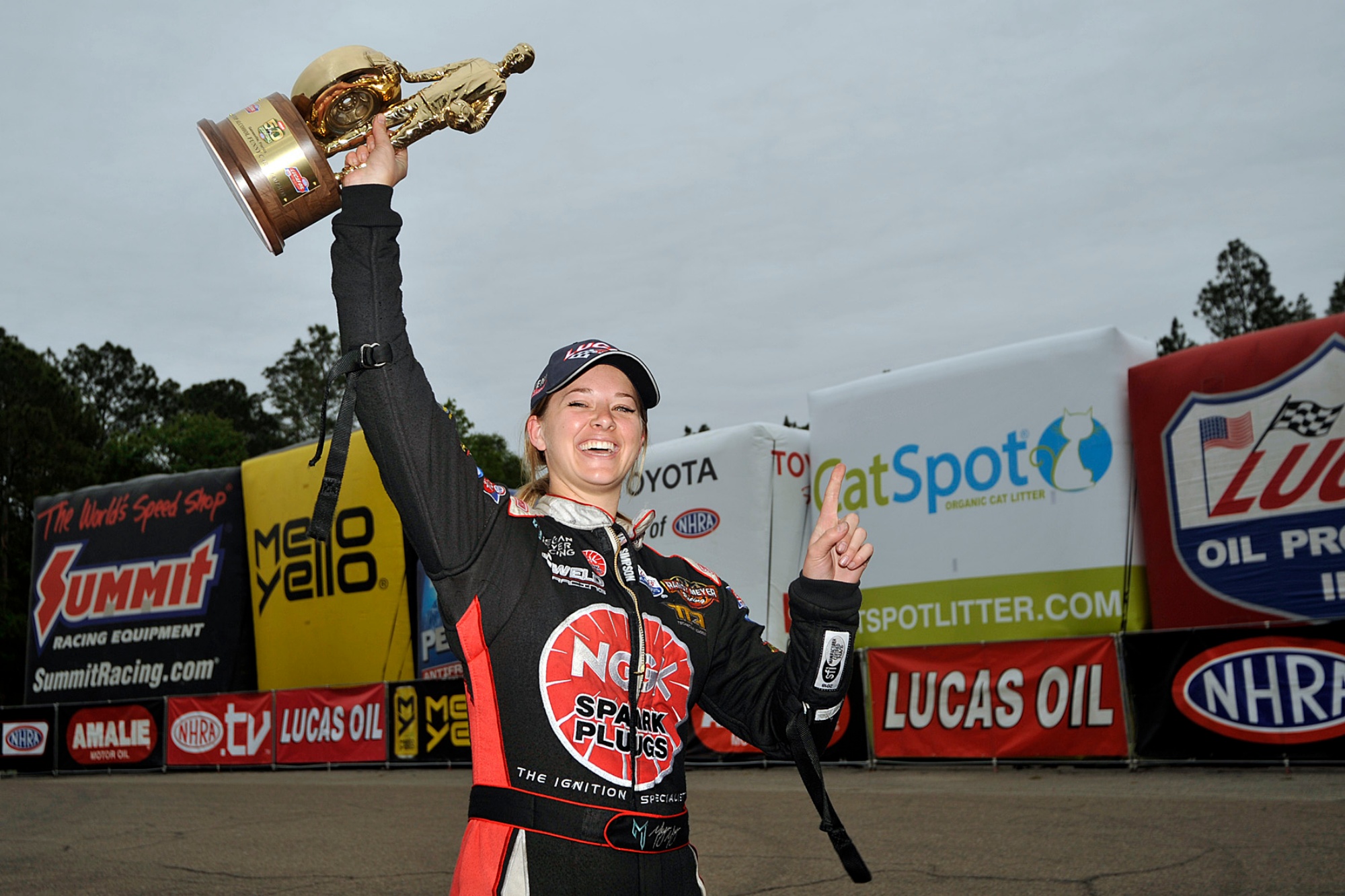