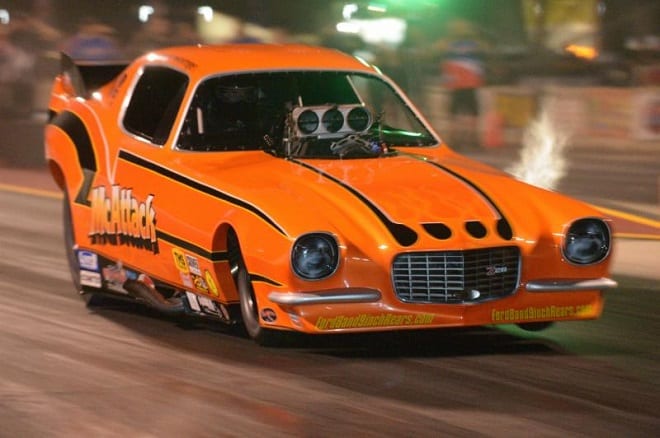 AMSOIL Nitro Funny Car presented by Aeromotive driver Mike McIntire Jr. has had a crazy sophomore season, to say the least. The 2014 International Hot Rod Association (IHRA) Nitro Funny Car rookie has a record four wins, led the points during the first half of the season, missed one race due to his father’s heart surgery and recently found out that he and his wife, Susie, are expecting a baby girl.

McIntire Jr. took over the driving duties of his father’s 1970 “McAttack” Camaro at the start of the 2014 IHRA Nitro Jam Drag Racing season. It didn’t take long for then 29-year-old to acclimate to his new surroundings. McIntire Jr. drove the orange and black Camaro to its first win three races into the season at the Southern Nationals. His second and final win of the season came later in the year at the Pittsburgh Nationals. Jason Rupert claimed the AMSOIL Nitro Funny Car presented by Aeromotive World Championship and McIntire Jr. finished second; 119 points behind the leader.

The progression continued for McAttack Racing as McIntire Jr. won the 2015 season-opener at the Southwestern Nationals against Rupert. The McIntire family received some drastic news following the first Nitro Jam: Mike Sr. needed a quadruple bypass operation. McAttack Racing missed the Mardi Gras Nationals as Mike Sr. recuperated but returned at the Southern Nationals. The momentum picked up where it left off and McIntire Jr. went on to win the next three events. Not too long after the three race winning-streak, he and his wife, Susie, announced they were going to have their first child.

The tide would shift mid-season and McIntire Jr. found himself in familiar territory as Rupert and his “Bays and Rupert Black Plague” began to dominate the AMSOIL Nitro Funny Car presented by Aeromotive class. Rupert has won the last four out of five events with only one Nitro Jam remaining until the Summit World Finals featuring Nitro Jam. Heading into the San Antonio Nationals Fueled by Sunoco, Rupert has a 104 point lead over McIntire Jr.

“It has been a heck of a year,” stated McIntire Jr. “It’s really a tight points battle between Rupert and I with only two races remaining. I think I’m only one and a half rounds out from the lead. I told him (Rupert), when I spoke to him the other day that, I want my record back regardless of what happens though! Either way I’m happy with our season and ready to get back to racing.”

The championship title in every class is still up for grabs and the competition will be fierce heading into the San Antonio Nationals Fueled by Sunoco at San Antonio Raceway on September 25 – 26. The Summit World Finals featuring Nitro Jam on October 9 – 10 at Memphis International Raceway marks the final event this season. Tickets are available online for both events at www.NitroJam.com.