“Any time you can stack up against the eight drivers that were in that thing, just to be there is an honor, and to beat them is an even bigger honor,” Johnson said. “We got it done today. It was a lot of fun. I appreciate K&N. Man, what an awesome company to sponsor this thing. We’ve been out here with them for many years now, and they’re quality people and a quality company.” 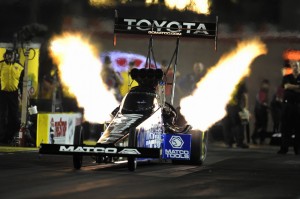 In Top Fuel, Brown remained on top of the field in his Matco Tools dragster. Brown’s Friday performance of 3.780 at 320.43 gave him his first No. 1 qualifying position of the season and 33rd of his career. He will face fellow competitor Brandon Bernstein in Sunday’s first round of eliminations, which are scheduled for 11 a.m. (PT).

“We’re going to put our hats down and hit it hard tomorrow,” Brown said. “We got one win here in 2011, but we’ve been to the final round so many times that it feels like we’re due.”

Hight scored his first No. 1 position in the Funny Car class in 19 races with his Friday run of 4.053 at 315.19 in his Auto Club Ford Mustang. It was the 44th career No. 1 for Hight and his fourth at this event. He will open eliminations against Jeff Arend.

“It’s been a long 19 races,” Hight said. “It’s been longer than that since we won a race. I’m proud of our car and the way our team worked to get back here. Seeing the elapsed time slips this weekend has been good for the morale of the team.”

Sophomore sensation Courtney Force drove her Traxxas Ford Mustang to the No. 2 qualifying position with a run of 4.068 at 315.86 while 2012 world champion Jack Beckman was third with a 4.095 at 306.05 in his Valvoline/MTS Dodge Charger.

Edwards powered his I Am Second Chevy Camaro down the track with a performance of 6.642 at 208.26 to claim his fourth consecutive No. 1 qualifying position of the season in Pro Stock. It was the 45th top qualifying effort for Edwards, who will face Larry Morgan in the opening round of eliminations.

“I’m glad we ran really good, but we lost the [K&N Horsepower Challenge], and I’ve been trying to win that thing for like 12 years now. I don’t know, I can’t do it,” Edwards said. “I have a fast car. I just had some parts failure there that first round, and it’s just one of those things.

“We came back and adjusted it and went out there, and we ran our fastest run of the weekend in the worst conditions. Hat’s off to my guys. They’re doing a phenomenal job. I’m just real proud of everyone. It’s great to come out and run good and be No. 1 qualifier. We can’t win the Horsepower Challenge now, but hopefully, tomorrow we can set our sights on a Wally.”

K&N Horsepower Challenge winner Johnson will start second with a performance of 6.652 at 207.53, while Challenge runner-up Enders-Stevens qualified fifth with a 6.675 at 207.05.