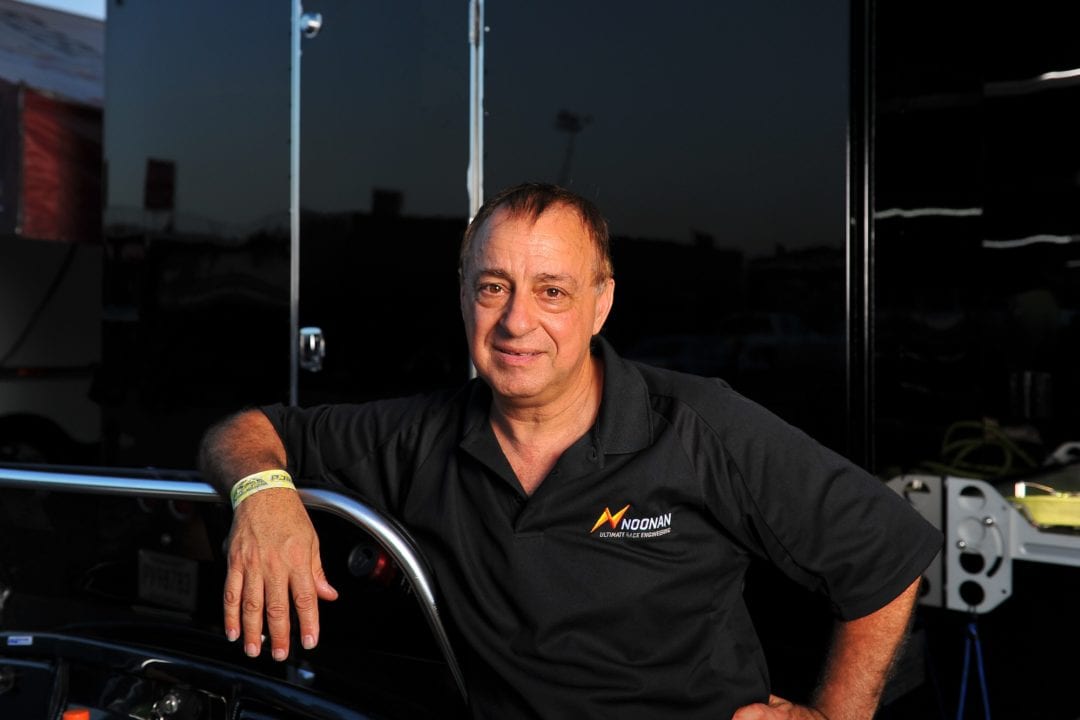 Australian doorslammer hero John Zappia made headlines at Virginia Motorsports Park last Sunday morning when he recorded the quickest and fastest quarter-mile pass for a supercharged Outlaw Pro Modified entry. His screw-blown Noonan Ultimate Race Engineering ’69 Camaro lit up the scoreboard with a 5.424-second et at 265.33 mph on a test pass at the PDRA World Finals.

Zappia, who said he began his U.S. tour in August with the goal of resetting the Outlaw Pro Mod quarter-mile record, had limited opportunities to take the Jerry Bickel Race Cars-built Camaro to the 1320-foot mark. The car’s early numbers at PDRA Drag Wars at GALOT Motorsports Park showed the potential for a quarter-mile record, but GALOT is a 1,000-foot track, leaving Zappia and team with one option. 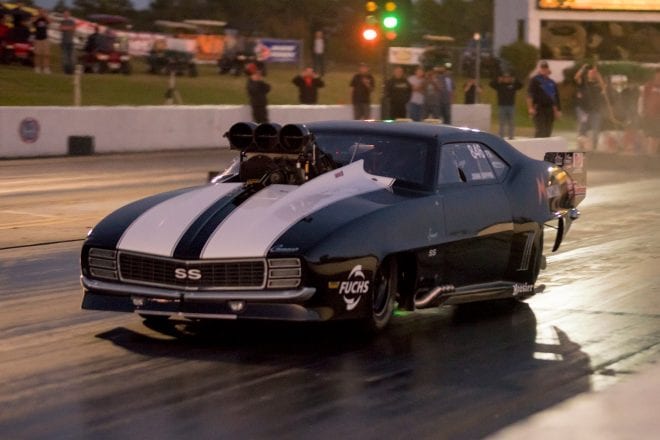 “I was scheduled to fly home on Tuesday to race the Pro Slammer in Australia, so we thought, Alright, this is it. This is where it has to happen,” Zappia said. “We missed it on Thursday during testing. The car went left and I had to pedal it.”

Between the World Finals’s four qualifying sessions and the two passes Zappia made in eliminations, he and the Noonan team felt confident they were ready to try it again.

“After running a 3.54 in the semifinals and losing by two hundredths, we were ready to go out and try the quarter mile again that night, but the curfew wouldn’t allow it. So the PDRA allowed us to give it a try on Sunday morning.”

Though originally scheduled to conclude Saturday evening, the World Finals ran to completion on Sunday, Oct. 22. Zappia waited in the staging lanes while the remaining professional classes completed their final rounds, then he fired his Noonan 4.9 Hemi and laid down a squirrely burnout. The 10-time Australian Top Doorslammer champion backed up, pre-staged, brought up the rpms and staged the clutch-equipped entry like an alcohol Funny Car before blasting off down the quarter mile.

“It was awesome. There’s no way I could’ve gone home and thought about what could’ve been for the next several months.”

The record-breaking pass gave Zappia and the Noonan brain trust – Darrell Makins, Lee White and Jamie Noonan – a sense of confidence that their car is capable of dipping into the 5.3-second range in time. Zappia hopes to be the first to break that barrier, but he’ll be challenged by newly crowned PDRA Pro Boost world champion Jose Gonzales and his Q80 Racing/El General Racing team. Gonzales in his Pro Extreme C7 Corvette recorded a 5.403 at 259.71 at South Georgia Motorsports Park in March. 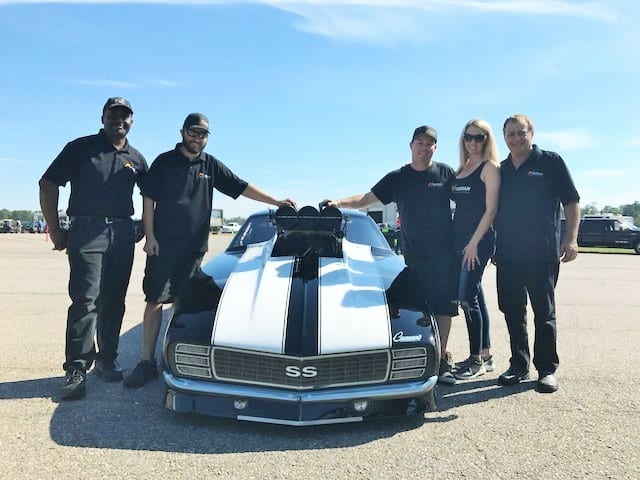 “We were three hundredths off from being the quickest doorslammer outright, but we know it’s there,” Zappia said. “It’s got mid-5.3s in it, easy. This gives a goal to come back next year. ‘El General’ said Saturday night, ‘If you break the record, we’ll get it back.’ They’re going to Vegas for the Street Car Super Nationals, and we wanted to go to Vegas but we just can’t get back – too many commitments back at home.”

Zappia will spend this winter – the middle of Australia’s drag racing season – racing in the Thunder 400 Pro Slammer 2018 Championship and searching for funding to assist in a 2018 return to the U.S. He plans on attending a handful of PDRA races and the occasional standalone event, like Summit Motorsports Park’s Shakedown at the Summit.

“We’ll look at coming back whenever financing makes it viable,” Zappia said. “We’re going to try to build our sponsorship base in the U.S. We have a good sponsorship base in Australia, and obviously some of those companies have helped us come here: Fuchs Lubricants, Dananni Hotshots, along with Boninfante Friction, B&J Transmissions, SDS Fuel Systems, and Hoosier Tires. It costs big bucks to do this, and we really appreciate those who support us.”