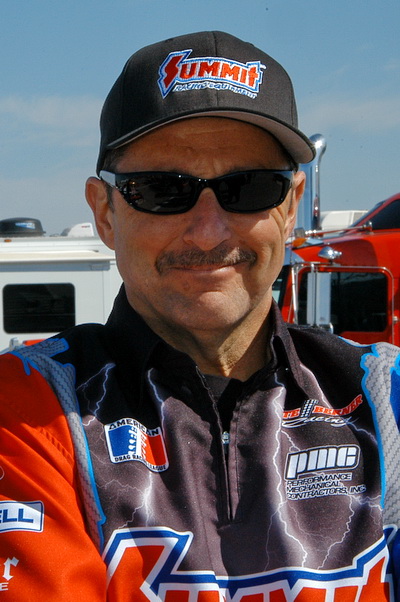 Throughout 2013, rumor mills teemed with hints and questions about the return of Pro Stock to the IHRA. Recently, the rumors were put to rest as IHRA made the announcement that Pro Stock would be featured at two of their Nitro Jam events this year.

Pete Berner (above) and the Summit Racing Equipment team will be among four teams returning to the genesis of Mountain Motor Pro Stocks for the Grand Bend Nitro Jam, July 19-21 and the Martin Nitro Jam, August 9-10.

“The secret is out,” Berner said. “We’re going back to IHRA, and I’m really looking forward to racing again at what used to be home for Mountain Motor Pro Stock. This four car, Chicago style shootout is sponsored by Summit and I want to thank Jim [Greenleaf], as well as Scooter [Peaco, IHRA Vice President], for their efforts in making this a reality. I know that Pro Stock is a favorite class of many drag racing fans and I hope they are as glad to see us back at IHRA as we are to go back. 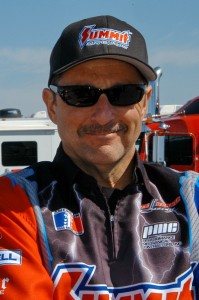 “The last time we ran quarter-mile, we set the World Record,” continued Berner. “With the car and power we have now, we’ve surpassed our eighth-mile time on that record setting run, so depending on the conditions, we might have the opportunity to reset it again.”

“Having Mountain Motor Pro Stock back at GBM for the 14th Annual IHRA Mopar Nitro Jam Nationals is a dream come true,” he said. “Many of our fans grew to love this class as it evolved within the IHRA program because it is the one class based on pure power, no power adders, no blowers, just 800-plus cubic inches of raw horsepower.

“GBM also holds many firsts re the Mountain Motor Pro Stock program – we were the first track to have an MMPS break into the 6.30s and then into the 6.20s. With the advancements the class has made since then there is no telling what they will run this year.”

“We’re thrilled to have the thunder of Mountain Motored Pro Stock back at GBM. There’s nothing else with the authoritative roar of 900 plus inches of power and it’s going to be great to hear that music again at the Mopar Nitro Jam Nationals,” he said.

Berner will also be attending the Martin Nitro Jam, August 9-10.

“We always look forward to racing at US 131. Even just testing there, we have fans come out to show their support. I’m sure the Pro Stock and Summit fans in that area will be happy to see the return of Pro Stock to IHRA. I know that I and my team are excited and looking forward to what the future holds.”

Jason Peterson, general manager of US 131 Motorsports Park, said he’s excited to see what mountain-motor Pro Stocks will do on his quarter-mile track.

“It’s been several years since we’ve seen 900 cubic inch, unlimited Pro Stocks run on the quarter-mile. It’s great to have them back and to see great side-by-side, 220+ miles-per-hour racing. I’m confident it will be worth the wait,” Peterson said.