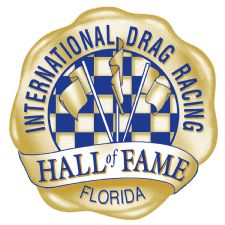 The International Drag Racing Hall of Fame, based at the Don Garlits Museum of Drag Racing in Ocala, Florida, has announced the inductees for the 23rd class to the Hall of Fame for 2013.  The prestigious induction ceremony will take place in Gainesville, Florida at the Paramount Plaza Hotel & Suites on Thursday, March 14, 2013, preceding the NHRA Gatornationals at nearby Gainesville Raceway.

A cocktail reception starts at 6:00 PM (Eastern), with dinner served at 7:00 PM.  NHRA Announcer Bob Frey will again serve as the evening’s Master of Ceremonies.

The International Drag Racing Hall of Fame Class of 2013

Dave Boertman: This  Stock/Super Stock racer was one of the most prolific racers during his NHRA and IHRA career.  Boertman’s engine building and driving skills propelled him to five NHRA World Championships in Stock or Super Stock, five NHRA Division 3 titles, and 15 IHRA Stock or Super Stock World Championships; capturing 17 NHRA National Event Wallys, and holding over 30 class records. He has a unique place in drag racing history, competing in the first Husband-Wife final in Super Stock at the 1971 NHRA Summernationals–losing to Judi with a red-light.

Wally Booth: The quiet-spoken Booth, with partner Dick Arons, set the Pro Stock world on its ear in the early ’70s driving their seemingly overmatched red-white-blue AMC Gremlins (and later, Hornets) in a class dominated by GM, Ford and Chrysler products. Booth delivered five National wins for himself, and Booth-Arons engines powered four more in the Maskin & Kanners sister Hornet. Booth had earlier success with “Rat Pack 1” Chevy Camaro in Pro Stock, and earlier in his career in Stock and Super Stock.

Harry Hibler: He can be classified as a “man for many seasons.”  He began his career as a Tech Inspector at the San Fernando drag strip in the early Fifties, and became the track manager.  But Hibler also wanted to test his racing abilities–often resulting in some major engine explosions–earning him the nickname “Hand Grenade Harry.”  When San Fernando closed, he went to work for Bob Petersen at Petersen Publishing as the Publisher of HOT ROD Magazine, as well as Car Craft and Circle Track Magazines.  He also served the performance automotive aftermarket as a member of the Board of Directors of SEMA, and was named to the SEMA Hall of Fame in 2002.

Hirata, Hobbs & Vodnik: This group of two veteran tuners (Kenny Hirata and Phil Hobbs) from Indiana, and a teenaged driver from Ohio (Bobby Vodnik, then 19 years old ) scored one of the biggest upsets in the early history of drag racing when they won the U.S. Nationals’ “Top Eliminator” final in 1963. Tension was high as “Big Daddy” Don Garlits was having vibration problems, and Hirata and Hobbs were sweating a damaged piston.  However, Vodnik’s earlier runs had been an average of a tenth quicker, and Garlits gambled. The veteran Garlits left early in “Swamp Rat V,” handing the win to young Vodnik, who saw the wounded piston hold together for a stellar 8.62 second pass (which would have covered Big Daddy’s 8.65).

K.S. Pittman:  The late K.S. “Tiger” Pittman was noted for his “take no prisoners” approach to the sport as he competed across the country with the S&S Team, competing at AHRA, IHRA, NASCAR and NHRA-sanctioned drag races.  His early career saw him join with Fred Stone and Tim Woods on their first gasser, joined later by Doug Cook.  Pittman then joined forces with Chuck Stolze to help form the legendary S&S Racing Team, and became one of the most feared names in the “Gasser Wars” of the 1960s, driving A/GS ’33 Willys, then a ’41 Willys, and later an Austin and an Opel GT.  He was a member of the 1964 U.S.Drag Racing Team which went to Great Britain and introduced the sport to Europe.

Dick Rosberg: The late Dick Rosberg, a veteran Southern California Funny Car pilot, began campaigning Top Gassers at Lions Drag Strip before being tabbed by the legendary Tim Beebe to wheel his new flopper at the end of the 1960s. After a stint behind wheel of Tim Arnold’s “Hallucination,” he partnered with Bob Novak and Tim McDaniel on the “Northwind” fueler, and later the well-known “Fighting Irish” Funny Cars.  Jet cars then captured Rosberg’s attention, and the trio campaigned a sleek TransAm-bodied jet car with Stroh Brewery Company backing.  He actively sought to improve the safety of jet cars, and served as a jet car inspector for a number of years.

Louis Senter: One of the original pioneers of the performance automotive aftermarket, and a passionate racer of the late 1940s through the 1960s, he co-founded Ansen Automotive, and built a huge following among Ford V8-60 flathead racers on the dry lakes, sprint cars and drag racing circuits.  Senter helped develop drag racing in the Los Angeles basin, first holding races at the Santa Ana blimp base, and then building and running the famed Saugus drag strip at an abandoned naval air station.  He was one of the founders of the Speed Equipment Manufacturers Association (now Specialty Equipment Market Association)–SEMA–and became one of the early inductees to the SEMA Hall of Fame.  Senter was also passionate about racer safety, developing one of the earliest fire suits and the safety bellhousing, among other products.

Robert C. Post, PhD: Also to be honored by the International Drag Racing Hall of Fame, with its Founders Award, is Bob Post grew up in Pasadena, CA, with a lot of great drag racers, and while his own time as a racer lasted only a few years, he never lost his love for the sport throughout a long career as a writer, editor, teacher, and museum curator. In 1973, he went to work for the Smithsonian Institution, and in 1986 he began planning an exhibition sponsored by DuPont called A Material World. Here was his chance to fulfill a lifetime ambition, to spotlight a Top Fueler at the National Museum of American History, and Don Garlits agreed to donate his World Champion Swamp Rat XXX. When Don lit SR XXX one last time on the steps of the museum, it got Bob thinking. He had followed drag racing from the start, and he was a professional historian who had written a dozen books. It was time for a history of drag racing…thus followed High Performance–The Culture and Technology of Drag Racing, 1950-2000, the book that Don Garlits calls “the Bible” of drag racing. Published in 1993, it has gone through many reprintings, and a new edition of it came out in 2001. While the book has sold well, its numbers pale in comparison to the number of people who first got close to a Top Fueler at the Smithsonian.

Presenters will be named at a future date.

Corporate table sponsorship programs are available.  A table sponsorship costs $1000, which includes seating for ten with logo on the table, a banquet program listing, and inclusion in 2014 promotional brochures, a pair of free passes to the Don Garlits Drag Racing Museum plus logo placement on the banquet DVD credits.  Table sponsors will receive a DVD of the evening’s event, and additionally, each sponsor will be recognized from the stage during the televised portion of the event. Individual seating tickets will be available at $100 each.