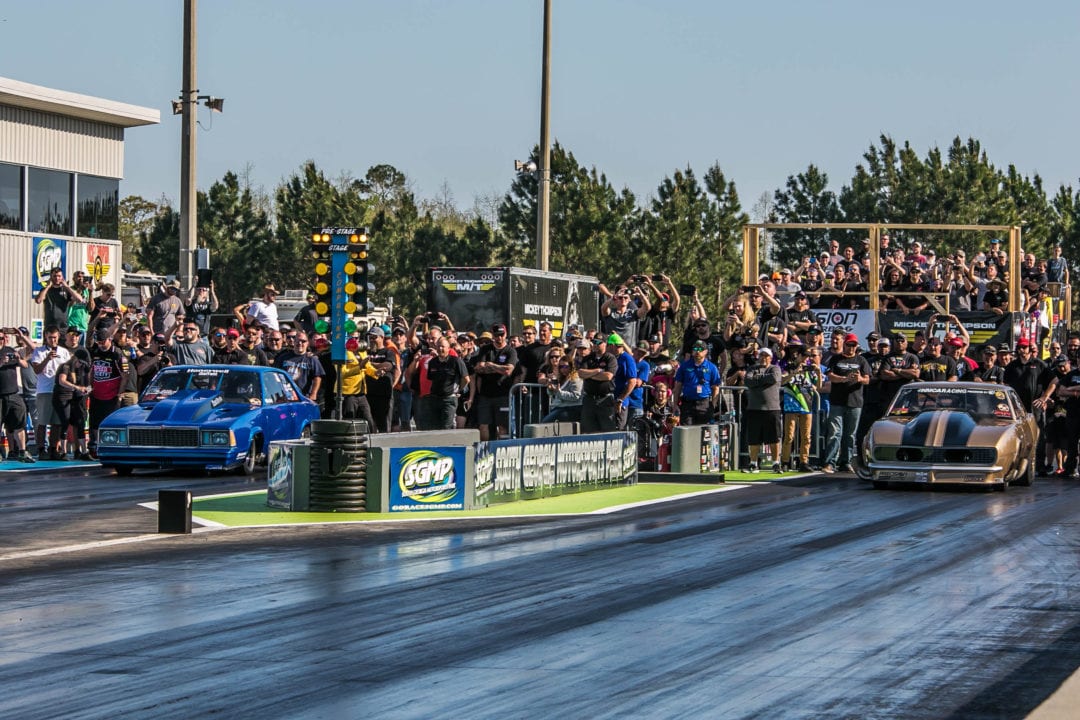 Since its announcement, there has been a considerable amount of hype surrounding Donald Long’s Radial vs. The World Sweet 16 event. With a $101,000 winner-take-all prize and a totally different concept than any of Long’s previous drag radial events, there was also a lot at stake. But after an utterly incredible three days at South Georgia Motorsports Park, it’s safe to say the race exceeded all expectations.

With that in mind, let’s take a look at 15 wildest, wackiest and most awe-inspiring moments from the thrill ride in Valdosta. 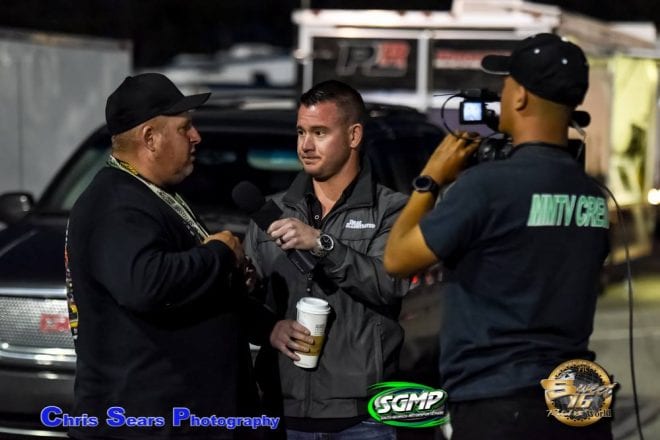 DUCK DOES IT AGAIN: Let’s be clear, Long didn’t have to do something radically different. His Lights Out and No Mercy events are unequivocal successes and have been for years. But he deserves plenty of credit for trying something totally different, where one class – Radial vs. The World – was the sole focus, there were limited tickets sold and it was available for live viewing only on pay-per-view. He threw traditional concepts to the wind, but Long believed in it, trusted the work he did and set the stage for the ultra-talented drivers to deliver. That happened in record-setting fashion, which certainly helped the feel of the weekend, but positivity and excitement was flowing all three days. You would be hard-pressed to find a negative word said about the Sweet 16 event from any angle. The energy was palpable, the event was a smash hit and it was another home run for Long. 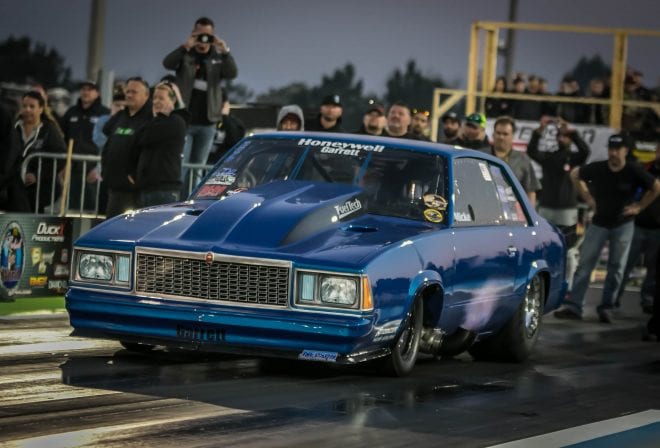 MICKE RUNS THE TABLE: What more can you say about the performance of Mark Micke, car owner Jason Carter and the rest of his team? We ran out of adjectives by the time he claimed the $101,000 prize by beating Dewayne Mills in the final round, wrapping up one of the best weekends in drag radial history. Micke set the Radial vs. The World record three different times in two days, qualified No. 1, outslugged the biggest names in the class in eliminations and took home the biggest prize in radial racing history. To be that dominant in a class littered with such talent is beyond impressive, but Micke proved up to the task each time he made a run. He was record-breakingly quick, he was consistent, he was dynamite on the starting line and, ultimately, he was the best of the best. That’s a weekend worth remembering. 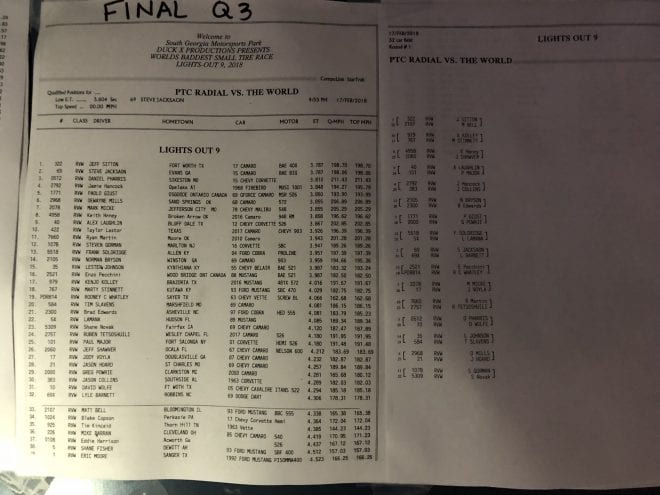 HOW IS THAT POSSIBLE?: Just a month ago, Jeff Sitton, the No. 1 qualifier at Lights Out 9, ran a 3.787 in Radial vs. The World. Amazingly enough, that number wouldn’t have qualified last weekend, a tribute to the impressive performances by everyone in the field. Sure, track conditions were different and the track was prepped for kill, but it doesn’t take away from the job the drivers and teams did to raise their performances to another level. 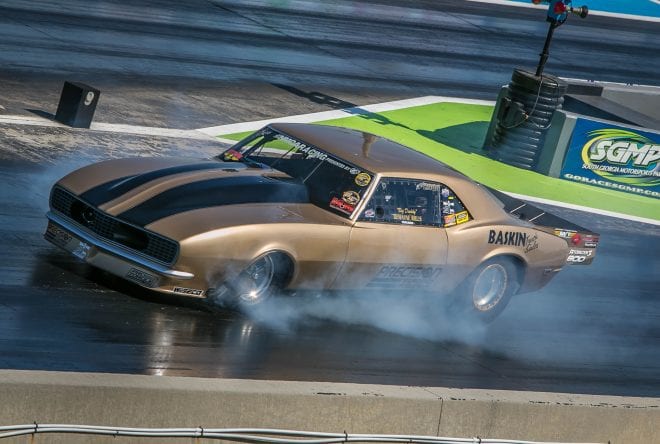 DON’T FORGET THE FIRST: Before all the madness ensued, we can’t forget who made history first. That honor will forever belong to Dewayne Mills, who went 3.698 to become the first driver in Radial vs. The World history to reach the 3.60s. Mills, a longtime standout in the radial world, deserves his moment in the sun for doing it first and completing another successful weekend that ended in the final round. 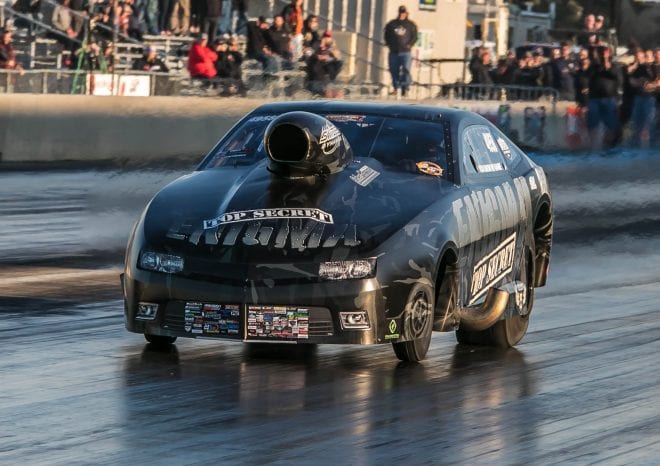 HANEY AGAIN IN THE CONVERSATION: Keith Haney proved one more time he is not a person to be taken lightly in the biggest drag radial races. Haney’s persona online is well known, both in his ability to dish it out and often be portrayed as a drag racing Internet meme, but on the track he is all business. Haney continues to be in the thick of things when it matters most, running well once again after his Lights Out 9 runner-up finish. His .002 red light against Dewayne Mills ended his day in the semifinals, but not before another consistent performance, including this awe-inspiring thrash in the pits before facing off with Mills. 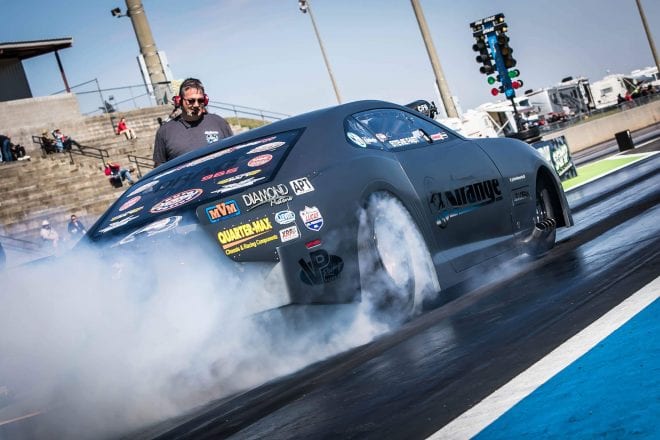 STEVIE FAST ALWAYS DRAWS A CROWD: As this weekend proved once again, nobody moves the needle quite like Stevie “Fast” Jackson. The Lights Out 9 winner didn’t have the result he wanted, losing to Mills in the second round, but plenty of attention still surrounded Jackson, who followed Mills into the 3.60s on Thursday. He did it again on Friday, setting a momentary record of 3.666 at 202.58 before Micke took it back. 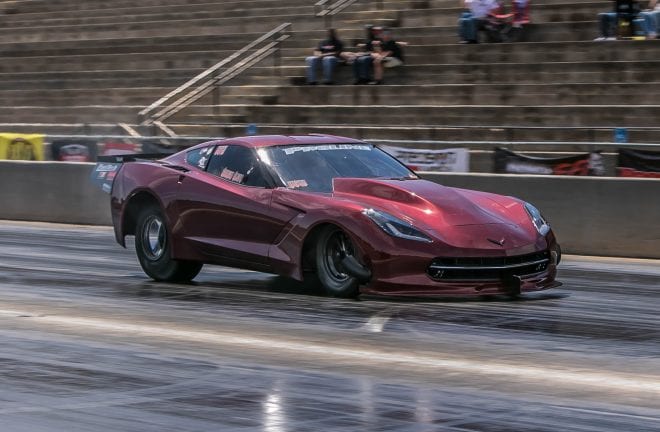 WELCOME TO THE PARTY: Daniel Pharris’ run to the 3.60s shouldn’t be forgotten, either, especially since his blast of 3.642 at 216.20 in the Andrew Alepa-owned C7 Corvette qualified him No. 2. It was a remarkable run from Pharris, even if his weekend ended with some surprising tire smoke against Haney in the second round. Still, you couldn’t help but enjoy the performances all weekend from Pharris in the striking Corvette.

HANCOCK GETS IT DONE: Jamie Hancock provided another feel-good movement of the weekend, becoming the first nitrous-powered radial car to reach the 3.60s when he went 3.68. Remarkably enough, it was also the quickest pass ever for Hancock’s Firebird, as Hancock and his father continue to hold their own against teams with far bigger budgets. 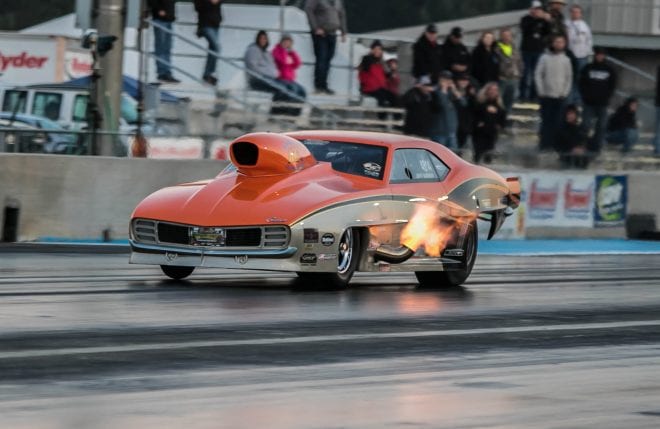 THE MASTER OF DIY: Without Jeff Naiser, maybe we wouldn’t have seen Jamie Hancock going in the 3.60s this weekend. Naiser, the ultimate do it yourselfer, builds his own engines and always represents himself well, running a 3.722 on Thursday, proving the 3.60s in a nitrous car were possible. With X275 standout Kenny Hubbard offering assistance, Naiser was solid, no surprise for anyone who has watched him compete over the years in a multitude of classes. 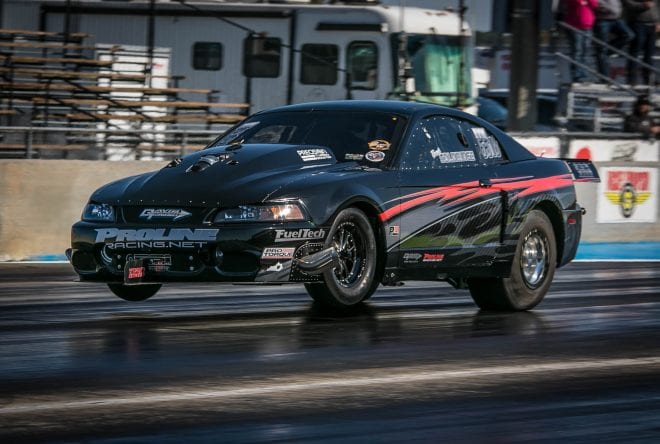 SOLDRIDGE THANKFULLY WALKS AWAY: In the midst of Micke’s first record-breaking run on Thursday, Frank Soldridge was having a pass he wishes he could have back. He crashed violently into the left wall, barrel-rolling several times. Though pretty beat up, as the pictures show below, he escaped any serious injury. 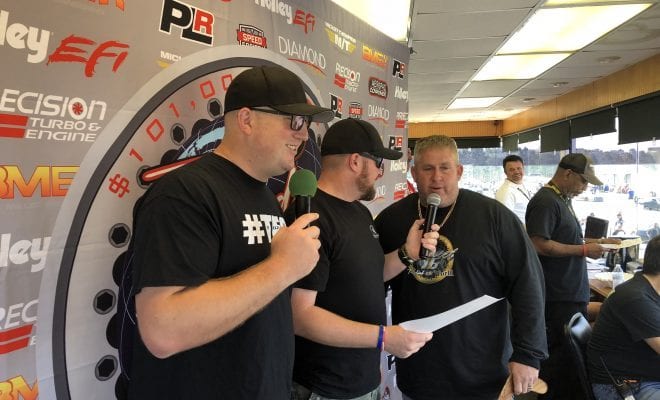 LOHNES, SEBRING KEEP IT ENTERTAINING: Huge kudos to the wildly enjoyable performances from announcers Brian Lohnes and Lee Sebring over the weekend. It’s a big challenge to keep the excitement and conversation going at a single-category race, but Lohnes and Sebring more than pulled it off. From their hysterical outfits – the “Dumb & Dumber” look was stupendous – to their interesting back-and-forth, the duo knocked it out of the park, another big reason why the weekend was such a success. 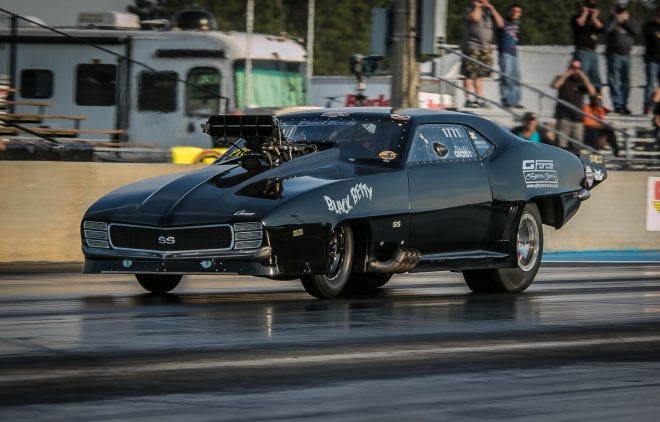 CONSISTENCY THE NAME OF THE GAME FOR GIUST: Paolo Guist wasn’t the quickest, qualifying 13th, but he rode consistency all the way to the semifinals. Running his Jim Salemi-tuned, 5-speed Liberty-equipped first-gen Camaro “Black Betty,” the Canadian was impressive doing things his way. The car had awesome starts, and ran smoothly from A to B and before being finally ousted by Micke in the semifinals. 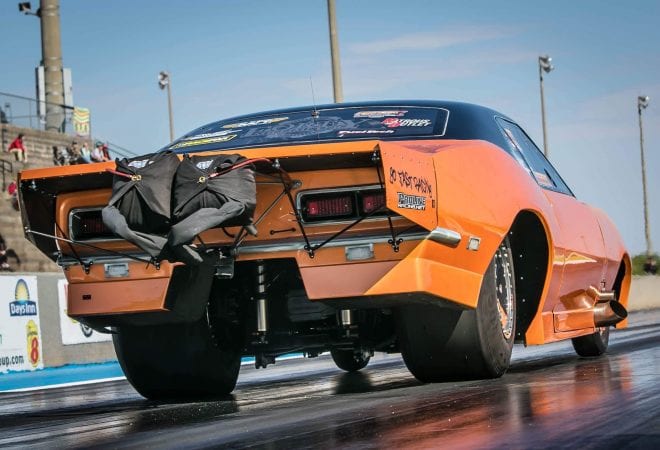 EXTREME MEASURES: Can we count this as wacky or will it prove to be innovative? Bryan Markiewicz brought some late-model, circle track technology to the dragstrip, using some moon-style wheel covers for his ’69 Chevy Camaro. The concept is believed to offer aerodynamic advantages and Markiewicz followed with a respectable showing on the track, qualifying ninth with a 3.740. If nothing else, it shows some impressive forward-thinking by the drivers in this class as they look for any and every advantage for increased performance and consistency. 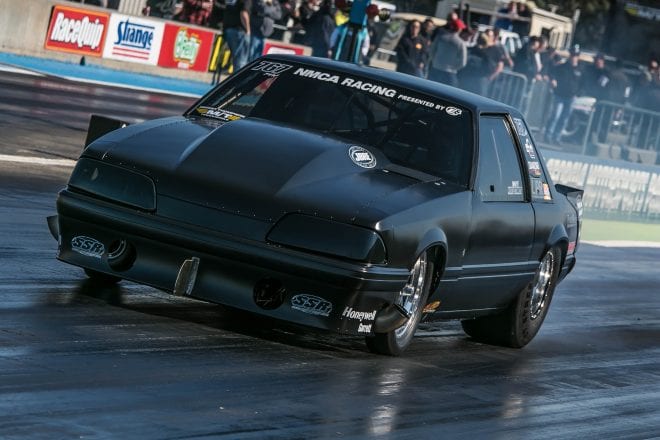 THE MOST WITH THE LEAST: The do-the-most-with-the-least combo award goes to Marty Stinnett, who made a career-best pass in his small-block-Chevy-powered combo in his Mustang. Stinnett also recovered from scuffing the wall on the first pass of the weekend, returning to qualify 12th with a 3.758. 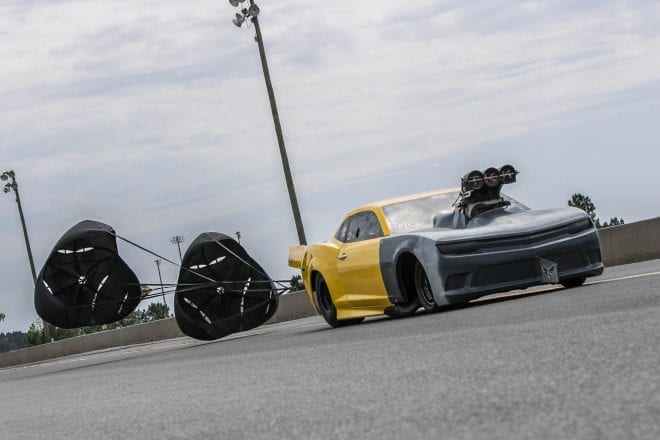 MILLER MAKES MIRACULOUS APPEARANCE: No, Jeff Miller didn’t qualify in the top 16, but just making the event was a feat in itself. Just a week after crashing into the wall at a race, Miller was in Valdosta, racing the Bumblebee to a career-best 3.81. How it happened made Miller one of the biggest success stories of the weekend, as the team worked around the clock to get the car back together, with Nick Stephens making a 2,000-mile round trip for a front cap. To then run a career-best just 17 hours after the car was ready, you couldn’t help but have a smile on your face. This was one more definite feel-good moment in a weekend filled with them.