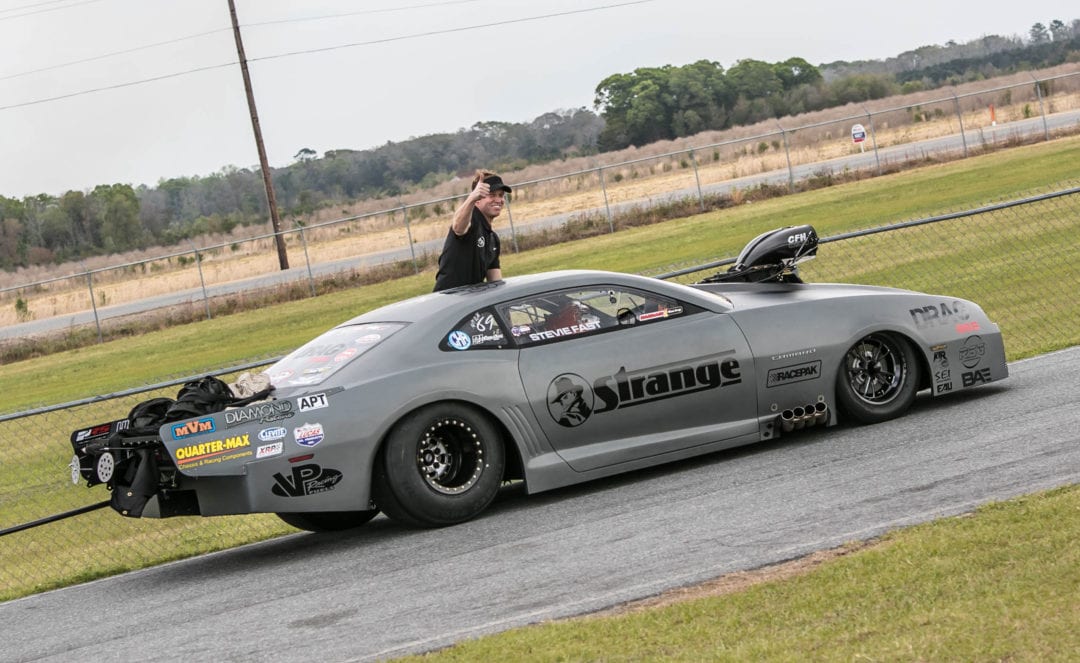 Stevie “Fast” Jackson was set to take his Camaro to the staging line, hone his raceday tune-up and run a solid 3.70 during a Friday qualifying session at Donald Long’s Radial vs. The World $101,000 to win Sweet 16 event.

A young child – and a huge Stevie “Fast” fan – quickly changed all that. He excitedly gave Jackson a high-five and implored the radial standout to go try and set the class record instead of making a conservative pass. It was all Jackson needed to hear.

The Lights Out 9 winner followed with a blistering 3.666 at 202.58 mph, momentarily setting the Radial vs. The World record before Mark Micke took it back later in the day.

When Jackson returned to the pit, the young fan was thrilled.

“He was so fired up, jumping up and down about that,” Jackson said. “You can’t get (any) better than that.”

The remarkable pass puts Jackson on a good track heading into Saturday’s eliminations and there’s no doubt the popular driver is ready. He is qualified third with his impressive 3.666 run and, following the Lights Out 9 win, is ready to keep his hot streak going.

The added magnitude and spotlight of the Sweet 16 event also seems to bring out the best in Jackson.

“I love it,” Jackson said. “It’s is the most fun part of racing I do, when it’s all on the line, when you have a good car in the other lane. When you condense my whole life of racing, it’s to get to that moment. I like to run for big money. It’s fun. Not only does it make it fun for the fans, but you can sure make someone’s leg shake over there if you run for a lot of money.”

The winner take all pressure is just fine with Jackson, who revels in these types of moments. He’s proven that throughout his successful career, whether it’s grudge racing, radial racing or in his Pro Mod car.

The class of racing doesn’t matter, but the winner take all aspect of it might be his favorite style, in part because of the mindset he brings to the table.

“I’m constantly applying pressure,” Jackson said. “You have to let them know you can do something they can’t do. That’s how races are won. Can you do it right now? That’s why I like grudge racing because it’s what can you do right now.”

Jackson’s talent for excelling in high-pressure racing is a nod to what he calls “nerves of steel” in the car, but the confidence also comes from the immense work Jackson and his team put in.

He is constantly working on improvements, leaving no stone unturned. That aspect gives Jackson as big a thrill as racing, and it will be needed on Saturday. It all brings a smile to Jackson’s face, knowing he has full confidence in what his team can do when it matters most.

“I structure my team around loyalty,” Jackson said. “All of my guys on my team are good people first. I’ve always chosen that over talent. What I have now is a good group of guys, and we have talent. Anybody on my team can do anything on my race car. Having a well-prepared race car is a leg up on anybody.”