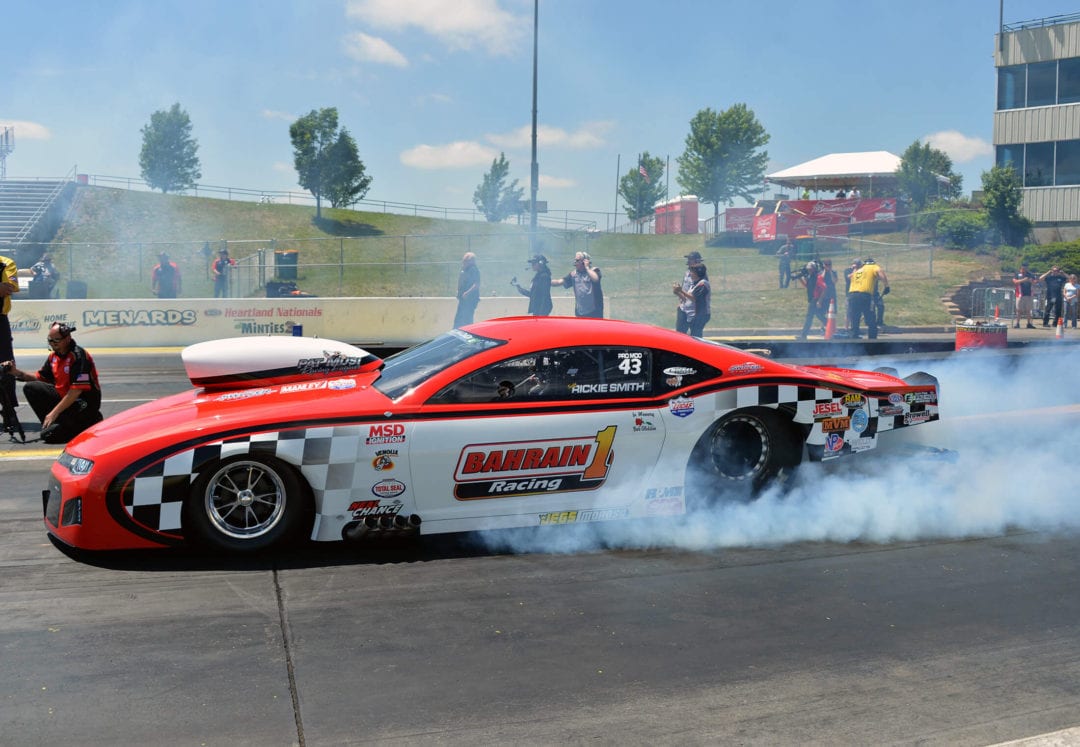 Rickie Smith already has two NHRA Pro Mod victories this season, taking a commanding points lead while he goes for a fourth world championship in the class.

The longtime standout is also about to receive an invitation to the biggest and richest Pro Mod race in the history of the known universe.

Drag Illustrated Founder and Editorial Director Wes Buck confirmed that he is headed to Virginia Motorsports Park this weekend for the NHRA Pro Mod race to officially hand Smith his invitation to the DRAG ILLUSTRATED World Series of Pro Mod, which takes place Aug. 10-11 at Bandimere Speedway.

“Yes, absolutely, I’m going to Richmond with an invitation in hand and I sincerely hope Rickie will accept,” Buck said. “When it comes to doorslammer racing, I believe Rickie is the greatest of all time. When you consider his sustained success, the sheer volume of accomplishments in different cars and different series around the world, when it comes to fast doorslammers, he’s the greatest of all time and we would love to have him there.”

Offering a $100,000 winner-take-all prize, the WSOPM delivers a serious incentive to a wildly-successful driver like Smith, who has 13 career NHRA Pro Mod wins and would join a loaded field at the 2018 race should he accept the invitation.

Racing in the high altitude on “Thunder Mountain” provides a considerable challenge for each of the engine and power adder combinations contested in Pro Mod, including nitrous-powered doorslammers, which Smith has campaigned for years.

There wasn’t a nitrous car at the inaugural WSOPM race a year ago, but with the NHRA Pro Mod class now allowing lock-up converters in nitrous cars, Buck believes that has helped level the playing field when it comes to a nitrous car running well at a mile high.

“We extended an invite in 2017 and we’ve wanted Rickie to be involved with the race badly,” Buck said. “We understood he has some concerns with being competitive at altitude, but with NHRA Pro Mod allowing the lock-up converter, I believe that has closed the gap. Based on our beliefs and some of the high-level people we’ve talked to, Rickie would be a threat on ‘Thunder Mountain’ – every bit as competitive as anyone else.”

That factor and Smith’s presence alone would add another juicy storyline in a race chocked full of exciting Pro Mod angles.

Seeing Smith try to conquer “Thunder Mountain” and defeat a host of Pro Mod stars, including defending WSOPM champion Mike Bowman, is a thrilling prospect, and one Buck hopes can turn into reality.

“To have the biggest Pro Mod drag race in the world, Rickie needs to be there,” Buck said. “For the guys who have accepted their invitations, Rickie is the type of guy they want to beat – he’s the caliber of racer they expect to have to get past in order to win the greatest spectacle in drag racing. He’s the type of guy we want at this race. He’s a big, bold personality and a world championship-caliber racer. He’s exactly the type of person drag racing needs and, most assuredly, he’s a guy who draws fans.”