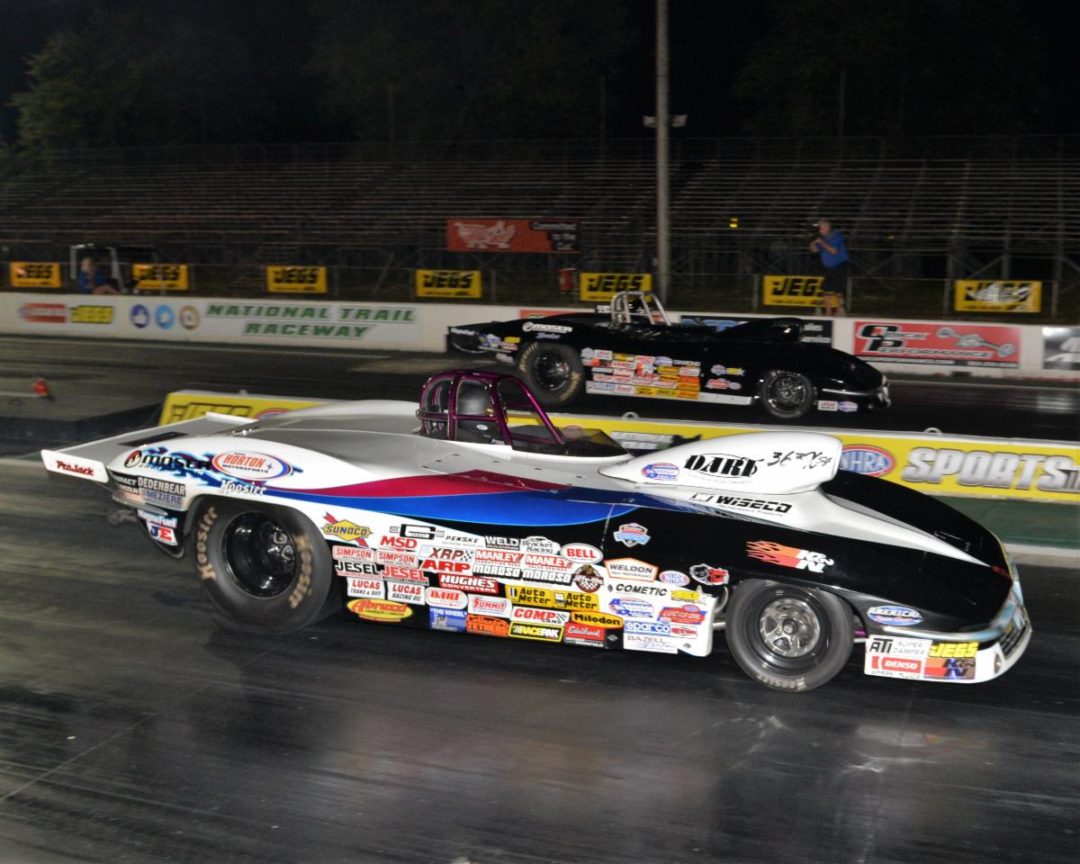 Ray Connolly and Devin Isenhower, a pair of former NHRA world champions, displayed their talents Saturday at the JEGS SPORTSnationals at National Trail Raceway with victories in the special K&N Super Shootout races. Connolly won the Super Gas class while Isenhower earned the Super Comp title. They were joined in the winner’s circle by Paul Brown, who earned the Super Shootout title in Super Street.

Isenhower, the reigning Super Gas champion, turned his attention to Super Comp this year and emerged with a victory with an 8.93 to 8.91 holeshot win over Chuck Ridenhour in the final round.

Connolly earned the win in Super Gas in his ’63 Corvette when he drove past Mike Jirousek in the final, 9.93 to a 9.88. Both drivers were driving ’63 Corvette roadsters.

Brown drove his Dodge Dart to the Super Street title with a close 10.867 to 10.860 win over Brandon Dutton. The Super Shootout events were open to the top eight qualifiers in each of the NHRA “Super Class” categories.

In the Racing RVs Fast Four final rounds, Danny Nelson and Lester Johnson earned wins in Top Dragster and Top Sportsman, respectively. Nelson drove his dragster past JB Strassweg with a 6.21-second elapsed time. Earlier in the day, Nelson surrendered the No. 1 qualifying spot in Top Dragster to Al Peavler, who ran a 6.111.

Johnson drove his popular ’55 Chevy to a 6.14 elapsed time in the Top Sportsman final to hold off Jeff Brooks, who slowed to a 10.41 in the final. Johnson also managed to hold on to the top spot in Top Sportsman qualifying with a 6.121-second elapsed time.

The final round of the C-Tech Fast Four for Comp racers was to feature Brian Browell and Chad Voges, but with racing extending late into the evening, they elected not to run and split the purse. Browell did manage to take the top qualifying spot in Comp after driving his six-cylinder dragster to a 7.200 (-.640) run earlier in the day.