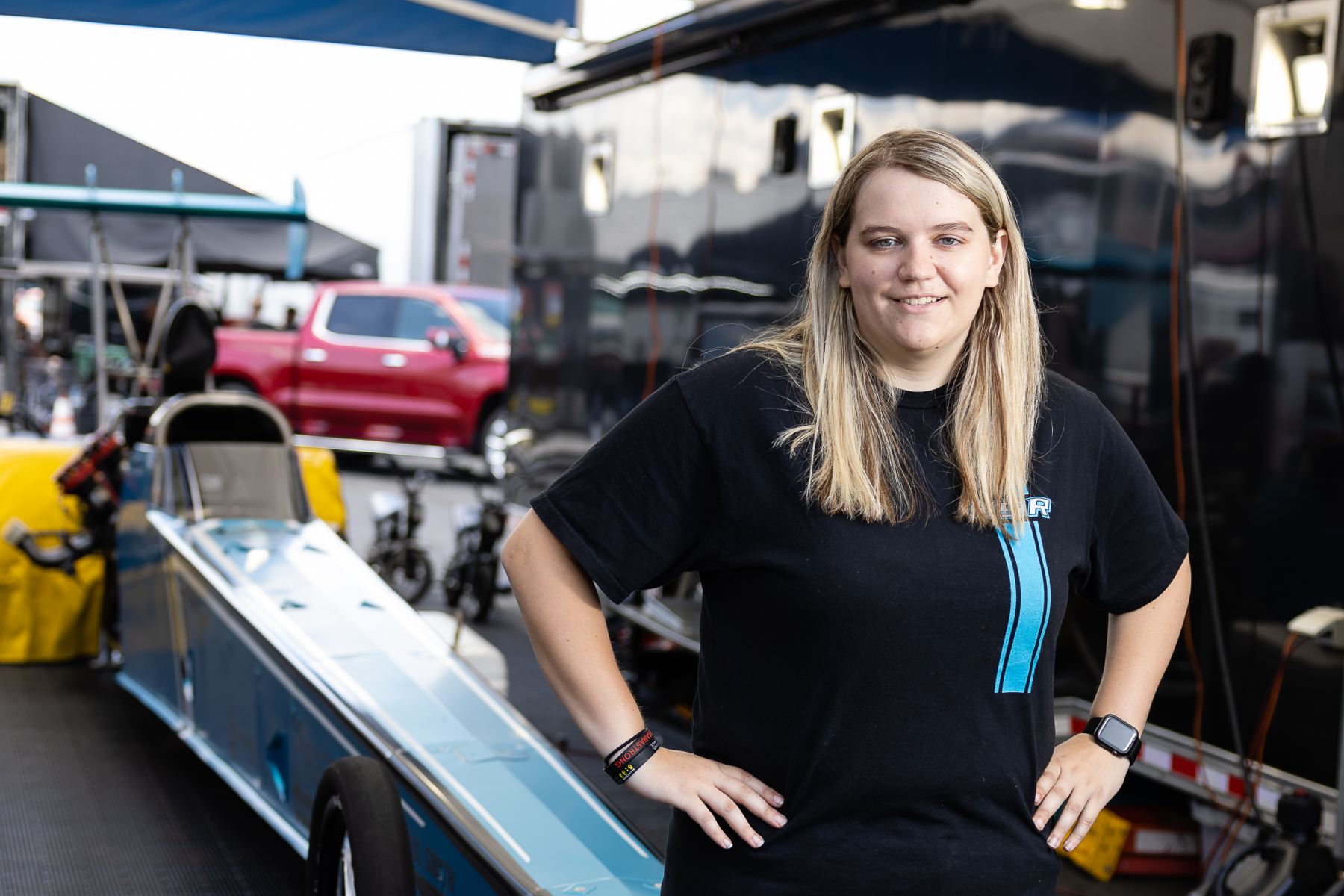 It was all but inevitable that Megan Smith would end up behind the wheel of a nitro-burning race car. Both of her grandfathers, Virgil Hartman and Paul Smith, have been involved in nitro racing since the 1970s. Her parents, John “Bodie” Smith and Rhonda Hartman-Smith, raced against each other in NHRA Top Fuel competition in the early 2000s while Megan was just a toddler.

Now a 22-year-old recent college graduate, Megan is getting her own opportunity to burn nitro. She earned her Top Alcohol Dragster license earlier this season and has run two NHRA national events in the Hartman Smith Racing A/Fuel dragster.

Having grown up around the sport, Smith paid attention to all the procedures, but nothing compares to actually getting in the seat and driving.

“I knew driving the A/Fuel car was going to be a big step up in speed, but I was surprised by how hard it pulls at the top end,” Smith admits. “During my license runs, it was sluggish on the takeoff but after half-track it just kept pulling to 267 mph. Even my dad, who tunes the car, was surprised how much it picked up at the top end because he’s used to the Top Fuel cars launching hard and almost launching again when the clutch comes in, and I think that’s what I was expecting as a driver.”

The collective knowledge and experience of Smith’s mentors in the HSR pit have made the move up to A/Fuel fairly smooth for the former Jr. Dragster driver. Megan’s dad still drives and tunes nitro Funny Cars, as does her uncle, Mike Smith. Both her grandfathers are also heavily involved in the operation.

“It’s pretty awesome to have so many people in my family that I can go to for advice,” says Smith, who is also joined by her younger brother, Dylan, on the team. “Not many people can go to their mom and ask about shutdown areas at different tracks and trying to slow down a 260-plus mph dragster.”

Even Smith’s car has a long history in the sport. It was formerly a Top Fuel car used by grandpa Paul as a “school car” as he trained upstart drivers like Clay Millican in the early 2000s. “Big Daddy” Don Garlits also drove the car in competition at one time.

Smith is focused on making her own history in the car now, though. She hopes to start running consistently in the 5.30s by the end of the year. The plan is to run a handful of races this season while hopefully attracting sponsors to help expand to a full schedule in the next few years. Smith’s longterm goal is to move up to Top Fuel someday.

“Another goal I have is to get my mom back behind the wheel either in the A/Fuel car or a Top Fueler,” Smith says. “I know she misses it, and it’s a dream of mine to race against her. How awesome would it be to have a mother-daughter team on tour?”

Smith admits 2021 is a learning year for the team, as everyone involved is new to the nuances of injected nitro cars. But she’s enjoying the process, especially since it involves racing as a family.

“It’s pretty funny to watch nitro whizzes like my grandfathers be dumbfounded by these A/Fuel cars,” Smith says. “They both joke with me that it would be easier to put a blower on it and just go Top Fuel racing – you won’t see me arguing with them!”