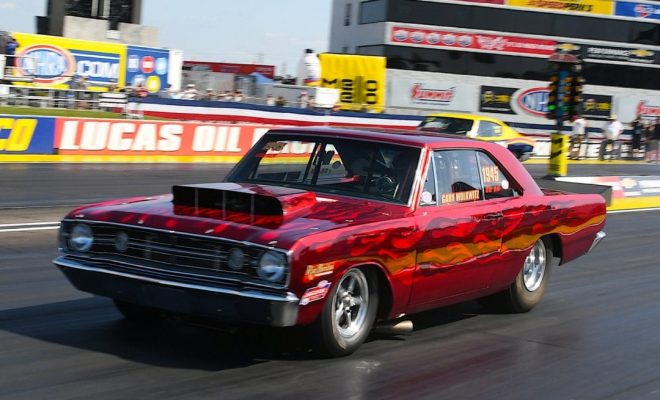 Gary Wolkwitz raced his Super Stock 1968 Dodge Dart to the top spot during qualifying for the NHRA Dodge HEMI® Challenge, the popular race-within-a-race held during the NHRA U.S. Nationals, August 29 – September 3. Wolkwitz will start from the pole for the second consecutive year as he seeks his first career win at the Lucas Oil Raceway at Indianapolis facility.

The event, now in its 18th season, comes during the 50th anniversary celebration of the Mopar-powered 1968 Dodge Dart and Plymouth Barracuda Super Stock cars that compete in the fan-favorite event. The iconic 42.6-lb NHRA Dodge HEMI Challenge trophy and $15,000 winner’s purse will be on the line tomorrow during eliminations. All drivers finishing in the top 16 will receive cash rewards.

“It didn’t do me much good last year,” said New Jersey native Wolkwitz of his No. 1 position, which he nailed down with a 8.524-second elapsed time (ET) in the final qualifying session. “Let’s hope this year is a little bit different. It would be terrific (to claim the win). I turn 73 in October, and this might be my swan song.”

Jimmy Daniels, the two-time and defending event champion, nabbed the No. 2 slot with a strong 8.538 run, earning his same starting position as last year. The 22-year-old dental student from Pennsylvania is hoping to put his imprint in the NHRA Dodge HEMI Challenge record books by becoming the first driver to claim victory in the event at Indy three years in a row.

“We’re trying hard (for the win),” said Daniels, whose father and namesake is also a past HEMI Challenge winner. “We’ve still got some work ahead of us. This is my first pass since the NHRA Dutch Classic last October, so it’s been awhile. But we’re working on it. The car likes being in the No. 2 spot, and Gary’s No. 1. It’s good to have the Barton (Racing) cars in the one and two spots. We’re feeling good for tomorrow.” 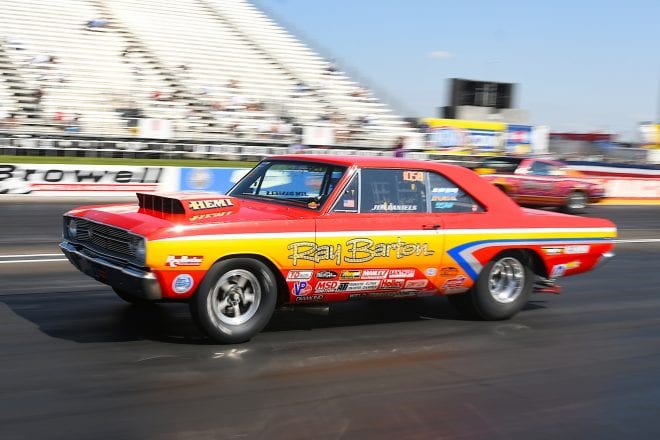 A parade of HEMI Challenge cars will take place Friday, August 31, before eliminations commence, with the final round to crown the 2018 champion scheduled for prime time on Friday night, just prior to NHRA Nitro qualifying.