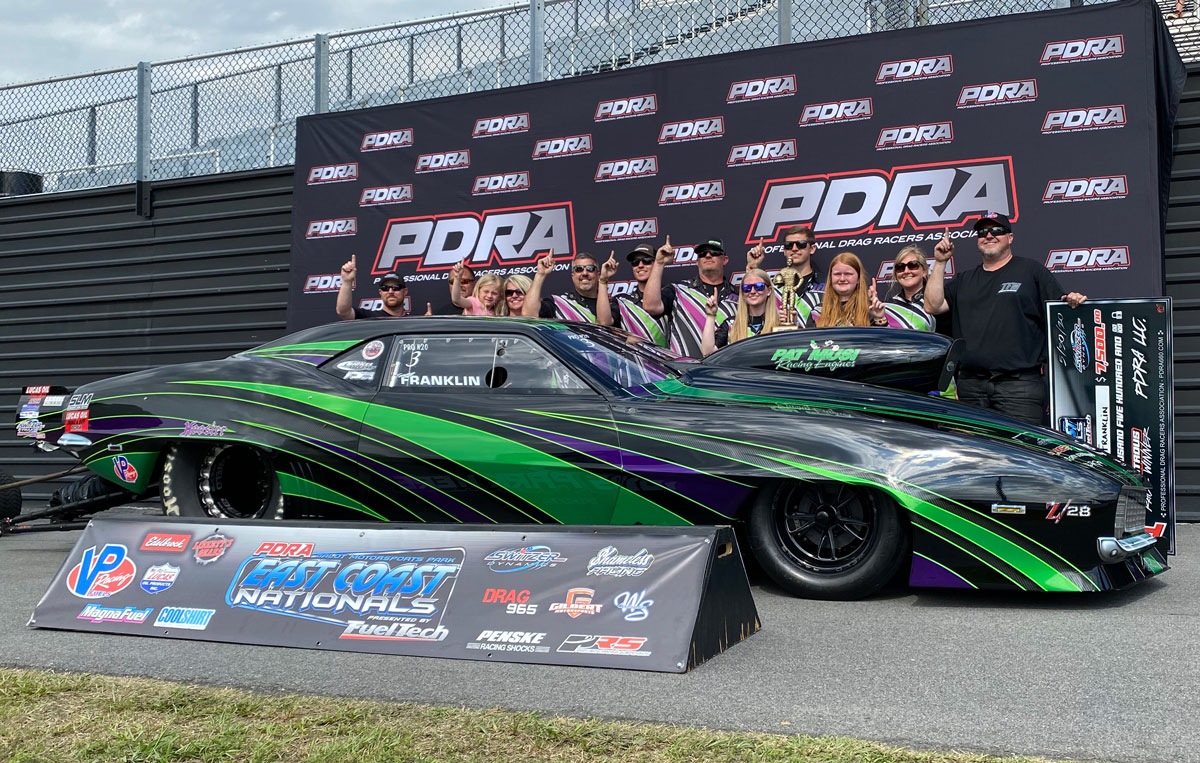 Through varying weather conditions and a loaded Pro Nitrous field, Pat Musi Racing Engines customer Tommy Franklin was consistently good in all areas, rolling to the victory on Sunday as the Professional Drag Racers Association (PDRA) kicked off its 2020 season with the East Coast Nationals at GALOT Motorsports Park in Benson, NC.

From qualifying second in his “Jungle Rat” ’69 Camaro to putting together four straight runs in the 3.60s in eliminations, Franklin used Musi power to dominate race day. He ran 3.687-seconds at 205.51 mph in the final round to pick up the victory.

“It’s been a crazy year for everybody already. My team is awesome and they don’t stop working,” Franklin said. “We definitely had challenges, but from a race car standpoint, we have an awesome combination with that Pat Musi horsepower. The car was flawless all weekend and we just put it together and made some really solid runs.”

The start of the season was delayed two months due to the COVID-19 pandemic, but Franklin and his team were locked in at GALOT. They had a strong test session at the track the Franklin family owns, Virginia Motorsports Park, and carried that momentum into the PDRA opener.

“Tommy and his team were definitely on their game this weekend and they performed at a high level,” Pat Musi said. “His team put up big numbers and they were consistently going down the track, and that’s what you need to do to be successful. We’re constantly trying to develop our engines to ensure they’re capable of strong performance in all conditions, and it’s great to see a customer have a weekend like this.”

Franklin has long praised the versatility of his fuel-injected, nitrous-breathing Pat Musi engine, noting its ability to put up big numbers no matter the weather conditions. That was evident at GALOT, as teams battled rain and a wide variance of atmospheric conditions all weekend. Franklin, though, was consistent throughout, which made the difference in the talent-filled class.

“We got some curveballs thrown at us, but our team worked well and made the adjustments we needed,” Franklin said. “We made three solid runs (on Sunday) and a good one (on Saturday). There’s stiff competition and everybody out here is tough. To come out here and beat them, it’s a feat of its own.”

In addition to Franklin’s win, Buddy Perkinson also scored a runner-up finish in Elite Top Sportsman and Wes Distefano was runner-up in Pro Outlaw 632, each with Musi engines under the hood. After qualifying in the No. 12 position, fellow Musi-powered Pro Nitrous star Lizzy Musi suffered a first-round loss to open up her 2020 PDRA season in Pro Nitrous. She’ll look to rebound and Franklin will aim for a second straight win when the PDRA returns to action June 11-13 at Darlington Dragway for the PDRA Carolina Showdown.