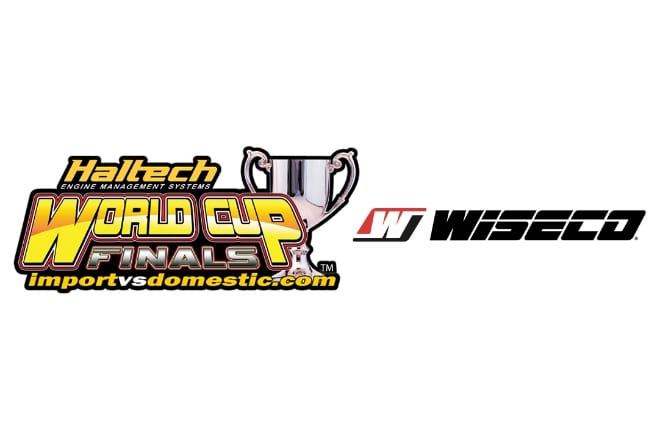 Beginning in 2019, the event, which takes place in the shadow of the nation’s capital in Mechanicsville, Md., will officially be known as the Haltech World Cup Finals Presented by Wiseco.

The five-day, drag racing showcase features import versus domestic drag racing, a custom car show and manufacturer’s midway. This year’s World Cup Finals is expected to draw close to 400 domestic and international heads-up racers who will compete for over $110,000 in 10 separate classes of competition.

Wiseco representatives will be on site to offer technical expertise while supporting racers and discussing products with fans and competitors, alike.

“Drag racing is a core focus for Wiseco and being able to support our domestic and sport compact racers in one place was a natural fit for us,” explained Mark Gearhart, Director of Content for Wiseco Performance Parts. “The Haltech World Cup Finals brings together a huge number of both domestic and import racers, so this is a great opportunity to showcase Wiseco in front of a core group of customers and make new friends. Jason Miller and his team put on a great event, so we’re excited to integrate Wiseco into the World Cup Finals.”

The racing promises door-to-door action from practically every class of drag racing and will feature the top cars from nearly every sanctioning body in the country. The pit area provides the backdrop for a custom car show with trophies and cash prizes awarded where beautiful cruisers, classics, hot rods, tuners, low riders, and exotics will all be on display.

“Wiseco Pistons has stepped up their level of support at WCF in a huge way by signing a new contract starting in 2019 as our new presenting sponsor. Next year the event will be named the Haltech World Cup Finals presented by Wiseco. The truth is, I grew up racing dirt bikes and Wiseco pistons were in every one of my bikes. Now, I choose Wiseco pistons for my eight-second Shelby. Having a great company like Wiseco join Haltech along with all of our other great sponsors at WCF is a surreal moment for me. My brother and I and the rest of the Miller Brothers Productions team look forward to having a long relationship with Wiseco at WCF.”

Tickets for the 2018 Haltech World Cup Finals will be available at the gate and online, beginning September 10, at importvsdomestic.com. The event will also be live streamed in HD at Speedvideo.com.