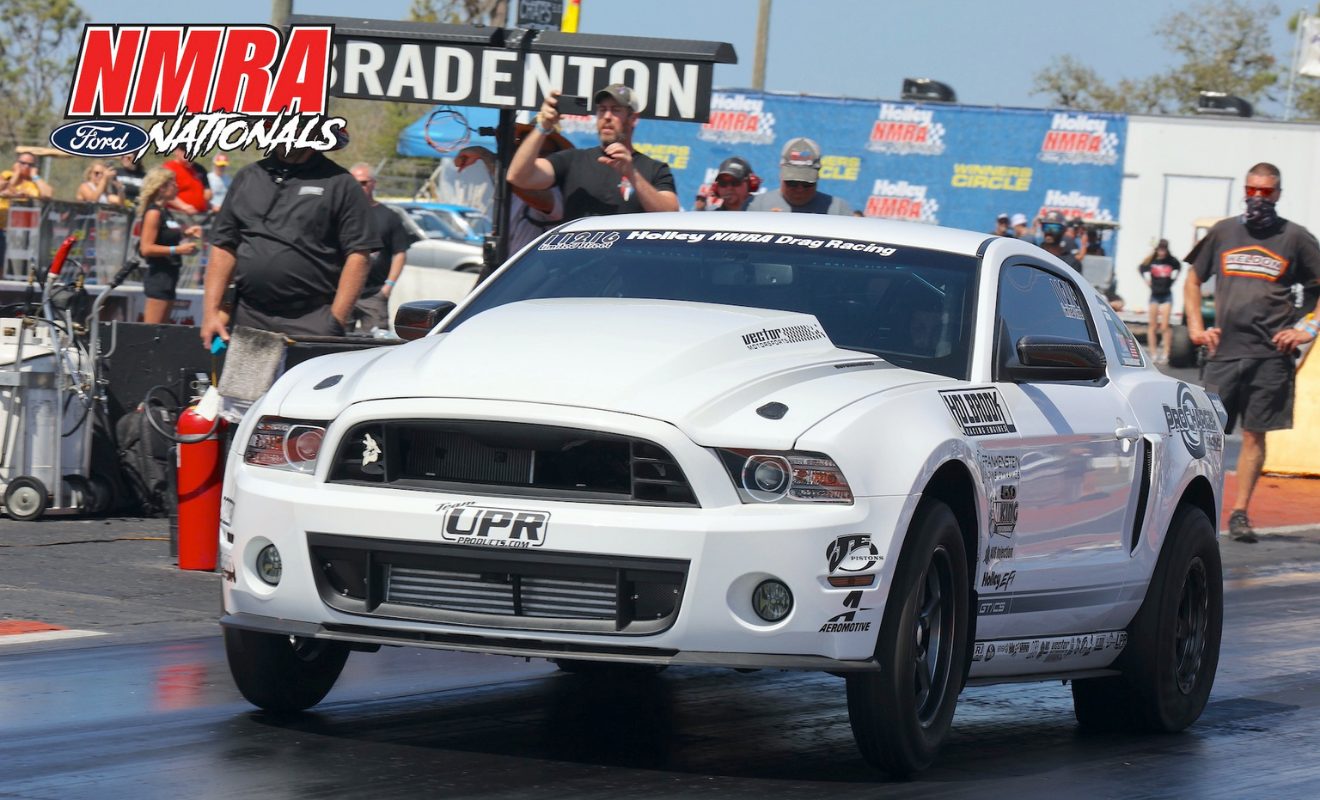 The event was gifted not only with wicked performances from some of the fastest Ford-powered machines on the planet, but also beautiful weather and an abundance of sunshine. The perfect start to the racing season was punctuated by a race that suffered no major incidents or delays. This enabled racers to benefit from some downtime each evening to socialize and enjoy leisurely suppers.

Racers, fans, and spectators were all treated to a host of other exciting activities in addition to the on-track action. From the impressive UPR Products car show to the well-stocked swap meet, bustling vendor midway, and more attractions including the original Bigfoot 4×4 monster truck, it was the perfect way to end the monotony of the winter off-season.

NMRA VP Racing Madditives Renegade qualifying featured a tight and competitive field, but Kieffer Simpson topped the order after his turbocharged 2013 Mustang produced an eighth-mile run of 4.554-seconds at 158.45 mph. Hot on his heels in second with a 4.560 at 156.63 mph run was back-to-back class champion, Joel Greathouse, in his KBX Performance-backed and Harts turbocharged Fox Mustang. Greathouse’s team had to repair an injury to the Bennett Racing Engine’s valvetrain on Saturday, but the bullet was buttoned up well before the start of eliminations. As expected, Simpson and Greathouse met in the final, but Greathouse carried the lead from start to stripe and his 4.554 at 155.81 mph shot scored a home run win while Simpson cruised to the runner-up finish.

Co-owner of Vector Motorsports in Michigan, Samantha Moore qualified number one in JDM Engineering Limited Street with her 8.151 at 168.66 mph trip. It was a déjà vu from last year’s race as Moore went on to win round after round of eliminations with her 2014 Mustang California Special. On Sunday afternoon, she stared down the number-two qualifier, Stacey Roby, in the all-ProCharger finals before she went on to nearly duplicate her qualifying time with an 8.151 at 169.08 mph trip. Roby, however, left the line four-thousandths of a second too soon and gifted the win to Moore.

The first running of the new SunCoast Performance 8.60 Street Race category saw William Lujan claim the number-one spot in qualifying with an 8.605 at 158.93 mph hit from his 1990 Mustang but it was the number-five qualifier, Jeff Bloem, who took home the Victor award as the winner in an unusual finish. Bloem, who made the trip to the Sunshine State with his 1991 Ford Mustang from his home in Canada, clicked off a cool 8.626 at 161.88 mph pass and would have been the runner-up as he had a foul start if not for what went down in the opposing lane… Randy Thomas ran too quick for his 2010 Mustang GT500’s roll cage certification — and class rules — with an 8.483 at 160.59 mph and his potential win was disqualified and downgraded to a runner-up finish instead, so Bloem was reinstated as the winner.

The high-flyin’ G-Force Racing Transmissions Coyote Stock circus saw a nearly all-9-second qualifying field, but it was Charlie Booze Jr. in Scott Milhimes’s 1990 Ford Mustang who held the lead with a 9.689 at 137.39 mph qualifying pass. Booze banged the gears through to the finals where Randy Soper, who qualified second in his 2004 Mustang Mach 1, put a stop to Booze’s progress. Although Booze had a hundredth of a second head start on the tree and a strong 9.764 at 134.04 mph, the always smilin’ Soper delivered a knock-out blow with a 9.737 at 137.12 mph and picked up some shiny new hardware to place on his mantle in Michigan as a result.

Taking the top honors in Richmond Gear Factory Stock qualifying was Mike Bowen, as the racer ran his Gen 1 Coyote-powered 1971 Ford Maverick out to an impressive 10.101 at 133.66 mph performance. Bowen, who hails from Pennsylvania, won a first-class ticket to the final round where he faced off against his tuning client and the number-two qualifier, Chris Niebauer. Niebauer had the advantage at the start with his 1985 Mustang GT, but Bowen drove around him to reclaim the lead and lit the scoreboards with a winning 10.110 at 132.50 mph trip. 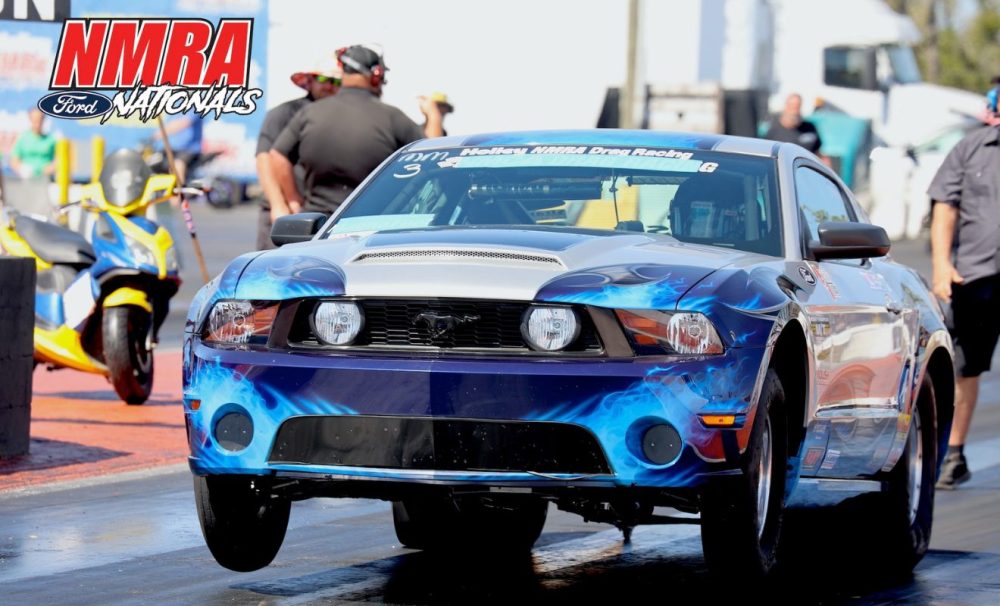 A large Exedy Racing Clutch Modular Muscle group in qualifying was topped by Susan McClenaghan, as the seasoned racer’s 0.001-second reaction time in her 2010 Mustang was the quickest of all. Putting her expertise to work in eliminations, Michigan’s McClenaghan suppressed each racer who dared line up against her, including Matt Harget who red-lighted in the final round. Her perfect weekend was capped off with a 9.401 at 145.39 mph jaunt on her 9.39 dial-in and another win to add to her already impressive résumé.

Nailing a perfect 0.000-second reaction time in his 2015 Ford Mustang GT, Dale Aldridge was the number-one qualified HP Tuners Super Stang racer. The ultimate glory, however, went to hometown hero — and 2021 season champion — Chris Parisi with his heavily sponsored 2020 Ford Mustang. Coming off his number-six qualifying performance, Parisi translated his position into the winner’s circle when he dispatched Matt Johnson in the final round with a 12.007 at 93.79 mph run on an 11.88-second dial-in to Johnson’s 12.139 at 116.13 mph pass on an 11.96 dial.

With a quick 0.002-second reaction time in qualifying, AJ Williams drove his 2004 Ford Mustang to the top of the list in ARP Open Comp. Williams held on to round three, but the final round was occupied by the 14th and 15th qualifiers, William Jones and Mel White, respectively. Both Jones and White hail from Nashville, Georgia, and each fields a classic 1960s-era Ford. The two were staged, but White left the line just 0.002 seconds too soon and defaulted the win light to Jones’s lane as he cruised through the traps with his 1968 Falcon to punctuate the win with a 9.348 at 144.40 mph run on his 9.31-second dial-in.

Former class champion Bob Dill climbed back on top with his 2001 Ford F150 after Detroit Locker Truck & Lightning wrapped up, as his 0.002-second reaction time meant he was the number one qualified driver. Dill destroyed the field in eliminations and maintained his momentum throughout Sunday’s action. Taking down three other drivers, Dill staged with Johnny Lightning in the finals. Both ran over their mid-8-second dial-ins, but Dill had the winning package, and his 8.916 at 140.53 mph pass ensured that his drive back home to Pennsylvania would be a good one.

An impressive 132 car-and-driver pairs pushed for street-legal glory in TorqStorm Superchargers True Street. After completing the traditional 30-mile cruise, grocery getters and all-out performance machines took to the track to make three back-to-back hits. On Saturday evening, the overall win was claimed by New Jersey native Mike Jovanis, whose turbocharged 1989 Ford Mustang averaged 7.890 seconds across three runs – the only entry to break into the 7-second zone. In second was Larry Albright, as his 1991 Mustang averaged 8.230-seconds. Adam Kuffel won the 9-second category on an average of 9.071-seconds, and Art Kalbhenn was the winner in the large 10-second group with his 10.052-second average. Other winners included Tom Barrett (11-second), Dale Aldridge (12-second), AJ Williams (13-second), William Papaleo (14-second), and Daniel Augustine (15-second).

On Sunday, the BBK Performance Spring Break Shootout hosted the quickest 16 cars from TorqStorm Superchargers True Street for an all-out, heads-up eliminator on a Sportsman ladder and 4/10 pro tree. After dominating the competition in True Street, New Jersey’s Mike Jovanis repeated the feat with another commanding performance in eliminations as his 7-second 1989 Ford Mustang proved unbeatable. Turbocharged power propelled Jovanis through the traps in the final to close out his time in Florida with a 7.665 at 177.11 mph time slip while Randy Thomas collected the runner-up prize with an 8.469 at 160.56 mph blast.

The eight quickest manually shifted, street-legal Mustangs from TorqStorm Superchargers True Street final results were invited back to participate in the TREMEC Stick Shift Shootout category. All participants earned custom plaques and TREMEC jackets to commemorate their accomplishments before competing in a staggered start and no-breakout eliminator. The field was whittled down to Floridians Alex Martinez in his 1995 Mustang and Brian Biegert in his 2017 Mustang, and Martinez turned on the final round win light with a 10.051 at 111.31 mph pass on his 10.31 dial in while Biegert ran 11.687 at 115.38 mph on his 11.82 dial. Martinez received a McLeod RTX clutch while Biegert received a $500 gift certificate to McLeod, and both drivers were surprised with two tickets to the NASCAR Racing Experience courtesy of TREMEC and McLeod.

Sixty cars competed in Race Pages Bracket Open on Sunday through seven rounds of eliminations, including the finals. The last two men standing were Brad Gibbs from Canada and Todd Bowser from Florida in a Mustang versus F-150 final showdown, but the win went to Gibbs as he ran 5.342 at 123.72 mph in the eighth-mile on a 5.32 dial in and Bowser ran 7.856 at 86.18 mph on his 7.80 estimate.

All of the victors received Victor awards for their efforts and began accumulating crucial points to begin working towards year-end championship titles. Overall, it was a great start to the 2022 NMRA Holley Drag Racing season and the action will continue as the NMRA heads to Rockingham, North Carolina, for the 14th Annual Scoggin-Dickey Parts Center NMRA/NMCA All-Star Nationals presented by MAHLE Motorsport on April 22-24 at Rockingham Dragway. For more information and advance tickets, visit NMRAdigital.com.