In what driver Will Smith calls a “perfect day” the Smith/Hirata duo pulled out their first win together at the NHRA Lucas Oil Drag Racing Series regional event at Tri State Raceway this past weekend. Before teaming up, Smith and Hirata have each proven their winning capabilities, and over the last three years, they’ve come close multiple times, but the coveted Wally has somehow eluded them. That was, until now.

“After three years of ups and down, we finally got it done,” told an elated Smith. “It was everything I could dream of. I am so proud of the Hirata Militia! Unfortunately, not everyone could be here to celebrate this weekend, but this win is for all of us.”

Smith swept the weekend, qualifying #1 in the Hirata Motorsports Top Alcohol Dragster with a 5.36 effort in the only qualifying attempt weather allowed for. As the cards fell, Smith had to face reigning World Champion, Megan Meyer, first round. Smith’s .017 reaction time to Meyer’s .075 gave him a huge advantage right off the starting line. Meyer wouldn’t make it down the track, so Smith cruised to a win, setting the stage for the rest of the day.

“When I woke up that day, everything just felt right. Even the weather was perfect. After taking out Megan first round, I knew we could do it. This could be our day,” Smith storied.

It was a closer race in round two against Aaron Cooper, but once again Smith won on both ends of the race track. This set him up to face Dean Dubbin in the final round. “I knew I left on him, but I felt a cylinder go out about 900 feet. I was just hoping we could hang on. When I saw the light, I went numb.” 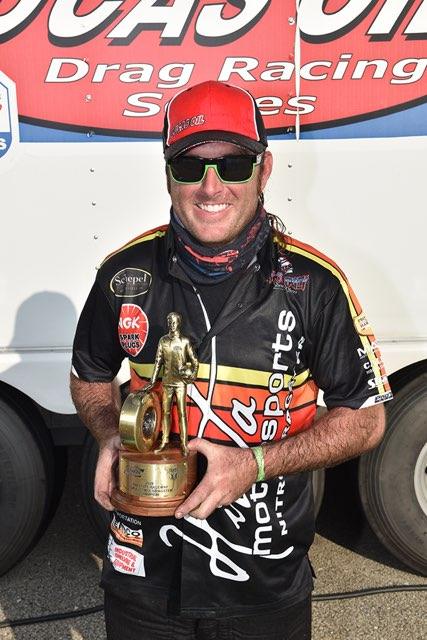 The celebrations and emotions hit him when Smith came out his dragster to a series of hugs and high fives. “I cannot thank Dave [Hirata] enough. He and his parents took a chance on me. I had never raced TAD before and he had a long winning history. Just to compete on this level is a dream come true. Winning is a huge bonus.

“We’ve known we can do this, and it finally came together. It was everything I dreamed of except for not having the whole team there. They all work so hard and needed this win. I can’t thank them enough. Dave, Kenny, Chiyo, Phil, Brian, ‘Wild Bill,’ Molly, Ashley Fye, ‘Generator Jim,’ Logan, Mom and Dad – you are the best team anyone could ask for.

“Congratulations and special shout out to our marketing partners. This win is as much theirs as it is ours. Lucas Oil, Protect the Harvest, NGK Spark Plugs, Schepel Buick/GMC/Cadillac, TeaCo Geophysical, 4G Transportation, Industrial Shelving & Equipment, Frederick Line-X, ProThings Apparel, Race Ugly Speed Shop, R&R Connecting Rods and Strange Engineering – thank you all! We wouldn’t be here without you.

“I thank God every day for the opportunity to be a part of this team and drive for them! He’s blessed me far beyond what I deserve.”

The congratulatory calls, texts and posts keep coming in as news of this initial win spreads. “It’s been overwhelming,” Smith continued. “There are so many great people who support us and have reached out to congratulate us. It’s humbling.”

Although it was a long time coming, the ingredients that made up this win have already been long in place for the team, so this could likely be the first of many wins.

“This team is rock stars. We’ve come close so many times. It feels incredible to get this first win together. Racing with these people, who are like family to me, and to represent amazing companies and to have fun doing it all is a dream come true. I can’t wait to see where we go from here.”