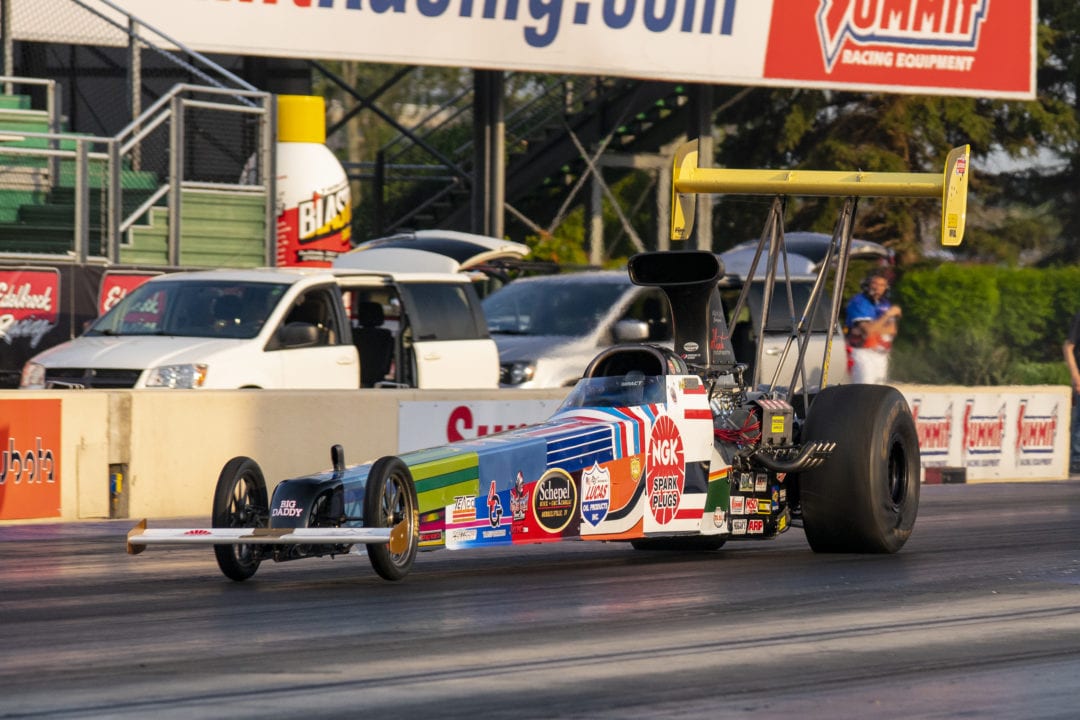 At the most recent NHRA Division 3 event, the Cavalcade of Stars at Summit Racing Equipment Motorsports Park, Will Smith and Hirata Motorsports earned their way to their first final round appearance together.

This team is making people take notice on all fronts. It’s a throwback season with celebrated mullet hairstyles and a tribute dragster that pays homage to great names in Top Fuel through the years. While the wow factor of this year’s team image was enough for people to take notice, Smith and Hirata wasted no time in making sure their on-track performance didn’t take second place.

“What a difference a year has made,” Smith began. “Last year at this event we made our debut. We weren’t even really sure who our crew was going to be for the remainder of the year. We DNQ-ed. We were behind the eight ball. We worked hard all last season and throughout the off season. I think our performance this past weekend showed that.

“The new combination we’ve been working on over the winter is really showing a lot of promise. We’re starting to get to where we need to be. We’ve got a combination and tune up, and we’re gaining more confidence. Now it’s just a matter of getting more laps with it and establishing some consistency.”

Smith has gained a reputation of a quick leaver, and his reaction time often helps turn on the win light. His worst light all weekend was a .035.

“There are a lot of variables in racing. To be really good you gotta eliminate as many variables as possible. If I can do my part and remain consistent, we’ll have more opportunities. I feel like I settled into that last year and this season picked right back up where I left off.”

The Hirata Motorsports dragster caught some attention when it carried the front wheels all the way to the eighth-mile during the first qualifying run. “It picked up the front end a little bit and then eased back on the wheelie bar and I thought well, it’s going straight,” Smith storied. “It was running hard. It was accelerating like it never had before. I wanted to run it out. It got to about the eighth-mile, and I felt it come up on the wheelie bar a little more, so I had to back off. I got back in it to keep us in the field. It would have been an incredible run if I hadn’t had to pedal it down.

The team won first round on a hole shot, but suffered major parts failure. “We stayed up until 3:30 Sunday morning putting a new motor in. We worked for this one. Plus, the wheelie caused a little front end damage so we had to do some welding. Our entire team worked incredibly hard this weekend. The dedication and persistence of this team is what got us to the final round. We fell a little short in the final, but we’ve got nothing to hang our head about. We were tickled to death.

“We had a good outing for our new sponsors. We’re looking to build on that. It was a big confidence booster for everybody involved. We’re really looking forward to next week.”

The new paint scheme featuring panels from famous dragsters throughout history kept people talking throughout the weekend. “People are having fun trying to figure out all of them. It’s like a game. For me, to love drag racing the way that I do and appreciate the history of our sport, it’s truly an honor to drive this car. There’s so much history represented in each of those panels. It’s humbling and incredible to sit back and think about. To do something like that that’s never been done before – it’s got that wow factor.”

Smith and Hirata are hoping to continue turning heads throughout the season and keep their win record growing along with the mullets.

“We’re feeling good heading into Chicago next week for the national event. Dave’s always run well there. That was our best race last year and we’re hoping to improve on it.”