You could tell all weekend that this meant something extra for Jason Line.

From the time he qualified No. 1, there was a sense that this could be special.

He didn’t reveal too much – it is the reserved, business as usual Line we’re talking about, after all – but the anxious “I just might win this” feel was definitely prevalent in Brainerd.

And this may just sum up why Brainerd means so much – to Line, to fans and anyone who loves to be part of something fun and memorable.

Sure, Line had won Brainerd before, but he had never won “at” Brainerd in Pro Stock and that’s what meant everything.

For Line it traces back to basically growing up at the track.

His dad raced the very first race at the facility in 1968 and Line cut his teeth racing there.

It had decades of meaning for him, showing just how special it is to win at your home track. 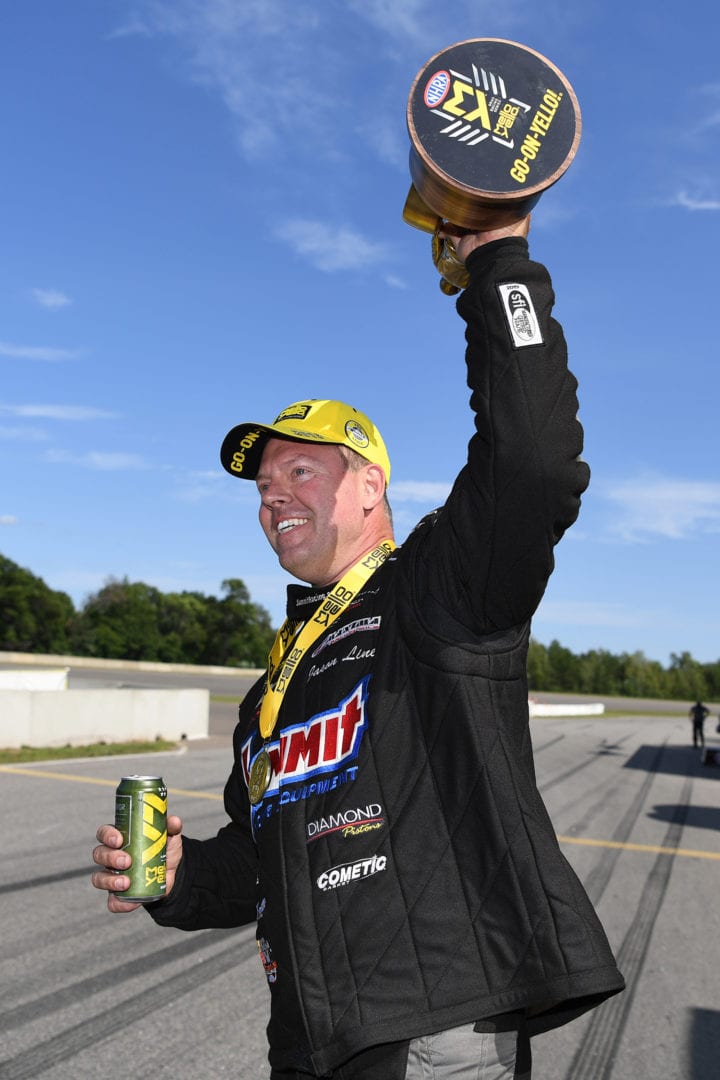 But what if Line had not grown up a little over an hour from the famed Brainerd International Raceway? If he had won a home race at another track, would it have been as special?

Based on what I saw last weekend, and based on the legend that is everything surrounding that track, my guess is no.

Which is what makes this weekend so great.

There’s lots of racers who have a home track race – that’s how they got started. Many of them return each year hoping to win at their home track, and if it happens it’s special, there’s no doubt.

But Jason Line winning at Brainerd just seemed a little extra special, or at least it did last weekend.

Perhaps it’s because he had waited so long for it. That certainly plays into the equation. But even for Line, you could tell there was just something more with this one.

“My parents let us come here when we were just kids. It was the start of something big for me,” Line said. “I won my first race here. My first lap was here. My first beer was probably here. My first memories (of racing) were of coming here. It is a great place. No matter what, this place will hold fond memories for me.”

Line said “it is a great place,” and I can’t stop thinking that has so much to do with this.

Simply put, this race is a scene. On a schedule filled with 24 races, this one absolutely stands out. Why? Well, “The Zoo” certainly helps.

The rollicking party is must-see entertainment that can’t be missed by the thousands who make this an annual appointment on their schedule.

There’s Capps Corner – and you’ll get plenty out of Ron Capps talking about why Brainerd just feels a bit different, in a good way – there’s jet cars lighting wood pallets on fire, there’s bathtub cars and everything else you might imagine.

But there’s also unbelievable support in the wildest of places. There’s fans down by the weigh station. There’s fans in every nook and cranny up and down the track, greeting racers with enthusiasm, treating them like rock stars.

That doesn’t go unnoticed. It’s a party that includes a drag race and that’s impossible to ignore.

“They did a great job with the track and to return up the return road on the zoo side with all of the fans yelling, that was really cool,” Line said.

That’s an aspect missing far too often in this sport.

There’s support – and there’s tons of it across the country – and then there’s Brainerd support, and there is a difference.

It’s what the track is known for and that identity runs deep.

Do other tracks, other races have identities? Sure, some do. But, unfortunately, not all of them. It’s something that would be great to change (and maybe take a lesson out of Brainerd’s book to start). Brainerd, though, does and it’s a strong one.

Brainerd will always have that and Line can wear it as a badge of honor. You can tell he does and you can tell the pride he takes in a track and a fanbase that care so much about this sport and this particular race.

It had eaten at him for so long that he hasn’t enjoyed more success there over the years, but all of that was erased with one brilliant weekend, capped off with one incredible final-round performance.

He left the starting line with Erica Enders – an impressive feat considering Line called Enders the best leaver in the history of the class – and had just enough power in his Camaro to win. It was a thrilling side-by-side duel that Line won by less than two feet, which only added to the moment.

Enders gave him a hug at the top end of the track, Line cherished it all with a huge amount of family and friends, and the celebration was on.

“It was a great moment that I will remember forever,” Line said.