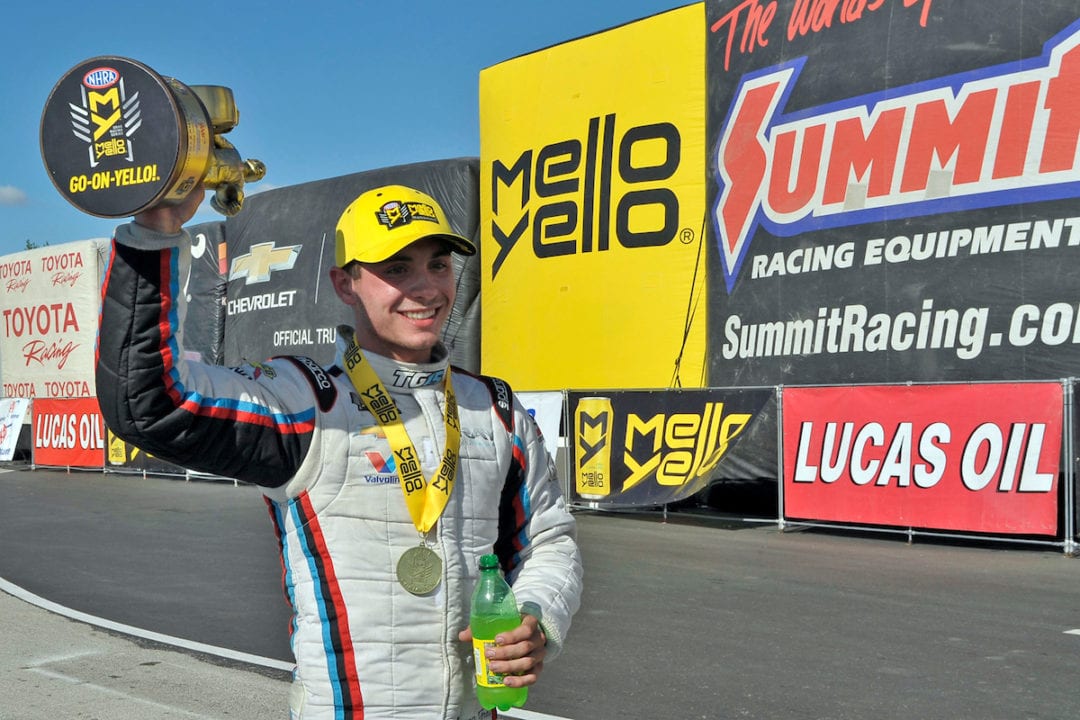 Maybe we should have seen this coming much earlier.

After all, you don’t put “15” on the doors of a Pro Stock car unless you have visions of driving a Stock car on a circle track.

One of the worst-kept secrets in the sport became reality the past couple days, as NHRA Pro Stock points leader Tanner Gray announced he was headed to the DGR-Crosley team to compete in NASCAR’s K&N Pro Series East in 2019.

The 19-year-old Gray will try to end 2018 with a world championship in Pro Stock, but it’s clear his eye has been on this. Drag racing has been a fun diversion the past two years, but Gray’s heart has always been with stock car racing.

Per his conversation with Speed Sport:

“I’m excited to get back to what I grew up doing. Everyone wants to know why I am transitioning to stock cars, but really, drag racing is newer to me than stock car racing. I grew up racing micro sprints, then outlaw karts at Millbridge [Speedway] and some late model stuff with LFR. Stock car racing was the plan all along for me,” said Gray.

“Overall, I feel like NASCAR provides more of a future for younger people, and that was the main reason for my decision. I love racing, and with the NHRA, you show up for three days and you’re guaranteed four runs for six seconds. That’s not a lot of seat time. I wanted something that had more dependency on the driver and something that provided more time behind the wheel.”

No doubt this is an unfortunate blow to drag racing. Gray is a young, good-looking potential star who has won a ton in two years. He may end up as a world champion this season. He could have been the torchbearer for a class trying to find its identity in 2018. But things appeared to have been looking up. The parity was impressive, we had a host of young guns in the class and participation had been better than previous seasons. 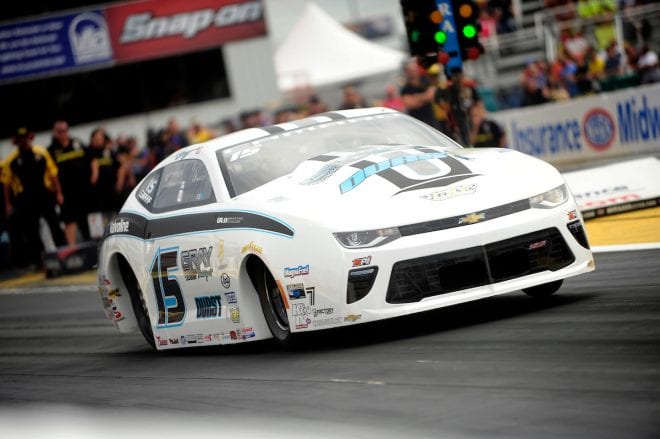 But just as quickly as it seemed like the class was trending in the right direction – heck, it was No. 1 in DI’s “20 Reasons to be Excited About Drag Racing in 2018” list in the latest issue – we’re now faced with more questions about the class and its future.

That part isn’t just about Gray, either. Drew Skillman has already said he’s not racing a full schedule in 2019 and Chris McGaha has said the same.

There’s also whispers other drivers – including a former world champion – could be racing far less in 2019 or out of the class altogether.

Can the class again recover from all that shuffling? To be sure, the class isn’t built on one, two or even three drivers, but a significant departure by a number of talented drivers doesn’t look great.

Perhaps that’s the main reason we’re seeing the possible addition of the Mountain Motor Pro Stock cars for 2019. It’s another way to bring in participation, but it doesn’t seem like the long-term solution for the class. Gray’s departure does no favors, either, even if it’s simply by way of optics.

The one bone I’ll pick is Gray’s assertion that NASCAR provides more of a future for younger drivers. That may be true if you come to the sport with the right resources and/or sponsors – and Gray isn’t hurting for resources – but I will gladly argue that the two sports are currently trending in two far different directions.

Now, the two sports are still far apart and NASCAR is still the King of motorsports by a wide margin, but its freefall is noticeable. Stands are empty, T.V. ratings – on an $800 million per year television contract, mind you – are plummeting with no end in sight. It may not be completely bleak, but the future is not headed in the right direction.

Of course, NHRA would love those numbers. But it’s also not on an $800 million/year TV contract (not even close) and it is certainly coming close to those numbers. As far as attendance, I’d wager NHRA has regularly outdrawn NASCAR races in 2018. Heck, minus Daytona and Bristol and maybe a couple others, NHRA may be well out in front. Compare the sold-out Las Vegas NHRA crowd earlier this year – and again next month – to the flies NASCAR drew in Sin City just a couple weeks ago. Indy comparisons aren’t even close. Same goes for Sonoma. The list goes on there.

While an anemic NASCAR crowd was on hand in Richmond, we had a far different scene at St. Louis for the NHRA race.

We had a sellout crowd for @NHRA @GatewayMSP on Saturday.  We had our biggest Sunday walk-up crowd ever.  Our overall live attendance for the weekend exceeded the ‘other’ racing series.  – Sad that the motorsports industry media ignores a POSITIVE story. The sky is not falling. pic.twitter.com/shT6o5nOzv

So, yes, drag racing does appear to be a place where futures can be built. Now, is that future the brightest in Pro Stock? Perhaps not. But there are dreams to be made and maybe one day you’ll see Gray back in the sport, grabbing the bigger spotlight in Funny Car or Top Fuel. After all, he’s 19 and interests can change.

But I certainly can’t fault Gray for following his dreams as they stand now. He’s got his entire life in front of him and a wealth of possibilities.

However, it is kind of funny to see the “Last Countdown“ shirts from the Gray team as he winds down just his second year in the class. I do wonder how that resonates with the rest of the Pro Stock class, but then again, I’m not sure Gray is overly concerned with hurting feelings or potentially rubbing people the wrong way.

He’s shown up with a bang in the class, let his feelings be known on a variety of things and then gone out and whipped up on just about everyone. Gray has 11 wins in his first 44 NHRA starts, an unbelievable number in a class this stocked with talent.

He’s raw, emotional and wears his heart on his sleeve, which, of course, some people have a problem with. Take a peek at the Facebook comments when Tanner is featured and prepare to cringe.

“Spoiled brat,” “silver spoon,” “no respect,” and “little punk,” are common themes, all from people who surely have never met him. Is he brash? Well, sure. But he’s made the most out of his situation, is insanely competitive, is young, isn’t afraid to speak his mind and is supremely talented.

Isn’t that what we want out of drivers?

But we won’t get the chance to answer that question, at least for now in the case of Gray. He has just four races remaining in his brief Pro Stock career. You can bet the likes of Greg Anderson, Jeg Coughlin, Erica Enders and Vincent Nobile will be motivated to make sure he doesn’t end it with a championship, which will at least make this season’s finish one to watch.

After that, well, we’re left with more questions for Pro Stock. Given the numerous bright spots in the sport and NHRA’s impressive ascension in recent years, let’s hope those questions for the class get the right answers.