Wes Morris is a driven young man. A sophomore at Boise State University, he carries a full course load, majoring in mechanical engineering. In addition to school, he works at a local machine shop as a machinist and on weekends he and his father, Carl, spend many hours of windshield time going to drag races up and down the U.S. west coast.

While growing up, Morris always was a force to be reckoned with in the Jr. Dragster ranks. As he neared graduation from high school, though, he and his dad moved him up to a big car, an altered in NHRA Nostalgia Eliminator Three on the NHRA Heritage Series trail. For his first season, Morris had very respectable season, taking a win in Bakersfield, California, and finishing third in NE3 season points.

One of the reasons Morris remains so driven took place Apr. 22, 2013, when a phone call from a Washington State Patrol trooper shattered the early morning calm. There had been a traffic accident and Wes tragically learned that his older sister, Dedra, had succumbed to devastating injuries at the crash scene. 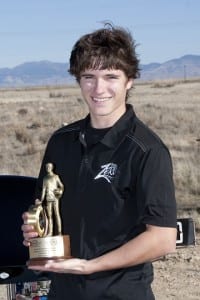 “She was coming home from Seattle with her boyfriend, he was driving, and she put her shoulder belt behind her so she could turn in the seat and get some sleep,” Wes explains. He learned Dedra’s boyfriend fell asleep about 3:30 a.m. and when their car left the Interstate through the median it began to roll over multiple times and Dedra was partially ejected.

According to their father, Wes and Dedra were very close as children; however, external influences had caused the two to drift apart. But just a couple of months before Dedra’s passing, he says they had started to come together again and were working on their relationship.

Naturally, Dedra’s death was devastating to Morris and his father, so the two Morris men turned to that one thing that would help in the healing process—and that was racing.

The day after Dedra’s funeral Morris was back at the race track working on Bucky Austin’s nostalgia nitro Funny Car at an NHRA Division 6 event that coincided with the second stop on the NHRA Heritage Series at Firebird Raceway, just a few minutes away from Morris’ home in Eagle, Idaho. Austin let the younger Morris know he had the support of the entire team and in his own loving way, “Uncle Bucky” put Morris to work cleaning parts and getting the clutch ready for each lap. “He needed to be busy and working hard, so that’s what I did, I kept him busy to keep his mind occupied,” Austin said before going on to win that weekend.

The entire Austin crew rallied around Morris in the thrill of victory and though it did temporarily distract him from mourning, both he and his father knew in their hearts they had to do more than just feel sad about Dedra’s passing. They wanted to take some sort of action, so Wes began reaching out to various organizations with offers of help. “I didn’t want this to happen to other people; I just felt like I had to do something,” he states.

His efforts were rewarded when the Office of Highway Safety for the Idaho Transportation Department heard his story and contacted Wes with a request to sit down and talk with him and his father. They eventually met with Lisa Losness, program manager for the Idaho Transportation Department Office of Highway Safety. Losness said she felt there could be a great opportunity for them to help spread the message of correct seat belt use, as well as address other highway safety issues that affect youth, such as aggressive driving and distracted driving.

It meant Wes would convey the message of “Toward Zero” to Idaho’s youth population, expressing the only acceptable number of fatal crashes is “zero.” Not only does he carry this message to the race track with him on the sides of his car; more importantly Morris takes his message to high schools across the state.

Wes Morris with a student from Jerome High School during a Towards Zero Deaths engagements that Morris participates in for the State of Idaho, Office of Highway Safety.

enforcement events and use it to attract attention to Wes and state safety officials so they can get the “Toward Zero” message out. In his presentations Morris often says, “It takes only about nine seconds for me to go down the track; when you get in your car, take those nine seconds to make sure you’re wearing your seatbelt properly and put your phone down.”

Morris has been a wonderful advocate for the Idaho Highway Safety Coalition since the state’s youth really connect with him, Losness says. “Wes is a very personable young man who is articulate, well presented and conveys our message well. You can tell he is passionate about safe driving.”

An entire media plan has been built around Morris, with the Safety Coalition hosting a kick-off media event as he has appeared on television and radio spots talking about proper seat belt utilization and eliminating distracted driving.

Morris’ efforts also have not gone unnoticed at the track. At a recent Heritage Series event, Jack Wright, owner of The Joker nostalgia nitro Funny Car, approached Morris and his father about having Wes license in his new Nova-bodied flopper and possibly driving it in a few races for the 2016 season.

Morris has the determination and drive to achieve his life goals, which include getting his college degree within four years, earning his nitro Funny Car license and hopefully one day drive a Funny Car in the big show. He wants to accomplish all this while continuing to spread the word to the youth of Idaho and beyond about safe driving and the need to properly use seat belts and keep their attention on the driving task at hand.

Most importantly, though, he’s determined not to let the death of his sister Dedra to just be a story in a newspaper. He wants to take this tragedy and work “Toward Zero,” making something positive from it so another family might not have to endure the pain of losing a child, a sister, a brother, or anyone else in a car crash.

Story and photographs by Brian Losness

This story originally appeared in Drag Illustrated Issue No. 107, the #Trending Issue, in February of 2016.