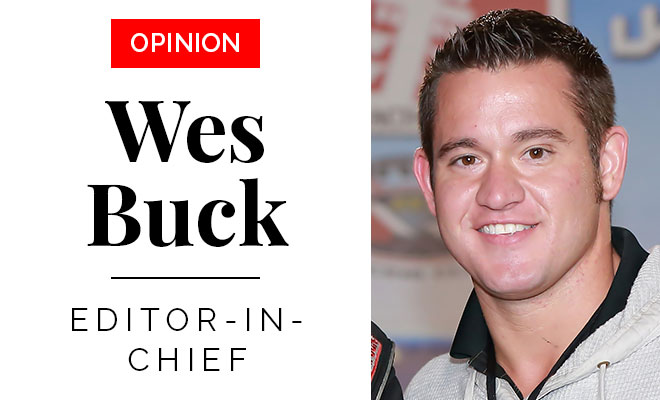 Heading into these autumn months, the ones racers and promoters salivate over due to the ideal atmospheric conditions they often provide, it’s hard for me to shake the feeling that our beloved sport of drag racing is getting to be a little too much like a side-by-side land speed contest.

Of course drag racers like to go fast, but that’s really not all this sport is about. It is a speed contest—of that there is no doubt—but in its purest form drag racing boils down to reaching the finish line first. More often than not having the faster of the two cars on the track will ensure that’s the case, but it doesn’t always work out that way.

Tires spin and tires shake; cars get out of control and engines or parts fail. What’s even more common? How about a driver that’s asleep at the starting line, a car that rolls the beams, an engine that stumbles coming up on the two-step, or any number of miscues that can come at the hand of us sometimes-lacking human beings. And, like it or not, any one of these things can put the faster car back on trailer sooner than planned.

That said, I have to wonder about racers who expect every drag strip to be prepped to death, promoters who postpone rounds of racing for hours to wait for more favorable air or track conditions or rule makers who sacrifice the spirit or integrity of a class for the sake of increased performance and/or consistency.

Before you plug my address into your GPS and come take me to task for discouraging measures taken in the name of safety, let me be clear; this has nothing to do with safety, my wanting to see more carnage, or any sort of lack of concern for the wellbeing of racers or their race cars. It does, however, have everything to do with the integrity and preservation of our sport.

There’s probably nothing more important than money when it comes to success in drag racing—especially heads-up racing—but I’ve always enjoyed the fact that money alone doesn’t guarantee success. You still have to be able to do the right things and make the right decisions when it comes time to qualify or race, and the ability to drive or tune one of these things isn’t for sale. It might be argued that you can win if you hire the best crew chief, buy the best car and equip it with all the best gadgets—but if you can’t cut a light to save your life, you’re still gonna’ be screwed.

There’s a harmony that has to exist in your program to do well drag racing. All the different elements vary in terms of importance, but it generally takes a suitable mix of money, equipment, talent, experience and luck. Having said that, I feel things like ultra-prepped race tracks, sophisticated traction controls, cars governed almost entirely by electronics and promoters simply waiting for the sun to go down are negatively impacting the sport of drag racing.

Of course, calling out the individual technological or mechanical advancements that I feel take away from the purity of different classes won’t serve me well—primarily because entire businesses are often built on or around them—but I think it’s important that we racers, fans and industry members at least be aware of anything that takes away from the human aspect of drag racing. Personally, I believe it’s critically important to the survival and growth of this industry that people remain at the forefront; that the better driver’s advantage isn’t negated by readily available gadgetry; that a better or more experienced tuner’s edge isn’t taken away by racing only on absolutely perfect surfaces in ideal conditions.

I believe driving or tuning a pro-level drag car should be difficult, not something anyone or everyone is capable of doing. It should be the guys (and girls) who can do it in the heat or on a bad track that have the upper hand; it should be the men (or women) behind the wheel who can cut a light, hit shift points, stay in the groove and do whatever else that should have the edge over those who can’t.

For the racer with more ingenuity and experience than money, oftentimes it’s only their ability to navigate a tricky race track or handle themselves behind the wheel that gives them a chance against a big-budget operation. And again, my personal opinion is that anything that neutralizes the advantages of a more talented, skilled or experienced human being should be frowned upon. Rule makers and promoters have to keep this in mind, even if it comes at the cost of participation in the short-term.

You can’t buy shoes that allow you to play basketball on the level of Michael Jordan or LeBron James, and honestly, that probably has prevented a few people from ever picking up a ball. Otherworldly human talents, however, have inspired generations of fans, as well as amateur and professional athletes, who otherwise may never have given their sport of choice a chance. Drag racing needs to let its otherworldly talents shine through to inspire its future.

There are at least two sides to this argument, and I’ve had it out with enough people on the subject to at least respect the notion that today’s superbly prepped tracks make for the best possible racing. But after seeing a handful of pedal-fest races get race fans on their feet, clapping and cheering at the NHRA Midwest Nationals this past weekend in St. Louis, I’m not convinced that anything less than straight-and-true full-pulls are the only thing that qualifies as good racing.