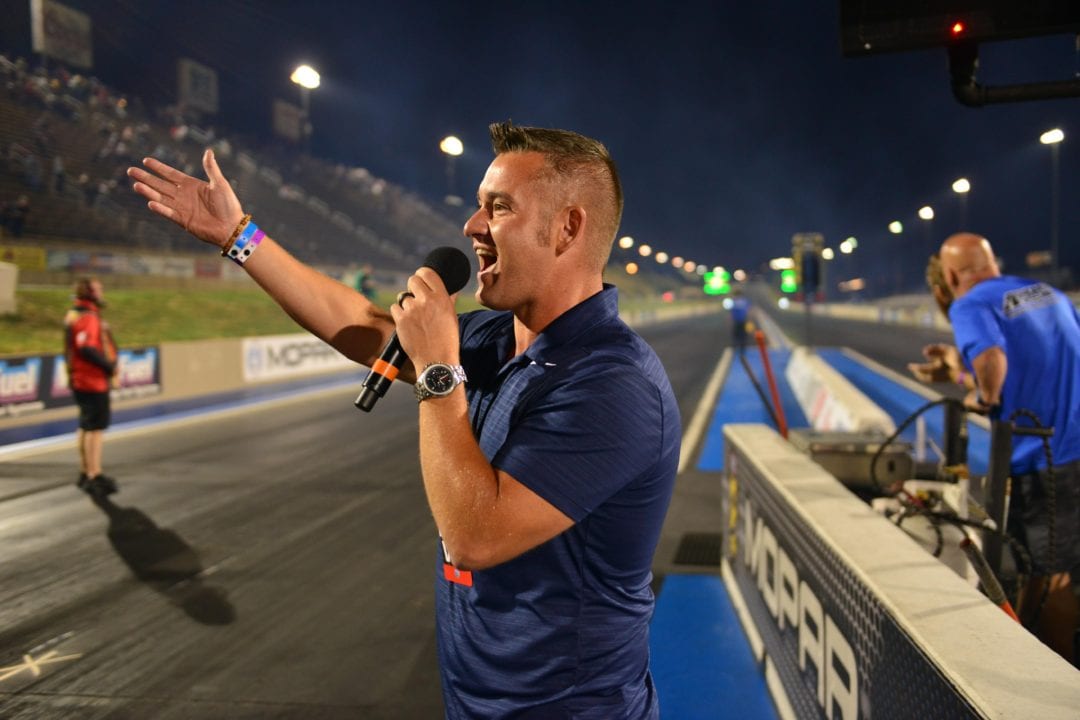 Last year’s inaugural Drag Illustrated World Series of Pro Mod presented by J&A Service and One Cure was a dream come true for DRAG ILLUSTRATED founder and editorial director, Wes Buck, who long desired to put on a high-stakes race of his own specifically for his favorite eliminator, Pro Modified. Just over a month after the successful first event last August, Buck announced the confirmed dates for the 2018 DRAG ILLUSTRATEDWorld Series of Pro Mod, August 10-11.

Held at Bandimere Speedway near Denver, Colorado, the first-ever World Series of Pro Mod featured an invitation-only field of 16 top-flight legal Pro Mod drivers from across the country, all competing for a winner-take-all prize of $100,000 and a slew of additional perks. The first-round pairings were drawn randomly live on DRAG ILLUSTRATED Live! a full month before the race. The entire main event, aside from the final-round match between Steven Whiteley and event champion Mike Bowman, was contested with the scoreboards off. In addition to the main event, the race weekend included the Aeromotive Wild Card Shootout on Friday night, as well as MagnaFuel Pro Star 16 and Quick Star 16 Shootouts, the JR Race Car 7.90 Shootout and the One Cure Reverse Race.

This year’s running of the World Series of Pro Mod will feature many of the same elements that made the inaugural event so successful. However, Buck and the team at Bandimere Speedway, led by “Sporty” Bandimere, have made a few changes to the program. Buck recently took the opportunity to discuss the general format and buzz surrounding the second annual Drag Illustrated World Series of Pro Mod presented by J&A Service and One Cure

Of all the successful elements from last year’s race, which one do you think was most important?

I really think – and quite surprisingly – it’s the invitational aspect of the event. I truly believe that people want what no one else has. The air of exclusivity that we created with our inaugural World Series of Pro Mod, in my opinion, stood out amongst all the cool things we did: big-time prize money, pomp and circumstance, no scoreboards, predetermined pairings, a unique location. Of all these different things, I believe the invitational aspect remains a critical component of the World Series of Pro Mod.

I have to admit that I was considering moving away from the invitational format for 2018, but I was quickly reminded by the racers how much being invited to participate means to them. That’s why I’m doubling down on that concept. I started hand-delivering invitations to drivers at the NHRA 4-Wide Nationals in Charlotte, and will continue next weekend at the NHRA Heartland Nationals in Topeka. I want each of these guys and gals to know how honored we are by their participation, what it means to us for them to accept an invite.

You caught a lot of heat for the invitational format last year. Some people probably still wonder why you don’t open it to every Pro Mod in the country. From a show standpoint, why stick with the invite-only format?

We’re talking about the biggest, richest Pro Mod drag race in the history of the known universe here. We’re talking about the 8th wonder of the world. We’re talking about the greatest show in drag racing. Personally, I think it’s only fitting that it’s invite-only. This is for the baddest doorslammer drag racers on planet Earth. This is for professionals. This is for gamblers and risk takers, concrete cowboys – racers that not only thrive in a high-pressure environment, but seek them out. That’s why the World Series of Pro Mod remains an invitational race. If you think you’re the baddest there is, if you think you can go up Thunder Mountain and win it all – please, by all means – let us know. We keep extremely close tabs on Pro Mod racers from all series and sanctions, though. There are a lot of racers that deserve to be involved, and we’ve been in touch with them. We know who we want to be involved and who deserves it.

When you’re talking about a race and event of this magnitude, it’s imperative that you control the cast of characters, and that’s what an invite-only allows us to do. It allows us to put together an incredible show full of big names, big personalities and fierce competitors – racers who will lay it all on the line, buckle the firewall, whatever they have to do to win big.

Legal Pro Mod racing was seemingly at its peak when you held the first World Series of Pro Mod last year, but the class has only continued to grow. There are over 30 cars capable of winning the race every weekend. What are you doing to accommodate this growing racer base?

We’ve increased the number of invites to 32. We’ve had over 50 Pro Mod racing teams reach out to us and express interest in being involved in 2018. We do want to introduce some new faces. Being that we’re seeing an influx of new people in the Pro Mod scene, lots of new names and top-flight teams that are showing up, combined with the excitement surrounding last year’s race, we have decided to increase the field. We’ll send out a total of 32 invitations to the World Series of Pro Mod.

Are you comfortable revealing any of the names who will receive an invitation?

While we will gradually release the full list of locked-in competitors over the coming weeks, I can say that we are loyal to the racers who supported us when this race was just an idea. We will never forget the people who believed in us when no one else did. Therefore, we’ve extended invitations to everyone who participated with us in 2017. All of the original World Series of Pro Mod competitors who were a part of drag racing history will be back in full force this year. In my opinion, the 16 gentlemen who staged up their hot rods last summer at Bandimere for the first-ever World Series of Pro Mod are part of drag racing history – I’m thrilled and honored to have them back.

The World Series of Pro Mod will again take place at Bandimere Speedway in Morrison, Colorado, a short drive from downtown Denver. For anyone who wasn’t at last year’s race or has never been to Bandimere, can you explain why the race is held there?

After the monumental first event that we had on “Thunder Mountain” last year, I’m continually reminded that Bandimere Speedway, that Front Range region, that is the perfect location for this event. It takes all of these racers out of their element and puts them on a level playing field. Everybody is going out there and having to dig into their tune-up toolbox trying to find ways to make power at that altitude.

Plus, the Bandimere family absolutely makes the difference. When we were planning this event, at the forefront of my mind was treating Pro Mod drag racers the way they deserve to be treated. I want these guys to park on pavement. I want these guys to be treated like rock stars and given whatever they ask for. The Bandimere family were and continue to be 100-percent on board with the notion that Pro Mod is the universal language of drag racing. These are the stars and cars of our sport and we need to treat them as such. The Bandimeres are all about customer service. They’re all about attention to detail. That’s exactly why the eighth wonder of the world, the biggest, richest Pro Mod drag race goes down once again on “Thunder Mountain” at Bandimere Speedway.

It would be a sin for me not to mention the baddest racing surface on God’s green earth. Under the care of Larry Crispe and his sons, the “Traction Twins”, Cale and Cody, I believe the dragstrip in Denver is the best on the planet. And, of course, that’s exactly where you want to have a $100,000-to-win, winner-take-all Pro Mod shootout. Where else would we have it?