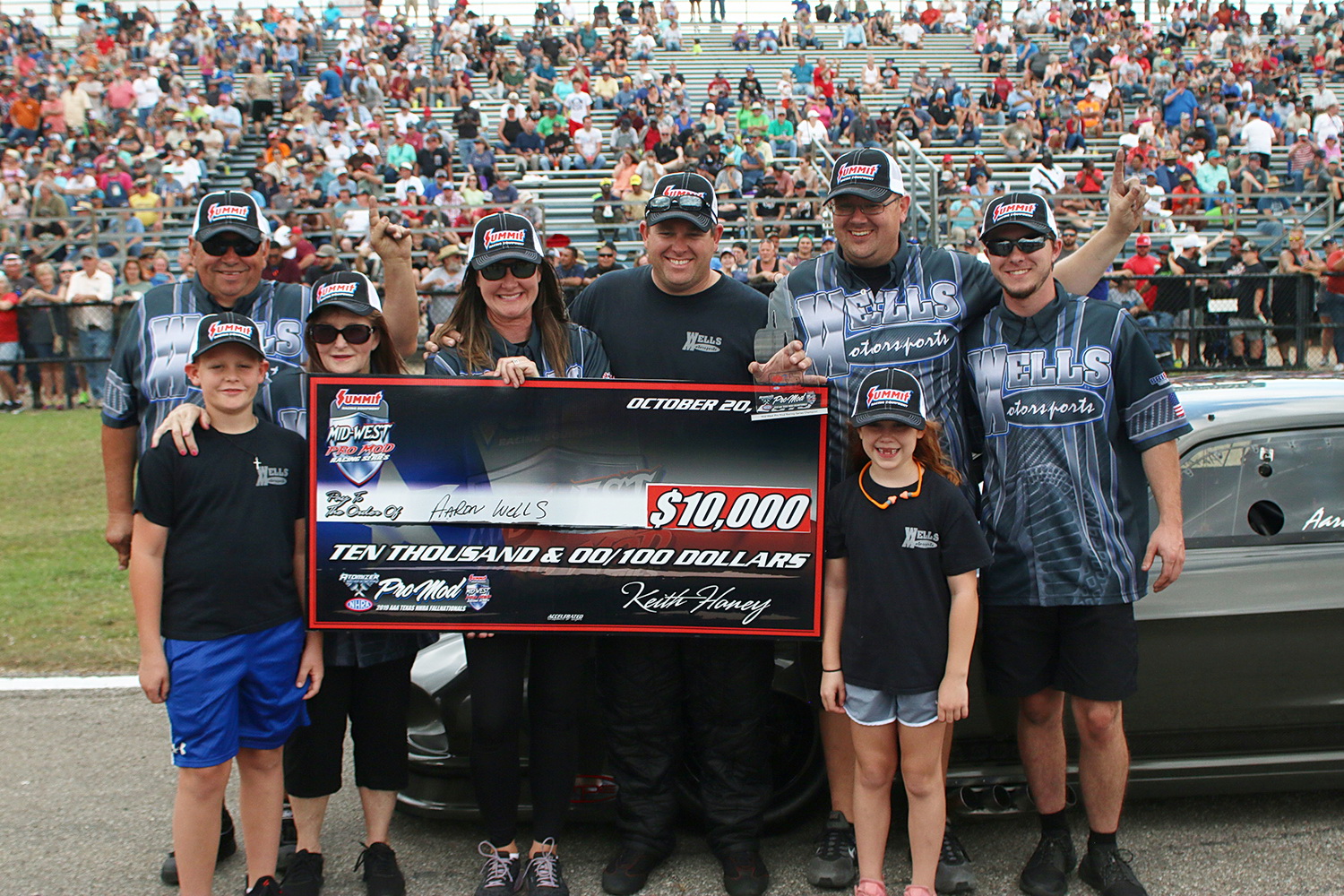 “Honestly, that was as exciting for myself and my team as winning the season championship,” Wells said. “And I don’t really know that I can explain why I’d feel that way except for it’s just such a unique opportunity and, you know, possibly a once-in-a-lifetime experience.”

MWPMS owner and promoter Keith Haney brokered the unique eighth-mile Mid-West Series race after several months of negotiations with NHRA and Motorplex officials. Held within the NHRA’s all-quarter-mile national event, it featured 22 invited MWPMS teams vying for a 16-car qualified field, with the semi-finals and finals staged on Sunday in front of a huge NHRA raceday crowd and an NHRA “Wally” (trophy) going to the winner.

“You couldn’t have scripted it any better,” Haney stated. “We had Aaron Wells against Justin Jones, number one versus number two in Mid-West Series points, going for the win in the final round. It was just a thrilling end to a fantastic weekend for everyone involved.

“But I have to say it couldn’t have happened without everyone at NHRA and the Texas Motorplex, who treated us awesome, or without the backing and support of Atomizer Racing Injectors, Summit Racing Equipment, Jerry Bickel Race Cars, Stroud Safety and Imperial Construction. I can’t thank all of them enough for helping us make this dream come true.”

After one round of qualifying on Thursday and Friday night (a third scheduled for late Friday was rained out), Jeffrey Cummins Jr., of Brookshire, TX, started from atop the MWPMS order with a 3.78-seconds, 200.18-mph blast in his supercharged 2019 Mustang GT. Close behind in second was E.J. Hickl with his blown “Crime Boss” ’41 Willys, with Tommy Cunningham third in another supercharged ’67 Mustang. Haney with his nitrous-fed “Black Mamba” 2019 Camaro broke up the blower brigade at the head of the field as he started fourth, just ahead of Todd Moyer in his twin-turbocharged ’18 Camaro.

Like many MWPMS racers, Wells initially had trouble hooking up his blown ’67 Mustang GT 500 to the all-concrete Motorplex surface, but managed to put a 4.06 lap together in Q2 to start an uncharacteristic 14th. Meanwhile, Jones in a supercharged 2018 Corvette based just an hour away from the track in Weatherford, TX, started from the ninth position after running an early shutoff 3.86 at 181.86 mph on Friday night.

“It’s amazing how different the track was from what we’re used to,” said Wells, who also was interviewed during qualifying for the official FS1 broadcast of the NHRA event. “With NHRA the majority of it was all rubber and we’re used to quite a lot of glue. So learning where we could apply the power, and honestly, learning how to make the car slow down was our biggest challenge. We really struggled not to just spin the tires.” 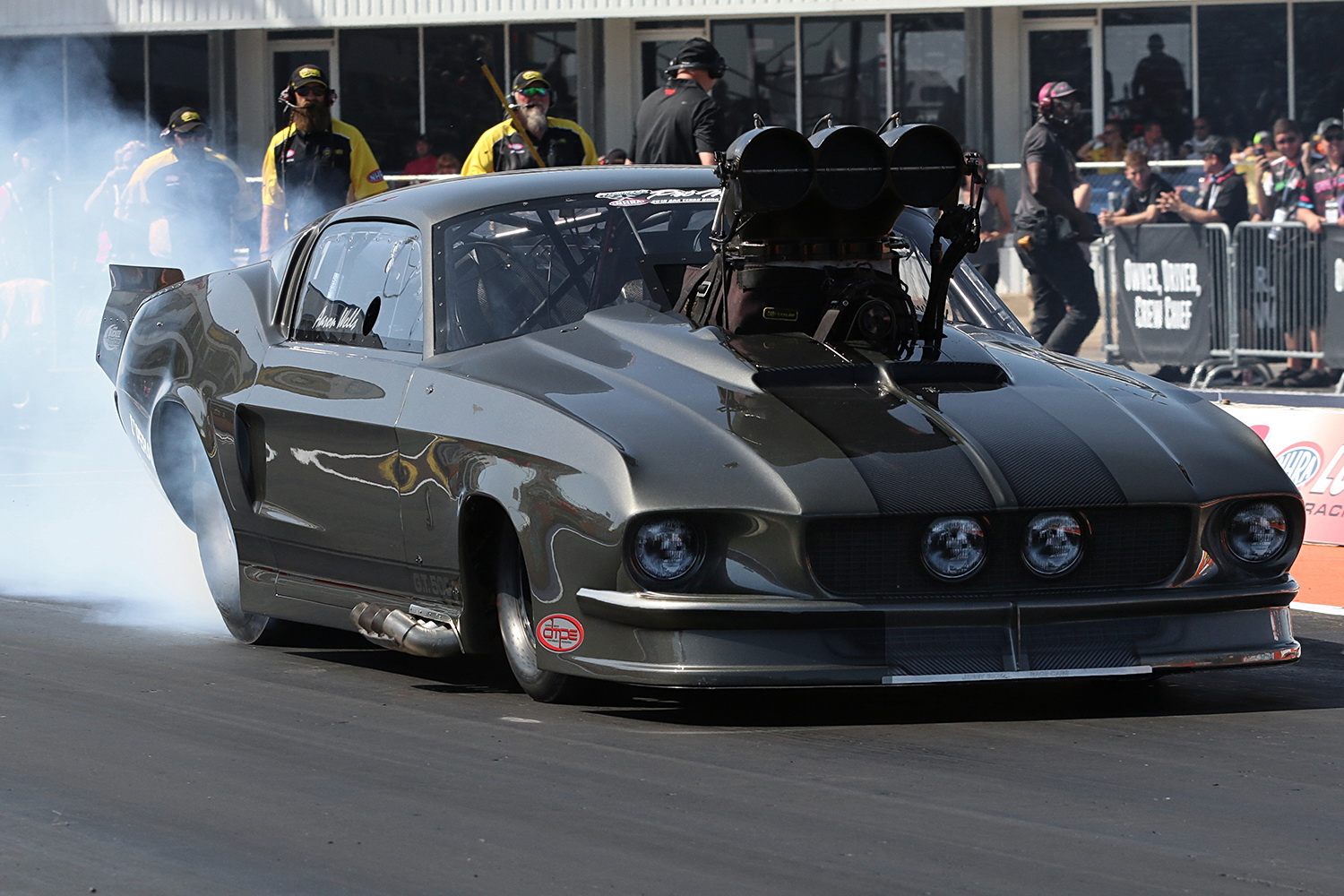 In Saturday’s first round of MWPMS eliminations, with legendary announcer Al Tucci calling the MWPMS action, Wells had to overcome a holeshot by Cunningham with a 3.77 that gave him a slim four-thousandths of a second advantage at the finish line. He then improved to 3.75 in round two for another come-from-behind win over Clint Satterfield to close out his day.

On the opposite side of the ladder, Jones made a solo 3.76 pass in round one after Todd Martin’s blown ’67 Mustang had to be shut down on the line. In round two, he went 3.68 in what turned out to be low E.T. of the meet for the MWPMS to beat Cummins and advance to the semis on Sunday.

“When I first started announcing I dreamed of doing the NHRA someday, but then I got into doing all the fast doorcar stuff, so this was like the dream come true for me,” said Tucci, who covered all MWPMS events this year. “It was great seeing all these Mid-West Series racers that I got to announce all year performing on the big stage. And it was an honor for me to be there, too.”

Also unprecedented for an NHRA national event, MWPMS event coordinator Ellen Eschenbacher was able to video and transmit her popular Facebook Live coverage to MWPMS fans at home and for the first time MWPMS videographer Nathan Williamson recorded the starting-line action alongside FS1 film crews. Meanwhile, MWPMS sponsor partners benefited from seeing their commercials play on the trackside Jumbotron, as well as online with NHRA.tv.

“It took a real collective effort to make it all happen,” Haney said. “I’m very proud of what everyone on the Mid-West Series crew contributed, and especially of how our race director, Jimmy Boles, and our all-over helper Randy Hancock worked so closely with the NHRA people and kept everything running smooth and on schedule.”

The semi-finals saw Wells once more improve to 3.74 seconds at 204.98 mph to send Adam Flamholc packing, while Jones ran 3.75 at 203.52 to end Moyer’s quest. That left only the final round to determine the first Wally to be awarded to an eighth-mile winner at an NHRA national event.

Unfortunately, as soon as the starting tree turned green, the rearend gears in Jones’ Vette let go while Wells once more improved to 3.73 seconds at 205.69 mph to secure the race win and take the much-coveted trophy home to Oklahoma City.

“After we qualified we just kept chipping away at it a little bit each round and it got quicker as we went. And then we met Justin in the finals where they had their own struggles, so it turned out to be not such an exciting finish, but it sure was exciting getting there,” Wells said.

“You know, it was a great, great weekend until the final round, and I wanted that win just as bad as anybody,” said Jones, just 20 years old and in his second year of Pro Mod racing. “So it was a good time. We had a bunch of family and friends out for what’s a hometown race for us, so we had a blast.”

Both finalists heaped praise on Haney, his staff, and the NHRA for making the race happen.

“I know that Keith and all the guys involved with the Mid-West Series really put a lot of time and effort into this. And it’s not just for Keith. He does this for all the racers that support him and he wants everybody to have just as much fun as he has doing this,” Jones said. “He wants to give everybody a place to race, a nice track, a bunch of fans, and just a good atmosphere. Him and (MWPMS race director) Jimmy Boles, they really go all out and stick their neck out for all of us and we really appreciate it.”

“We very much felt welcomed by everyone from NHRA,” he said. “All the Safety Safari guys, they were great, very nice to us, very welcoming. And the NHRA pro teams, we even had a few come over and visit with us and obviously the crowd was very responsive. I think they very much appreciated the show we put on. We had several people come up asking where else we would be racing, so it was really just encouraging to be a part of it all.”

For Haney, the MWPMS Invitational marked an historical moment, but not for personal reasons, or for NHRA or even MWPMS, but for drag racing in general. The motivation for putting the event together was to expand the sport’s reach across two distinct fan bases and ultimately benefit local tracks, he said.

“NHRA fans got to experience eighth-mile racing and the Mid-West Pro Mod Series and our group of guys. And I think we brought several thousand new fans to an NHRA national event,” Haney said.

And though nothing is yet agreed to, Haney confirmed he’s already started working on a similar combined event for next year. 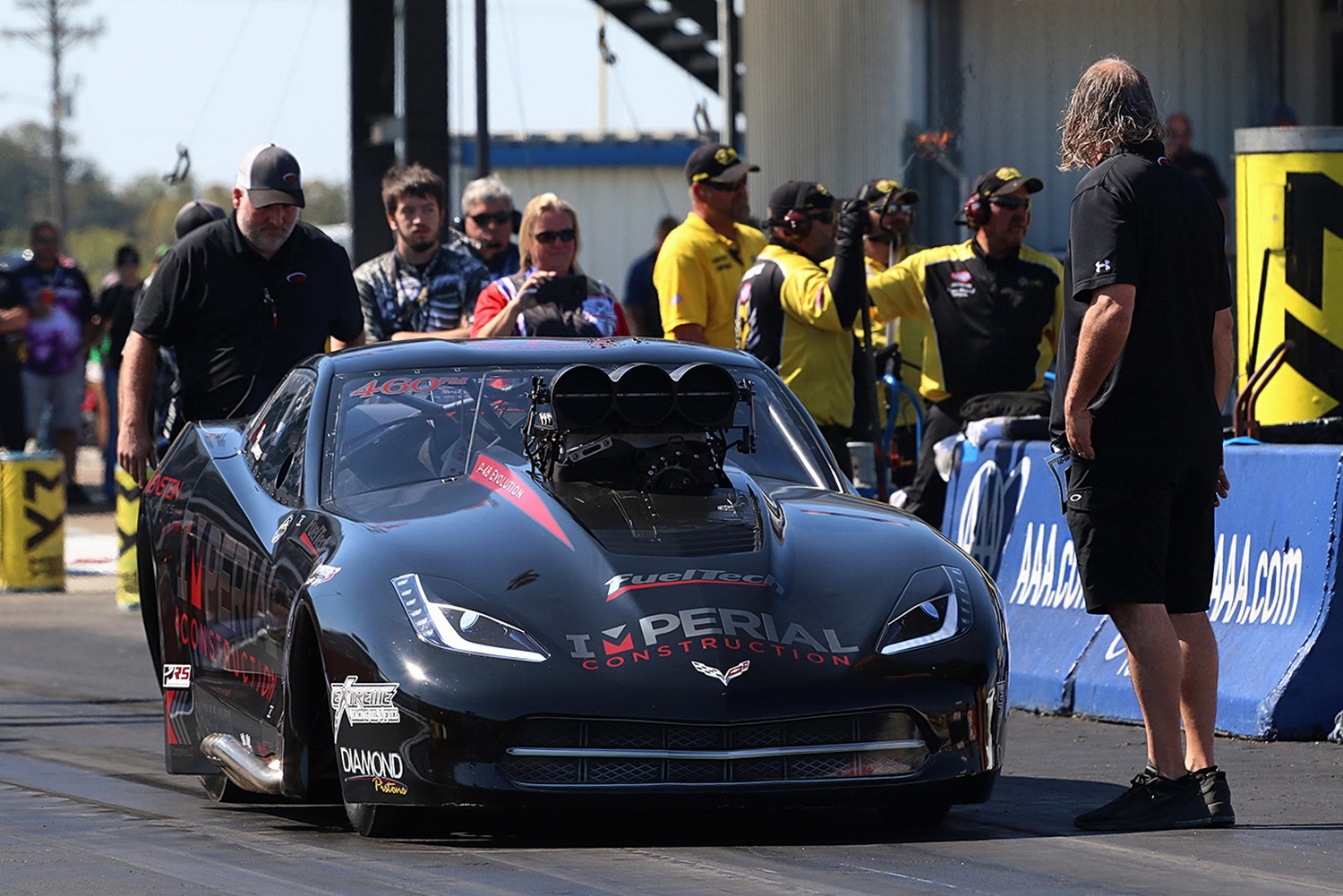