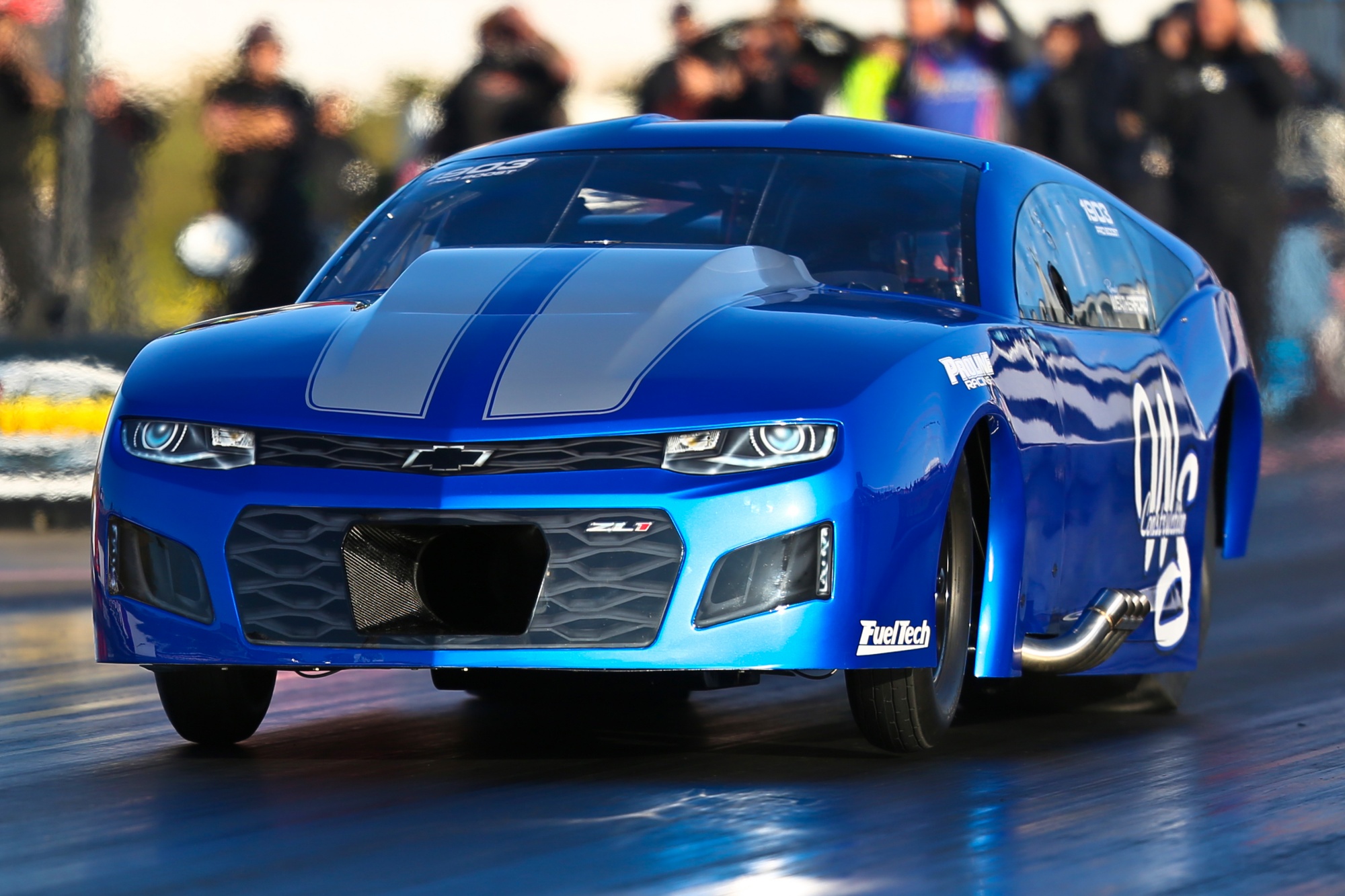 The PDRA’s sportsman classes also set their fields after two qualifying sessions. The No. 1 qualifiers are John Benoit in MagnaFuel Top Sportsman and Brian Bednar in Lucas Oil Top Dragster.

In the Jr. Dragster classes, the low qualifiers are Destiny Taylor in Coolshirt Pro Jr. Dragster presented by Thornton Motorsports with a perfect 7.900 pass, and Mallory Logan in Gilbert Motorsports Top Jr. Dragster with her .001 reaction time.

Randy Weatherford laid the groundwork for his record-setting Pro Boost pass in pre-race testing Thursday evening, firing off a 3.600 in similar conditions. With tuning by Pro Line Racing’s Steve Petty, Weatherford stepped up to a 3.597 at 209.14 to close out Friday qualifying. 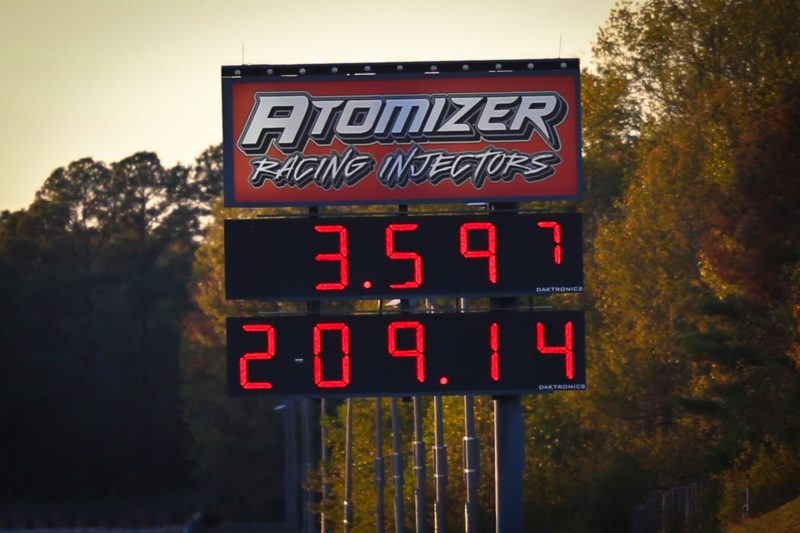 “It ran a .60 the day before in testing,” Weatherford said, “and we felt like we lost some in the 60-foot since I went in deep, and it showed on the board when we put the .59 up there. It’s working. The car works good. I’m starting to get used to the car and I’m cutting better lights. I think I can win this race. The opportunity is there, I just have to walk through the door.”

The Pro Boost rookie will take on Bubba Turner in the opening round of eliminations Saturday. Eric Gustafson in his ProCharger-boosted Coast Packing Company ’69 Camaro qualified No. 2 with a 3.615 at 206.83, followed by championship contender Kris Thorne’s 3.625 at 219.79 in his twin-turbocharged Thorne Site Development ’17 Corvette. 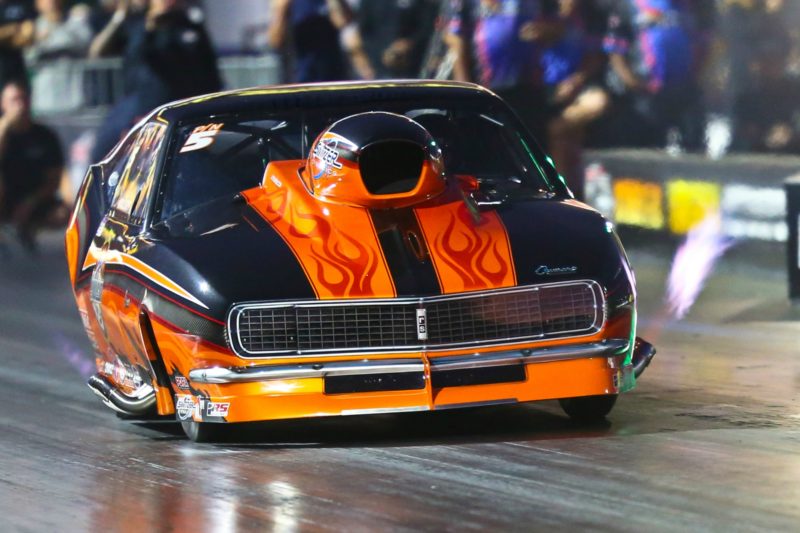 Nitrous Pro Modified veteran Jim Halsey entered the World Finals with his sights set on clinching his first Pro Nitrous world championship. The Maryland-based driver came a few points closer to accomplishing that goal when he drove his Brandon Switzer-tuned, Fulton-powered ’68 Camaro to a 3.622 at 208.07 to qualify No. 1 for the third time this season.

“For the championship fight, it really helps us in points,” Halsey said. “I think we were 297 ahead of Tommy [Franklin]. I think this puts us at 304, so it kind of gives us another round to play with if we need to. But looking at the qualifying sheet, I’d have to race Tommy second round anyway, so that could be go or no-go right there.”

Halsey will start race day with Dane Wood in the other lane. Defending world champion Jason Harris laid down a 3.658 at 205.38 in his Musi-powered “Party Time” ’69 Camaro to qualify No. 2. No Prep Kings star Lizzy Musi followed closely with her 3.659 at 208.20 in the Frank Brandao-owned, Musi-powered Edelbrock/Lucas Oil “King Kong 7” ’19 Dodge Dart. 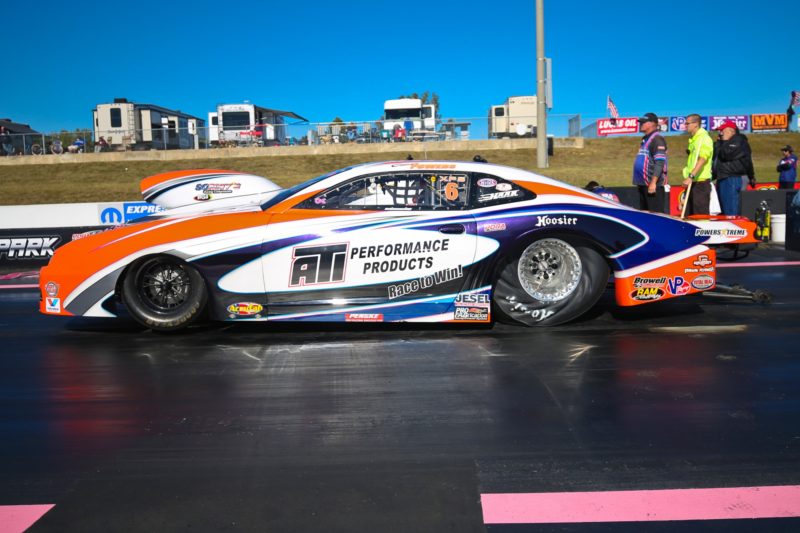 With John Montecalvo essentially clinching the Extreme Pro Stock world championship when he made his first qualifying pass, the rest of the field moved their focus to winning the event and attempting to run the first sub-4-second pass in class history. While no one met that mark, Chris Powers came very close with his 4.007 at 179.52 in the ATI Performance/Liberty’s Gears ’14 Camaro.

“We just try to go out and make some good, clean runs all weekend,” Powers said. “We tried to put a little more in it with the clutch and make a good, perfect run. We left a little bit on the table, so we’ll try to finish it up tomorrow and get it in the 3s. It would definitely be a huge accomplishment for us. We’d love to go 3.99 for Craig Liberty and ATI and show off the good products they put out for us.” 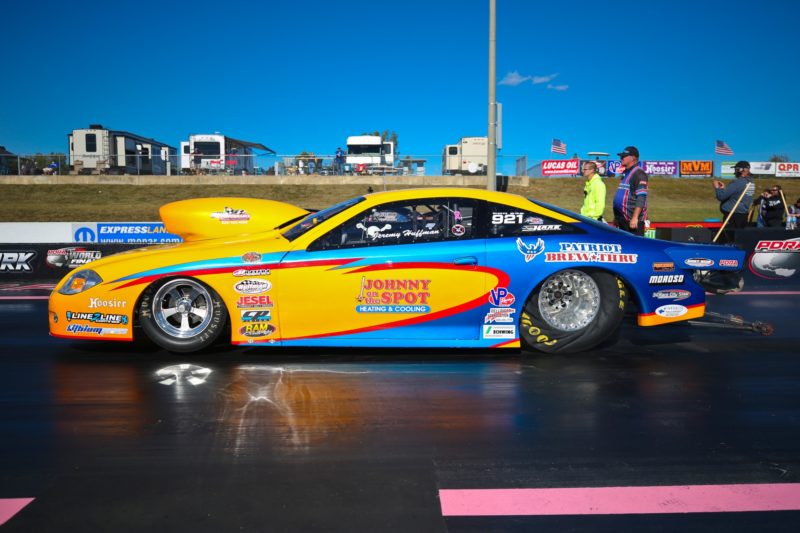 The naturally aspirated Pro Outlaw 632 entries thrived in the cool Friday evening conditions, as a trio of all-motor cars topped the qualifying order. Catawba, North Carolina’s Jeremy Huffman led the way in his Johnny on the Spot Heating & Cooling ’10 Cobalt, qualifying No. 1 for the first time with a 4.219 at 166.89.

“We’ve had some ups and downs this year with breaking some parts and running well at times, but it feels really good to be able to put it all together here at the end of the season,” Huffman said. “It’s got us really excited. We’re making progress, but we’re still learning this combination. We’ve only had this car for about a year now, and I’m brand-new in a clutch car, so we’re really just starting to get comfortable. We might try to hit some races over the winter to get ready for PDRA next year, but we are really excited moving forward.”

Huffman will line up against Vinny LaRosa in the first round. Defending world champion and points leader Johnny Pluchino qualified No. 2 with a 4.22 at 167.88 in Dominic Addeo’s Kaase-powered ’06 Ford Escort. Veteran doorslammer wheelman Tony Gillig steered his Madcap-powered Gillig-Wagner Motorsports ’96 Oldsmobile Cutlass to a third-best 4.237 at 166.95. 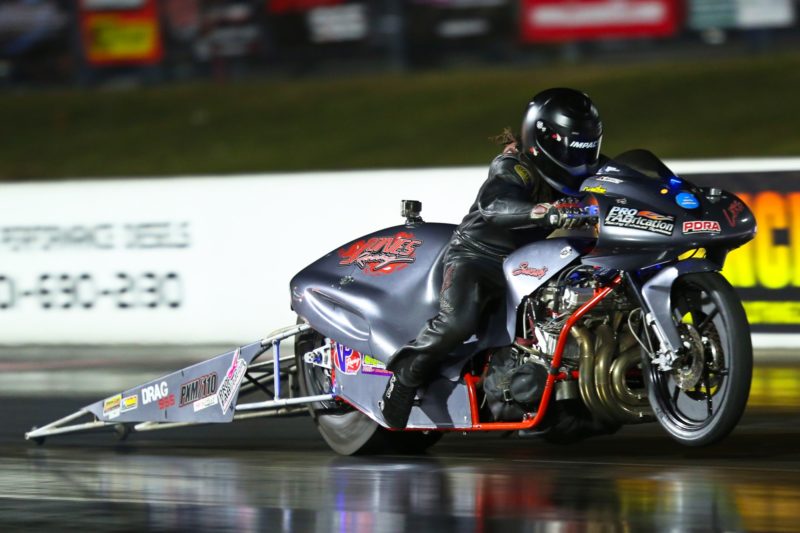 The Pro Nitrous Motorcycle championship battle is the tightest of all of the pro classes going into Saturday eliminations. No. 2 in points Chris Garner-Jones gained a handful of points on defending world champion and points leader Ronnie “Pro Mod” Smith by qualifying No. 1 with his 4.031 at 173.05.

“I feel very good knowing that I’m in the championship race,” Garner-Jones said. “Hopefully we can carry this through to the final round [Saturday] and get a win. That’s all I’m focused on right now: going rounds. I love [the pressure] because a few years ago I was No. 1, came into this same race and lost first round and lost the championship. The pressure, I love it. I’m here for it.” 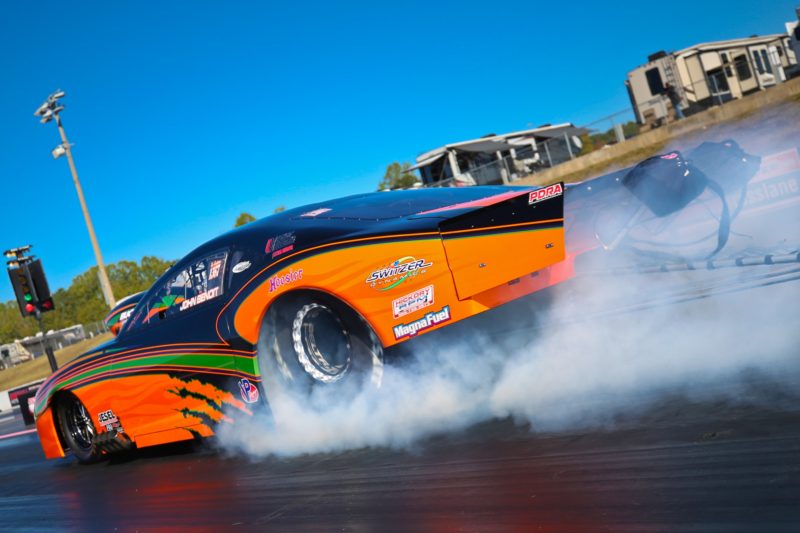 Consistent low qualifier John Benoit came within just over a hundredth of a second from setting the PDRA Top Sportsman with his 3.752 at 201.10 in his nitrous-assisted ’17 Camaro. Benoit held around a tenth over No. 2 qualifier Jeremy Creasman, who ran a 3.861 at 188.81 in his centrifugally supercharged ’68 Camaro. Cheyenne Stanley in his ’07 Mustang qualified No. 3 with a close 3.866 at 196.10. 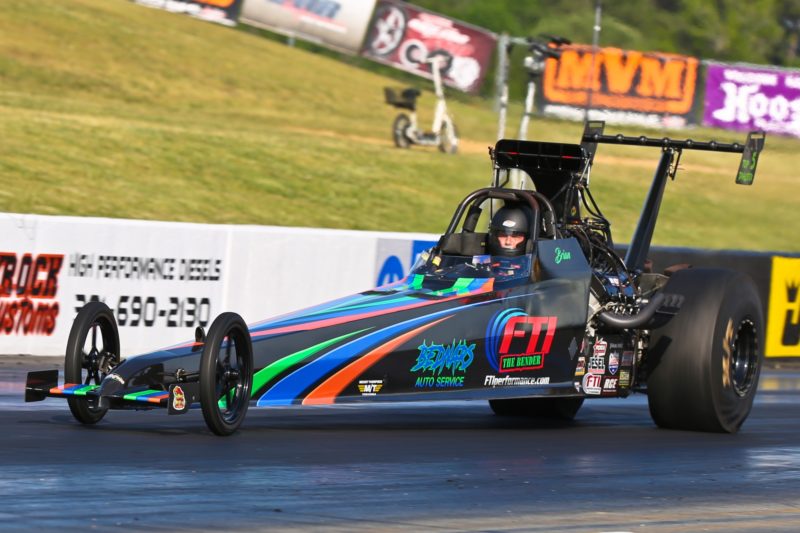 Ocala, Florida’s Brian Bednar took his supercharged FTI Performance ’09 Spitzer dragster to the top spot in Top Dragster on the strength of a 3.695 at 196.99 pass. A pair of centrifugally supercharged dragsters followed Bednar, with Michael White No. 2 with a 3.717 at 194.94 in his ’14 Maddox dragster and Kathy Fisher third with a 3.758 at 190.62 in the “Dragoness” ’15 American dragster.

The 5th annual PDRA Brian Olson Memorial World Finals presented by Pro Line Racing and $hameless Racing continues Saturday morning, beginning with Edelbrock Bracket Bash eliminations at 10 a.m. The first round of eliminations for the professional classes is scheduled for noon. Final rounds are set to run at 7 p.m.