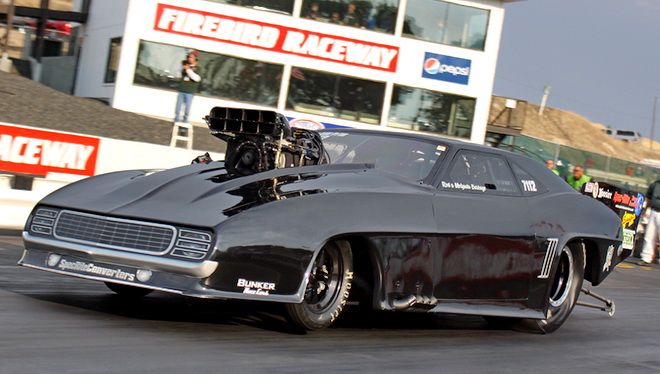 Listed as “one of the coolest major events on the Firebird Raceway schedule”, the Fox Hunt action will kick off Friday and wrap up Saturday evening.

Originated by announcing legend Steve Evans in the 70’s at Irwindale Raceway, the Fox Hunt event has always offered one key principal: All Ladies are admitted Free. Drawing upon Evans’ near-genius promotional insight, Firebird Raceway introduced this same concept to Idaho and eastern Oregon fans way back in 1977. Sandwiched halfway through the season the Fox Hunt has certainly become a real hit for both fans and racers alike.

With the Fox Hunt event being the first of two stops to Boise on the WCOPMA schedule it has become one of the key races for the West Coast Outlaw Pro Modified Association. Quite a number of 240-mph doorslammers will slug it out on the quarter mile headed up by reigning champ and track record holder Marc Meadors with his “Pure Hell” Camaro. Meadors won the Super Chevy event earlier this month at Bakersfield, CA. Entries include the likes of former Nightfire winner Rod Burbage (above), WCOPMA record holder Mike Maggio, past Fox Hunt winner Lee Smith, Jeremy Hanger, Garrett Richards and possibly others.

Added to the Pro Mod lineup will be the crowd pleasing BB Funny Cars, Jet Cars, a Wheelstander and one of the biggest Gold Cup events of the season (with two separate days/nights of racing in a variety of classes, including the Fox eliminator presented by the Naughty Girls) and you can certainly sense that the Fox Hunt has the makings to be one of the best races of the year for Firebird Raceway. Additionally, the Saturday race will mark the third stop in the Division 6 Land of the Leaders Challenge.