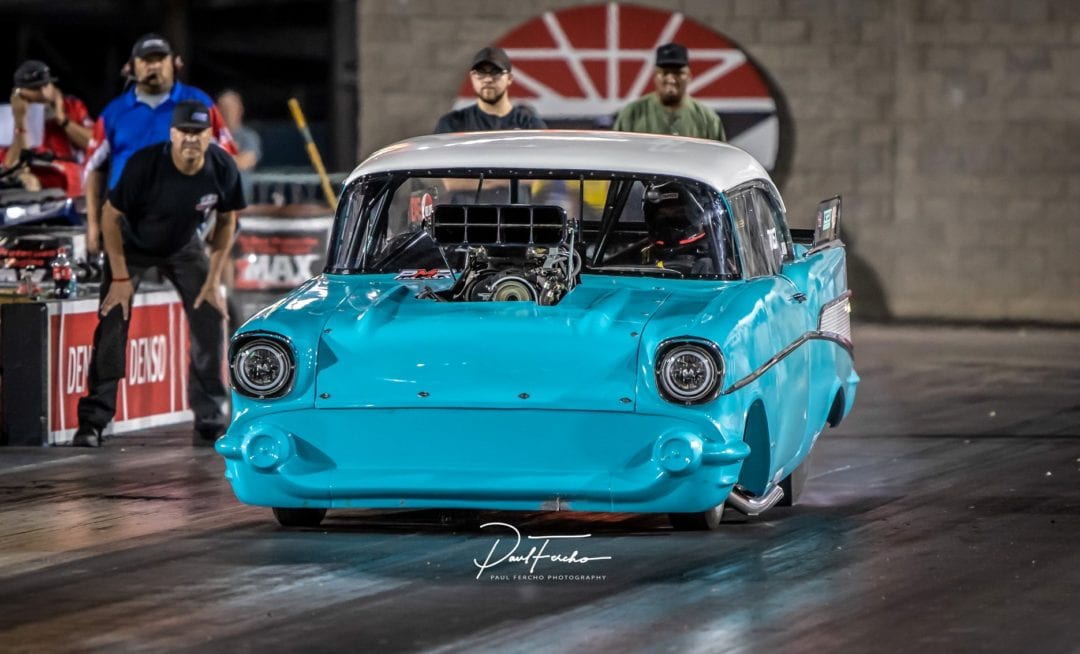 “With temperatures in the high 80s and low 90s during the day, it was great to have been racing at night and into the wee hours of the morning to lay down some great numbers,” said Danny Topol, promoter, WCHRA. “Jeff, Randy and the Las Vegas Motor Speedway crew prepped the track like no one’s business. We had multiple racers and crew members come up and say how bad ass this night racing is and how great the track was! With over 130 cars and good spectator counts, we had a great time!”

Legendary Al Tucci was announcing and entertaining on the mic again! We were so excited to have him out on his birthday in Las Vegas with us. He will also be with us at “The Duel”, October 19-20 at Auto Club Famoso Raceway so don’t miss it!

Friday was a WCHRA Test N Tune, which went off without a hitch and was capped off with a little bit of grudge racing, including a match between Rich Hoyle and Freddy Bueno for the amount of $4,000. It was a wild and crazy pass, but Bueno crossed the finish line first.

Saturday was intense with racers traveling far and near. Everyone wanted a chance to prove their worth, collect the big payouts and there were two racers that still had the chance at the Triple Crown Jackpot presented by Area 51 Fireworks.

Small Tire presented by Accessories Plus and Menscer Motorsports had Rich Hoyle in “The Greyhound” from Palmdale, CA in his nitrous-assisted Chevy Nova take the win in the final after Roger Holder of Bakersfield, CA had some problems on the starting line in his nitrous-fed “Seduction” ’68 Camaro

Outlaw 8.5 presented by Vortech Superchargers and Voodoo Racing Innovations was taken over by the Los Angeles, CA-based Anthony “Big Worm” Smith. Smith picked up the win in his small-block Ford turbocharged ‘93 Mustang over Jeff Bomyea’s twin-turbo ’68 Camaro out of Surprise, AZ.

The WCHRA’s new class, Millennial Muscle vs Carros Deportivos (Sport Compacts) presented by Voodoo Racing Innovations, had a great first turnout with local Ken Morgan taking home the win in his ’03 Mach 1 over Brian Felter of Ogden, UT in his ’19 Dodge Challenger.

Top Sportsman presented by Speedwire Systems and SI Valves had Gary Ross as the last man standing in his naturally aspirated ’69 Camaro in an exciting final round against past Top Sportsman winner Ricky Deuschle out of Palmdale, CA.

King of the Hill Index presented by RES/Race Engine Systems and RC Components was an exciting combination of A/Gas, B/Gas, C/Gas and D/Gas racers. Arizona-based A/Gas racer Tom Tourek took his beautiful ‘55 Chevy to the winners circle after local Jaclyn Generalao-Jones had some problems in her B/Gas ’23 Roadster and unfortunately couldn’t make it to the final round.

Super Pro presented by VP Racing Fuels and Mickey Thompson Tires was dominated by local racer Terry Souza. Souza dusted off his ’01 Racecraft dragster after a year of it sitting in the trailer and took it to the winner’s circle after taking down David Phillips in his ’82 Camaro, also out of Las Vegas.

Pro presented by VP Racing Lubricants was taken over again by Chris Barger out of Madera, CA in his ’72 Chevy Nova, keeping him in the hunt for that $20,000 Triple Crown Jackpot presented by Area 51 Fireworks over local Tristan Craig in his ’01 dragster.

All of us at WCHRA would like to say thank you to all of our great racers, sponsors, fans and certainly the Las Vegas Motor Speedway staff! We couldn’t do it without each and every one of you! If you missed this one, don’t make the same mistake twice! “The Duel ” presented by Magnafuel Products will be held October 19-20 at Auto Club Famoso Raceway! Watch our Facebook, Instagram and website for upcoming race information.

We also have one of our WCHRA Fontana Series minor league races coming up at Auto Club Dragway in Fontana, CA on September 14-15, so make sure you come on out and check it out!