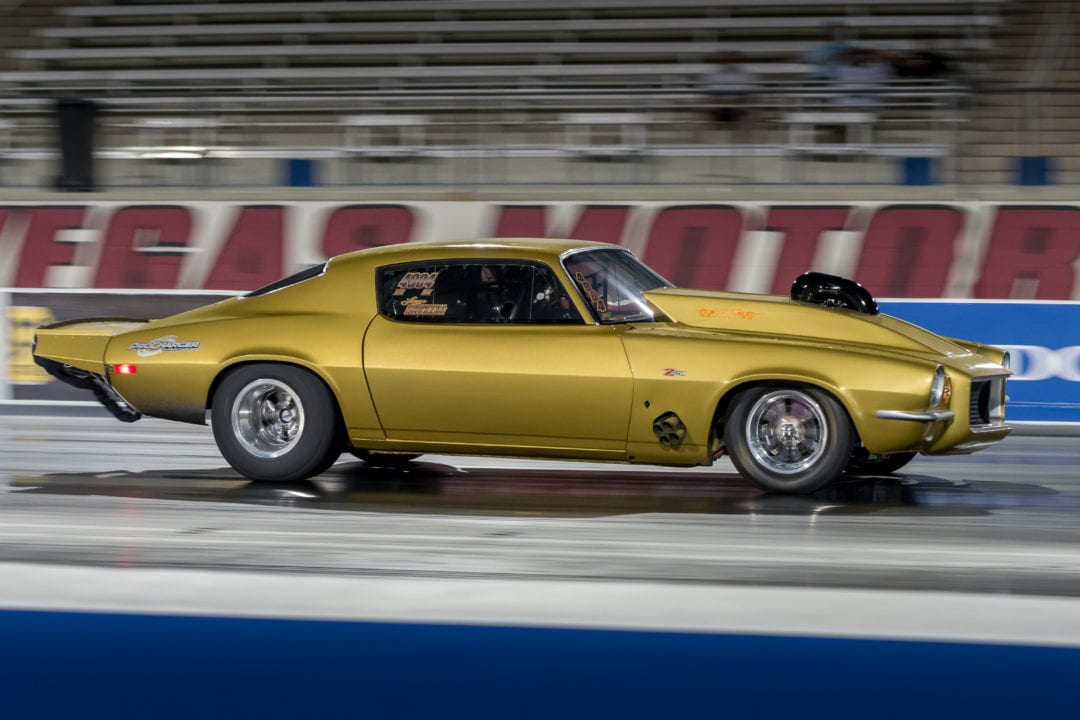 West Coast Hot Rod Association returned to The Strip at Las Vegas Motor Speedway, June 1-2, for the 3rd annual Kings Oil Tools West Coast Hot Rod Association’s “The Battle” presented by Ultra-Carbon. With the temperatures in the high 90s during the day, it was a savior to have been racing at night and into the wee hours of the morning. Jeff, Samantha and the Las Vegas Motor Speedway crew prepped the track like no one’s business. We had multiple racers and crew members come up and say how bad ass this night racing is and how great the track was! With over 130 cars and good spectator counts, we had a blast!

We had the legendary Al Tucci announcing and entertaining on the mic again! We were so excited to have him out in Las Vegas with us. He will also be with us at “The Duel”, September 7-8,  at Tucson Dragway, so don’t miss it!

Friday was a WCHRA Test N Tune, which went off without a hitch and was capped off with a little bit of grudge racing, including a match between Jay Boddie and Guiseppe Gentile for the amount of $11,200. It was a wild and crazy pass, but Gentile crossed the finish line first.

Saturday was intense with racers traveling far and near. Everyone wanted a chance to prove their worth, collect the big payouts and there were five racers that still had the chance at the Triple Crown Jackpot presented by Area 51 Fireworks!

Big Tire presented by Forty1Thirty Fabrications and Hughes Performance had Troy Baugh in his badass ProCharger-powered ’68 Camaro take the win over Doug Reed in his twin-turbocharged  ’66 El Camino. Both gentlemen were out of Redding, CA.

Small Tire presented by Accessories Plus and Speedwire Systems had the one and only Lamar Swindoll Jr all the way from Beach City, TX in his ProCharger-powered ’71 Camaro take out in the final, Ryan “Toaster” Jones of Los Angeles, CA in his turbo-powered ’65 Chevy Nova.

Outlaw 8.5 presented by Vortech Supercharges and Jaws Gear & Axle was dominated again by the Moorpark, CA-based top dog Manny Figueroa. Manny picked up the win and is still in the hunt for the Triple Crown Jackpot in his ProCharger-powered ‘95 Mustang over Travis Wallace’s nitrous-powered ‘95 Mustang out of Peoria, AZ.

Ultra Street presented by Induction Solutions and ProCharger is on fire right now with a little mix up. Mike Saiki of Team Motivational out of Long Beach, CA took the win in his turbo-powered ’72 Vette over Dan Dagata’s Induction Solutions nitrous-powered Mustang of Pomona, CA.

King of the Hill Index presented by Mickey Thompson Tires and Redtide Marketing & Design was an exciting combination of A/Gas, B/Gas, C/Gas and D/Gas racers! Bakersfield-based B/Gas racer Roger Stalnaker took another win in his rare ‘65 Corvair to keep him in the hunt of the Triple Crown Jackpot over our Series Sponsor and A/Gasser, Tom Fowler of Paso Robles, CA.

Super Pro presented by VP Racing Fuels and Jaws Gear & Axle was dominated by the local racer, Keith Winters. Keith took his ’99 Dragster to the winners circle after taking down Jason Dawson, out of N. Las Vegas.

Pro presented by VP Racing Lubricants and Magnafuel Products was taken over by Kayla Sewell out of N. Las Vegas in her ’13 Front Engine Dragster over Bryan King of Henderson, NV in his ’80 Camaro.

All of us at WCHRA would like to say, THANK YOU to all of our great racers, sponsors, fans and certainly the Las Vegas Motor Speedway staff! We couldn’t do it without each and every one of you! If you missed this one, don’t make the same mistake twice! “The Duel ” presented by Magnafuel Products will be held as another night race September 7-8 at Tucson Dragway! Watch our Facebook, Instagram and website for upcoming race information!