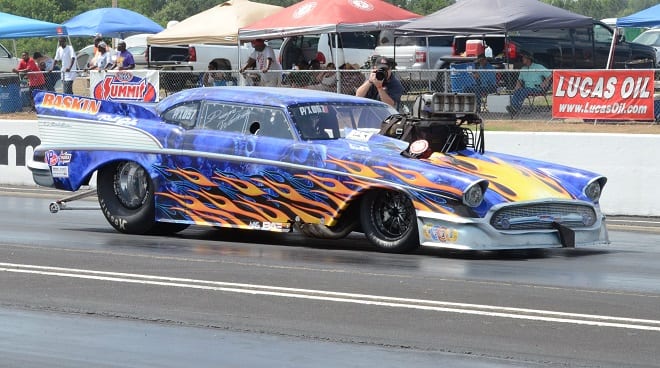 Drag racing, like many things in life, can be humbling at times. That was not the case for Outlaw Pro Modified front runner Dwayne Watkins in 2015. Watkins and his fan favorite ’57 Chevy dominated the Promodifieds.US Southern Shootout, winning five events enroute to the 2015 points championship.

The Southern Shootout series hosts no rules, outlaw Pro Mod racing at several facilities across the southern states. This type of no holds barred racing still thrives with the Southern Outlaws, a moniker bestowed years ago to the fearless group of outlaw racers doing battle at small racetracks in the region.

Watkins is no stranger to outlaw racing, winning many events throughout the years. But even he was admittedly surprised by the level of success experienced this season. The Southern Shootout consisted of nine events amongst venues from Memphis, TN to Atmore, AL. Of those nine events, Watkins advanced to no less than the semi-finals, reaching the final round of seven while winning a total of five races. The championship was clinched with two events remaining, and when the dust settled, Watkins compiled nearly double the points as his closest competitor.

As if that wasn’t enough, Watkins was also #1 Qualifier at five events. He claimed the Sullivan Farms Low ET Bounty on the strength of his 3.713 elapsed time during qualifying at Memphis International Raceway. The Glass Doctor Showdown, a mid-season shootout amongst points leaders at Huntsville Dragway, was also claimed by the Rosemark racer.

“Domination is the word that comes to mind,” stated Brian Cupp, owner of Promodifieds.US. “With the power these screw-blown beasts are making, clean runs can be a challenge on small tracks. In those cases, driving skills are at a premium. Dwayne clearly demonstrated his tuning skills by the number of huge runs he made during the season, but the number of round wins he obtained pedaling the car clearly illustrates excellent driving skills!” added Cupp. “There was no doubt who the favorite was at each event when Watkins rolled through the gates.”

There is an extra measure of satisfaction that comes with self-made success. The photogenic ’57 Chevy was assembled by Watkins in-house, utilizing a McAmis Race Cars chassis kit. All the fabrication and maintenance of the PSI screw-blown BAE Hemi, Lencodrive and Strange rear section is performed by Watkins and crew.

“This was an amazing year for us, just unbelievable the amount of success we have had,” stated Watkins. “This is a family effort and I cannot thank my wife Sheila, son Bubba and grandson Chris enough. Our crew is comprised of great friends Paul Raffanti, Eddie Hodgson, Rusty Shelton and Janice Frost, all of which pitched in to make this possible. I also would like to thank the man upstairs for blessing us with a safe, successful year.”

Watkins would like to send a special thanks to Baskin Auto Sales, RBS Construction, Rusty Shelton, Randy Cagle, Jeff Balton and the Kerley Family for their support in 2015.

Watkins Racing will return to action in 2016 looking to defend their 2015 Promodifieds.US Southern Shootout Championship.