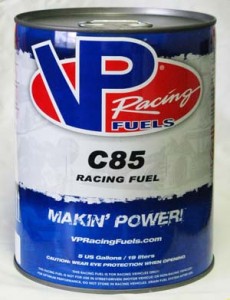 “Conventional E85 gained some popularity because it was cheap and made some power, but it has a significant downside,” said Kelly. “In addition to requiring a costly E85 carburetor and completely revamped and upgraded fuel system, E85 is corrosive and very inconsistent.”

“When you don’t know if you’re getting 60% ethanol, 80% ethanol or something else, it’s extremely difficult to tune,” Kelly continued. “Many engine builders have cited up to a two-jet swing in their tune from one batch of E85 to the next. By contrast, C85 is blended with the same degree of care and precision as every other VP fuel, with a consistent proportion of ethanol and every other component in every drum. It takes all the guesswork out of tuning.”

“With VP’s focus on power, we’ve engineered C85 to make up to 4% more power and torque than conventional E85,” Kelly added. “In addition to these performance gains, C85’s higher quality pure components make it superior to E85 in terms of cooling effect, resistance to detonation and we’ve added corrosion inhibitors to fight the issues presented by ethanol.”

C85 will work well in drag racing, oval track, off road and virtually any other automotive racing application, in particular forced induction applications due to its lower vapor pressure. Tests of C85 indicate most applications will require richening up by 1 jet size, or 2-3% over current jetting.

“For racers who have already made the financial commitment to use an E85-type fuel, C85 is the best choice,” Kelly said. “For racers who want more HP and torque than conventional 110 and 112 type fuels without the additional investment in an E85 carb and fuel system upgrade, VP’s MS109, VP113 and Q16 continue to be the best race gas alternatives for the money.”

All VP products are conveniently available from VP’s extensive distribution network throughout North America and around the world. Customers can locate their nearest VP dealer by contacting VP’s distribution centers listed athttp://www.vpracingfuels.com/vp-racing-dealers.html. Technical questions about C85 can be directed to VP’s tech support staff as follows: