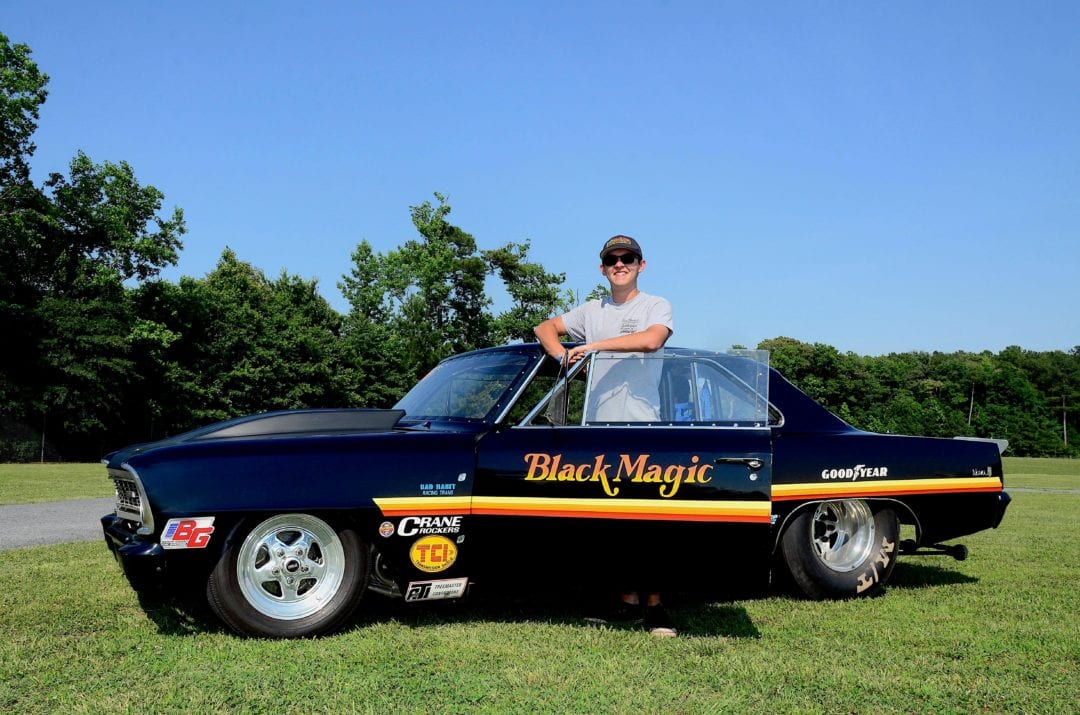 Sixteen-year-old Vance Usilton has been patiently waiting his turn to experience the euphoria that is “Black Magic,” a 1967 Chevy II that’s been a part of his family for many years. Usilton is excitedly gearing up to make some full pulls down Delaware’s U.S. 13 Dragway, an IHRA-sanctioned quarter-mile facility located in the town of Delmar, where his father, Hank Usilton, has raced a variety of cars for three decades.

The classy Black Magic Nova is a fan favorite with its throwback paint scheme, which amazingly, was applied 35 years ago. “This is the same paint job that the previous owner, Paul Hastings, put on the car years before my dad bought it,” Vance says. The body was gently removed about 10 years ago and Hank outfitted the car with a chrome moly chassis, after which, he carefully reattached the body. The car weighs 2,375 pounds with Hank in the driver’s seat, slightly less when Vance is buckled in. It’s motivated by a 406 c.i. small-block Chevy and has gone as quick as 9.18 seconds at 145 mph down the strip in Delmar.

Admittedly, Vance believes he got a late start in Jr. Dragster racing at age 14, when so many of his peers began much earlier. “My first year was humbling, especially when it came to taking care of the car, but I learned a lot,” he says. When he came back for his sophomore season, he turned on a few win lights, then picked up a win. He also qualified for the SBRA points and earned the opportunity to compete in the series finale at Mason Dixon Dragway in Maryland. “That was probably my funniest experience in racing to date. I went to the quarter-finals twice and the semis twice, and went home with some money!”

Some of his fondest memories include his father and mother loading up the family in the winter and heading to Florida with Black Magic in tow. His parents pull him out of school and take his homework with them, allowing them to compete in races at Bradenton and West Palm Beach. “The beaches, fishing and racing are awesome…I can’t get enough of it,” he says.

Back home in Maryland is where Usilton sometimes feels like a fish out of water. “The rich kids at the preppy private school I attend call me ‘redneck!'” he laughs. “That’s fine, they really don’t understand how complex this sport is.”

As he makes the transition from Jr. Dragsters to full-bodied cars, this second-generation racer hopes to put a spell on the older folks when he enters Top Eliminator competition at U.S. 13 Dragway later this year.